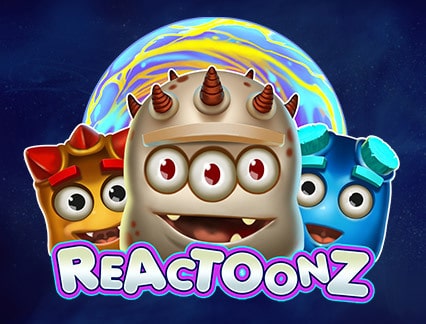 Want to play something beyond this world? Or maybe even beyond this galaxy? Then you’re at the right slot game! With multiple alien high paying symbols and special features, this Play’n Go online slot gives you wins like no other. This high volatility, 7x7 grid online slot, give a winning combination when at least 5 symbols are linked in a cluster. Reactoonz promises its players a 96.51% RTP, with all wins contributing to filling the 5 meters on the upper corner of the screen. If you manage to fill all 5 meters at one go, which by the way is really hard to do, a magnificent special feature will activate, but we will talk about that later.

Reactoonz does not have your typical playing cards in place of symbols; it has multi-coloured alien “monsters”.The minimum and maximum bet range from 0.20 to 100.

As a player, you will definitely be spoiled for choice when it comes to special features on this slot game.

Whenever 1 part of the meter is filled, a random feature triggers. The random triggers could be any of the following:

Instability: During the base game, if no there are no winnings, Gargantoon might drop four to eight wild symbols scattered around on the reels.

Once the quantum queue reaches the gargantoon, this feature is triggered.

Before the gargantoon moves, new symbols cascade down, filling the grid.

The game has some very unique features, that can seem confusing when you first start playing. Usually, this is because of the cascade triggers that might seem random at first. That together with the random Alteration trigger creates a lot of action on the reels, but also some confusion till you get used to the game. All in all, this game will keep you entertained, and if you didn’t understand what Reactoonz is all about, just press autoplay and wait for the special features to hit.