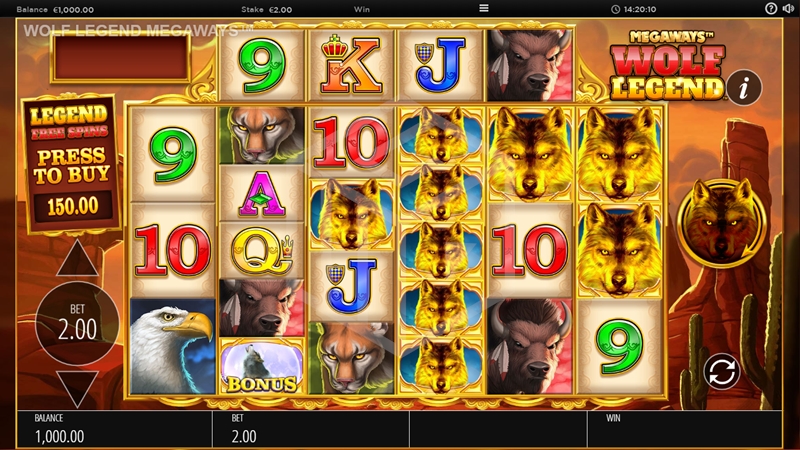 As I mentioned earlier, the design of this slot is very similar to Buffalo Rising, set in the hazy sunshine of the North American wilderness. Rocky outcrops and cactuses surround the 6 reel gameboard which comes with a horizontal reel of 4 symbols above reels 2-5. During the bonus round the landscape remains the same but darkness falls over the eerie desert landscape.

The low value symbols are the standard 9-A royals. Higher value symbols come from the animal kingdom; eagles, bison, cougars, and golden wolves. The golden wolf is by far the highest paying with 6 adjacent symbols paying 50x the bet size. A gold framed landscape of a sun scorched North American desert is the mystery symbol, and the scatter symbol is of a howling wolf. 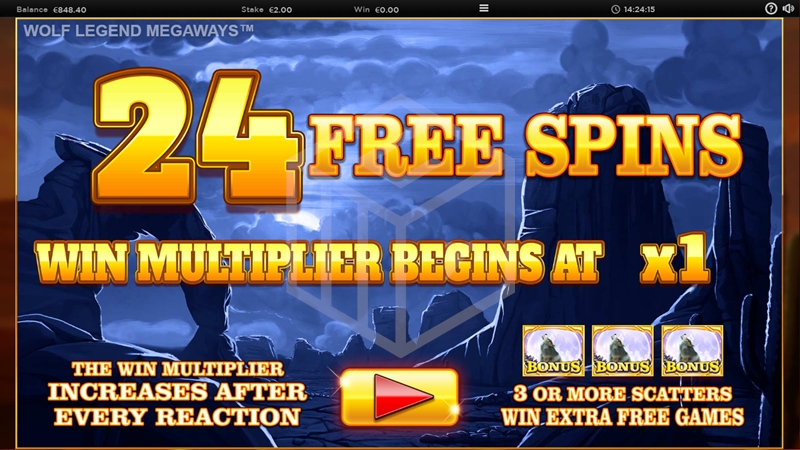 Wolf Legend Megaways benefits from the popular cascading reels feature with win streaks. Mystery symbols can also facilitate decent wins in both the base and bonus game. The main feature is a free spins round with an interesting gamble feature. As previously mentioned, there is also a buy-a-bonus feature.

After a win lands, the symbols making up the win disappear. Symbols above those which have been removed drop down to fill the gaps, with their place being taken by new symbols appearing from above.  Any new win created by this process allows the cycle to repeat. This continues until no new win is created at which point a new spin will begin.

If the mystery symbol lands, it tends to do so in abundance. At the end of the spin the symbols will all transform into the same randomly chosen regular symbol. Although the landing of mystery symbols do not guarantee a win, the vast majority of the time their appearance results in a win of some sort.

The gameboard is cleared of all symbols except for the scatters landed. These scatters are each transformed to reveal a number of free spins between +1 and +5. The reels then spin which may or may not result in one or more other scatters to drop onto the reels. This ‘Golden Streak’ ends when no new free spin scatters land. When your allotted Golden Streaks end a gamble screen appears. Here you have the option to gamble for another 1, 2, or 3 Golden Streaks before commencing free spins. Your likelihood of winning is shown by wheel of fortune with a spinning golden needle. The wheel is bisected into a blue and a red portion. Land in blue and you win, land in red and you lose. The more Golden Streaks you try to gamble for, the lower your chance of winning. If you lose, you miss out on the entire bonus round so beware. Additional free spins are also up for grabs during the bonus round. If you land 3 or 4 scatter symbols across the top reel another 5 or 10 free spins are awarded.

A popular and lucrative feature among many Megaways slots, each win during free spins adds one extra win multiplier. The multiplier figure will not reset after a losing free spin. The cascading reels feature is also in play throughout free spins.

One can gain immediate access to the free spins feature by splashing out 75x your chosen stake rather than through traditional gameplay.

Here's our list of the best bonus buy slots that you can have a look at if games with this feature is of interest to you.

Our Thoughts on Wolf Legend Megaways 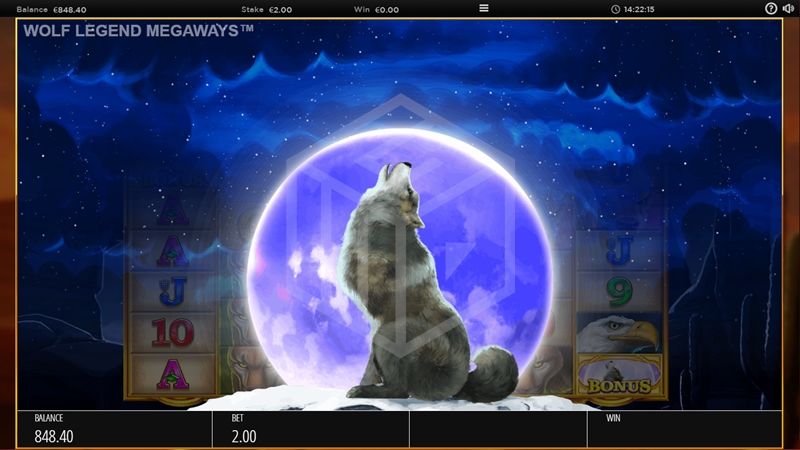 Despite its similarity to Buffalo Rising in particular, Wolf Legend Megaways is still an awesome slot to pay. Firstly, with a maximum win of 50,000 the stake, the potential here is considerably higher the Buffalo Rising. Secondly, the Golden Streak feature with the gamble option adds that little unique twist that every new Megaways slot ought to have at this stage. Having played the game for several hours it is evident that starting a free spin round with 15-20+ spins is a real possibility – and that can add up to some serious wins.

Also, being an advocate of buy-a-bonus features I’m pleased to see this option available for us risk-takers. Buying straight into the bonus also offers a slightly higher RTP of 96.5%.

Well done to Blueprint for continuing to innovate and helping to keep the wonderful Megaways series such a blast.