As tends to be the case with most new games these days the graphics on display here are slick, colorful and superbly detailed. Wild Swarm is a fun game, and the cartoon graphics and the background music really add to the vibe. The music comprises woodwind instruments depicting the woodland sounds, percussive bells and sounds represented the enchanted theme, and plenty of busy strings to symbolize the busy bees hopping from flower to flower collecting nectar.

The four lowest value symbols are wooden versions of J, Q, K, & A. These are followed up the pay scale by a purple flower, a white flower, a honeypot, a grinning Queen Bee, and finally a Dollar Sign dripping in honey on a honeycomb background.

Other symbols include a standard wild tile, a collectible bee which flies off into the central hive (more of which later) before also becoming a wild, the scatter symbol – in this instance a beehive, and a pink and gold chest which triggers the chest ‘pick’ feature. 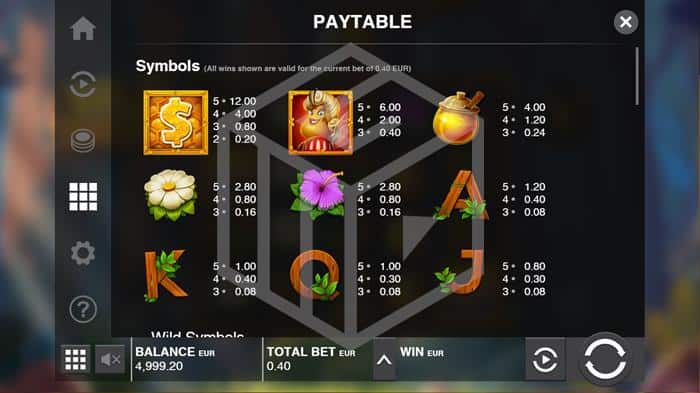 Wild Swarm has a nice variety of special features including a scatter triggered the free spin bonus, a picking bonus activated by the appearance of a hexagonal chest, and the wild swarm bonus for those extra loyal players who are committed enough to activate this hard-fought bonus round.

One of the reasons for the "buzz" surrounding the Wild Swarm slot is the infamous Wild Swarm mode. It is by far the toughest feature to trigger, and this one really rewards players willing to put in the spins. Every time a ‘collectible bee’ lands, it flies off into the central hive, this will then partially fill a dial to the right of the board. When the dial is completed one segment of the ‘Swarm Mode’ feature is completed.

Complete all five segments and you’re in with a chance of a big win as any collectible bee which lands after all segments have been completed could cause the hive to explode, activating Swarm Mode which awards you 10 free spins with sticky wilds. 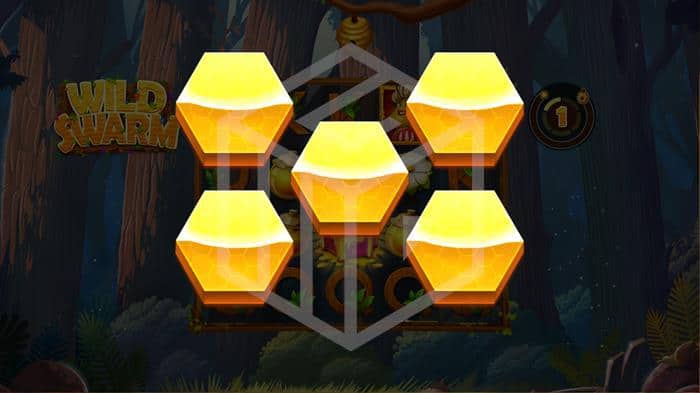 If the hexagonal pink and gold bonus lands anywhere on the board, then a ‘pick’ bonus is activated. Five golden hexagonal honeycomb symbols fill the screen, each showing a different win. After a brief mix of the symbols, you pick one to reveal your win.

Most wins are multipliers of the win for hitting the chest (the win is 1x your stake) which range from 2x up to 150x, although other wins which may appear are a random number of free spins, a completion of one Swarm Mode segment, or if you’re really lucky an immediate trigger of Swarm Mode. 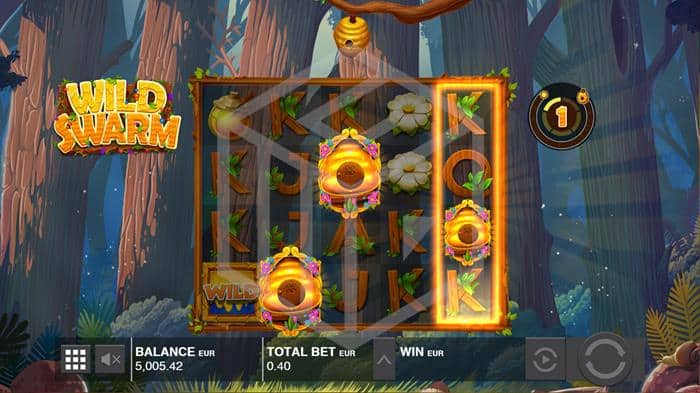 Collect three hives scatter symbols anywhere on the board, and you’ll receive seven free spins with sticky wilds. The sticky wild symbol is of a bee in a frame dripping with honey. Build those wilds up earlier, and this feature can pay out well.

If you hit the chest bonus during free spins, you may be awarded up to 5 more free spins, expanding sticky wilds, or shifting wilds (where all sticky wilds shift once to the left) which will really help you build up a substantial win.

Wild Swarm slot? Hands down is an extremely playable game. The base game offers a player enough wins to keep them interested, while the bonus games are all decent, with each capable of landing a big win.

How capable exactly? Check out NickSlots Wild Swarm Big Win on YouTube, after triggering the wild swarm, swarm mode on a £6 bet.

Also, with an RTP of over 97%, it’s a great value slot. At a push, it could be argued that the features, especially Swarm Mode, could appear a little more regularly. However, in order to facilitate that the potential wins would have to be diluted, which may take away a little from the game’s appeal. As it stands, we think Push Gaming has got the balance just about right.