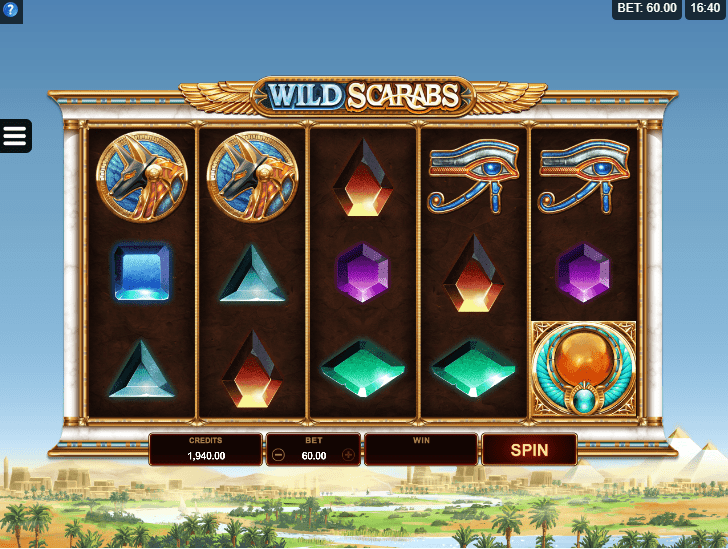 Enter an Egyptian oasis full of palm trees and pyramids in this Ancient Egyptian themed slot game. The higher paying symbols include the wild scarab itself, followed by a representation of Ancient Egyptian Gods such as Ra who has a head of an eagle in place of his own and was worshipped as the creator of everything. Anubis, who has a head of a jackal in place of his own and was worshipped as the god of the embalming and the dead also makes an appearance here. You will also find a number of Egyptian symbols such as the eye of Ra and the ankh, a symbol of immortal life. The lower paying symbols are clean cut diamonds that come in different shapes and colours. As for the music, there isn’t anything new going on here. Take the background music in other Ancient Egyptian themed slot games such as: Temple of Tut and Legacy of Egypt. All of these together with Wild Scarabs have a very similar sounding soundtrack as the background music of their slot game.

When it comes to special features in Wild Scarabs, you get a round of free spins, stashed wilds within those spins and a wild deal to trigger during the base game. Much within the name, all the special features here revolve around one thing: a wild scarab symbol.

If a wild lands on reel three and is part of a non-winning spin, the Wild Deal is triggered:

All wilds that did not form part of a winning combination are collected and form part of the stashed wilds during free spins.

The first thing we noticed was that two out of three special features were different from your typical slot games. However, we have to point out that these "unique" special features are painfully identical to another Microgaming slot game: Dragonz. We've already explained the similarities at the beginning of our review.  We also liked the fact that the lower paying symbols were not your typical card symbols. Having said all this, the design and symbols, as well as the music, have all been a bit over-used at this point. When opening a slot game of this theme, we could tell what kind of characters will be representing the higher paying symbols; no need to google the Ancient Egyptian Gods anymore.