As I might have already indicated, Wild Frames has a fairly nondescript design. It doesn’t look dated or poorly designed, its more of a no-nonsense ‘what you see is what you get’ type of slot. It’s possible this is the reason for the blandish Vegas type design; it’s all about the game, not the story behind the game.

The action takes place on a 7x7 grid filled with classic symbols. The background is a simple yet elegant animation of large, diamond-shaped purple tiles slowly and independently rhythmically gliding up and across the screen. To the right of the gameboard is a gold ‘charge meter’ which counts the combined number of symbols collected from consecutive cluster wins. The meter counts down the number need to progress to the next ‘charge level’. Above the meter is the Wild Frames logo, designed like one of the neon signs above a Vegas casino.

Low-value symbols are the four card suits. High-value symbols are bells, stars, diamonds, and red sevens. The red sevens are the highest paying symbols. Sevens pay 3x the stake for a cluster of 5 up to 500x the bet size for 30 or more. There is also a big ‘W’ wild symbol.

Symbols forming part of a winning cluster disappear after the win and are replaced by symbols cascading from directly above. A new winning combo caused by a cascade results in another cascade. A non-winning cascade ends the current spin. 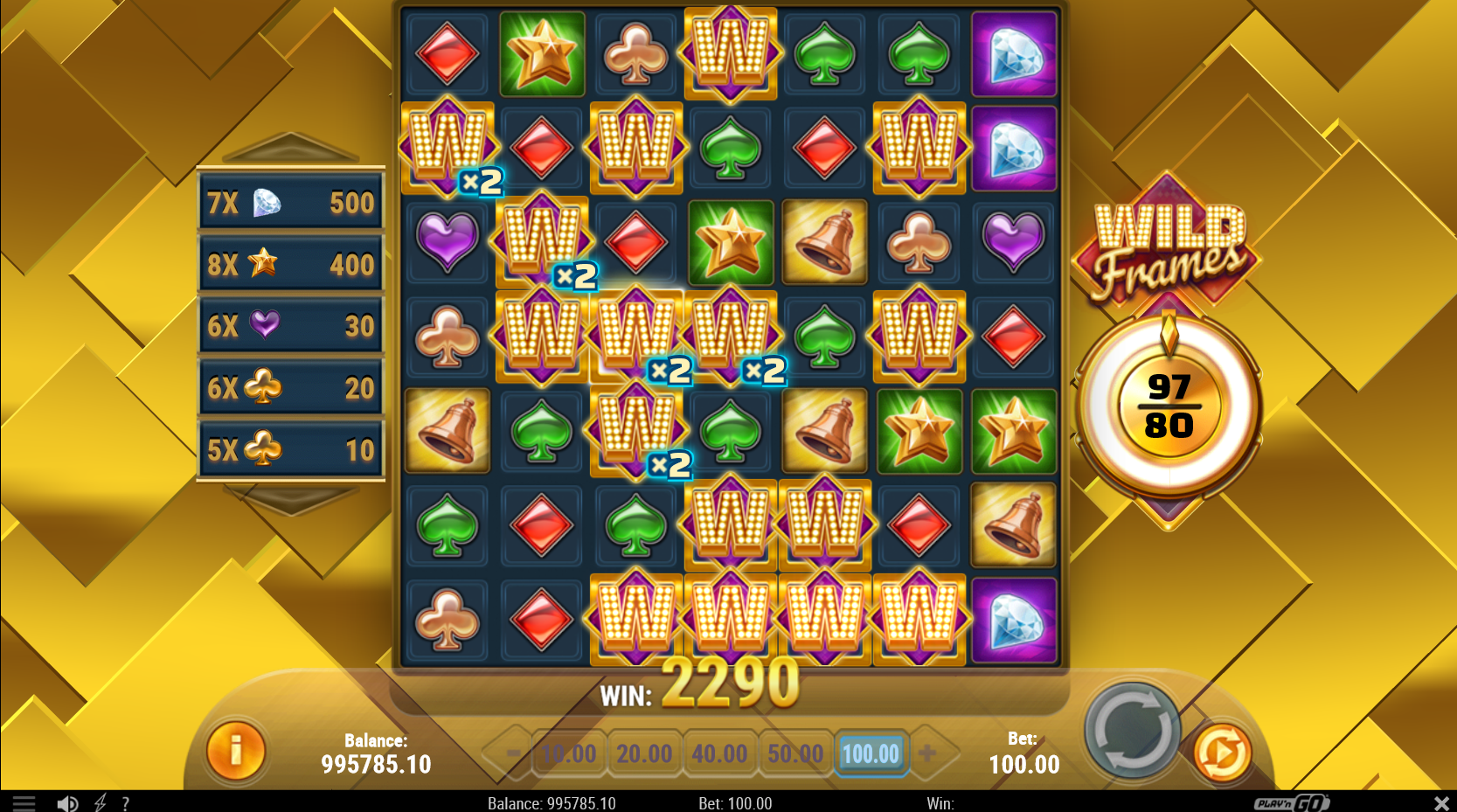 Every wild creates a frame around the space it lands in. The frame remains in place for as long as the same spin is in play. Although the frame remains, the wild only remains in the space until it cascades down or forms part of a winning combo. When the wild evacuates the space, other regular symbols cascade into the space. Another wild cascading into a framed space upgrades it to a 2x win multiplier. Further wilds landing in this space upgrade the win multiplier up to 9x. However, these multipliers are inactive until the charge meter reaches 80 (we’ll come to that).

Randomly activated after a non-winning spin, the Wildcard feature shoots between 3 and 6 wild symbols onto the board.

The charge meter counts all symbols which form part of concurrent and consecutive cluster wins. The meter triggers a new reel modifier for every 20 symbols landed (up to 80) during a winning sequence. All modifiers are applied only after the current winning reaction concludes.

Our Thoughts on Wild Frames

Although thematically and visually undynamic, Wild Frames is certainly not a slot you should judge by its cover. As much as I enjoyed Honey Rush, and the similarities are very obvious here, there’s something about Wild Frames which, for me at least, ramped up the enjoyment considerably. Ironically, I think that part of it was that I was able to get to grips with the more standard 7x7 grid set up easier than the more innovative honeycomb design of Honey Rush. Also, the charge meter features added a little more variety to proceedings.

There’s something about the excitement of gunning for the top end of that charge-meter that I find irresistibly engaging, and as such, every spin is filled with anticipation. At the end of the day if you find yourself excited for the next spin then that can only be good news for both you and the game provider.