Who Wants To Be A Millionaire Mystery Box

Play Who Wants To Be A Millionaire Mystery Box on 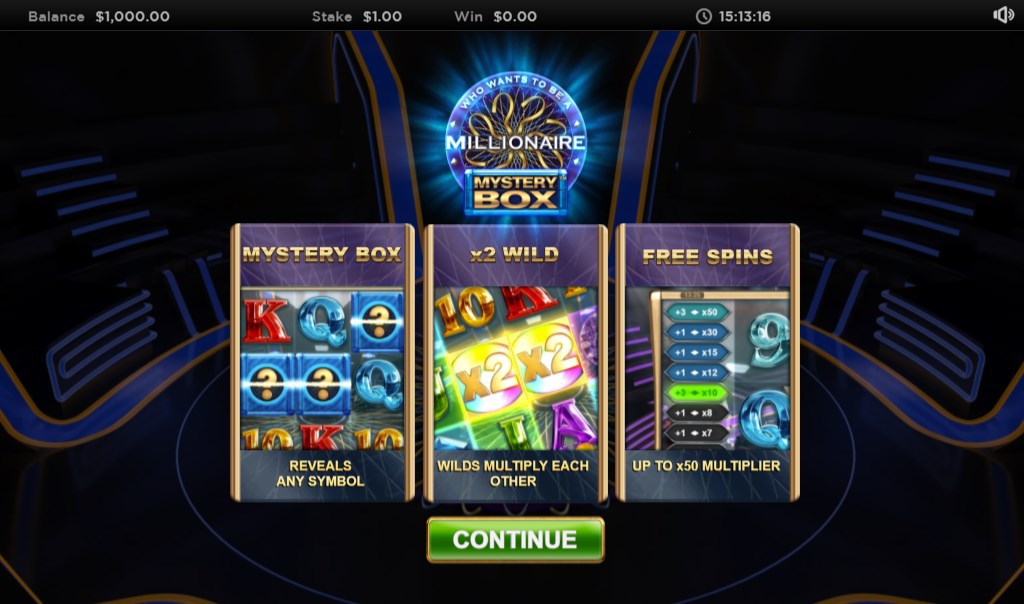 BTG didn’t have to think awfully hard about the design work for Millionaire Mystery Box as it pretty much replicates the design used in Millionaire Megaways™ - namely that it recreates the TV game show set.

Banked rows of seats with blue neon strip lighting lead down to the circular logo which fills the main stage on which the player and question master face each other.

The studio set is all deep, dark blues, illuminated by beams from well-positioned spotlights. The gameboard sits centre-screen, has translucent reels and is framed as it to resemble a screen or monitor.

Low-value symbols are the standard playing card values 9-A. High-value symbols are coloured gems; green, blue, red, and purple. As is the BGT way, purple is the most valuable regular symbol with 5 across adjacent reels awarding 25x.

The wild has a multi-coloured background with a 2x multiplier and the scatter is the game’s logo which is also the highest paying symbol of all with 5 awarding 200x the bet size. There is also a Mystery Box symbol which appears as a question mark on a blue background.

The Mystery Box™ symbol only lands on reels 2, 3, and 4. At the spin’s conclusion, all Mystery Boxes transform into the same randomly selected symbol which can include all regular symbols as well as 2x wilds and scatters.

Triggered by scatters, the free spins round comes with a 12 rung Multiplier Ladder designed to look like the win level meter displayed during the TV show.

Landing scatters progresses a player up the ladder with each scatter worth one step up.

The win multiplier increases with each rung, with the multiplier value shown on the rung. Also, every rung on the ladder awards an additional free spin except for rungs 4, 8, and 12 which all award an additional 3 free spins.

Reaching the 12th and final rung brings the win multiplier up to 50x for every win landed. This is the highest possible multiplier, although when at the 12th rung, a fresh free spin is still awarded for every scatter which lands.

Big Wins on Who Wants to Be A Millionaire Mystery Box

As such, we do not yet have any recordings of big wins happening on Who Wants To Be A Millionaire Mystery Box slot.

Wanted: If you win big on Millionaire Mystery Box, we encourage you to share it with our 23.000+ members on the CasinoGrounds forum. Click on Epic Wins (1000x and beyond) and create a thread. Remember, really big wins have the chance to get featured in our big win compilation videos on our official YouTube-channel.

Big Time Gaming would likely have paid a king’s ransom for the rights to emblazon their slots with the “WWTBAM?” livery so they might as well make the most of it. Having already given the iconic game show the Megaways™ treatment, the 243 ways-to-win reel mechanic is employed here.

Working alongside the multiplier wilds and Mystery Box™ feature this can produce some pretty hefty base game wins.

It certainly keeps the base game interesting as of course what you’re really playing this game for here are the free spins.

The free spins round can be pretty epic if it is feeling favourable, with potentially unlimited free spins and a 50x win multiplier in play.

The 12,000x maximum win is more than enough potential to attract almost any slot player, and the pull of a big name such as Millionaire could once again bring the punters flocking.

While not as much of a beast as last year’s Millionaire Megaways™, this slot still has a lot to offer. Millionaire Mystery Box is certainly a worthy addition to the ‘WWTBAM?’ slot series.