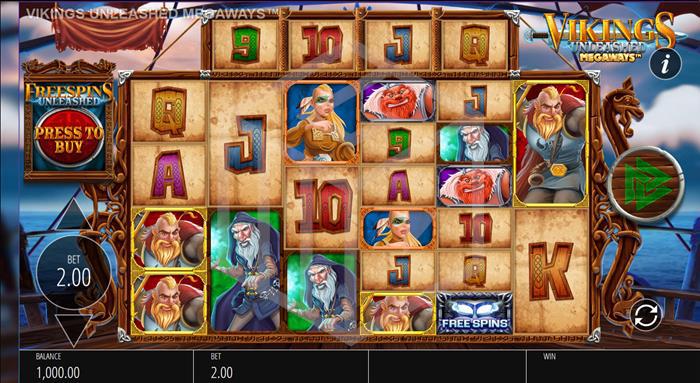 Vikings Unleashed comes with an awesome design. The game board appears centre-screen and is being transported across the seas at the front of a Viking Longboat. The background shows the front of the ship crashing into waves in an ongoing animation. The symbols appear in detailed cartoon form sitting on the parchment-type design of the game board. Viking horns and heavy percussion lend an air of Viking menace to the soundtrack. The game board is six reels across and each reel has between 2-6 symbols, randomly assigned on each spin. In addition to this, there is an additional row above the main game board which only sits above reels 2-5 meaning that those reels can carry up to 7 symbols in total.

The low-value symbols are the standard 9-A royals with the higher paying symbols represented by a sorcerer, a female warrior, a Berzerker and a blond-bearded male Viking. The male Viking is the most valuable symbol with 6 on a pay way row paying 50x the bet size – this is way higher than the second highest paying symbol which pays 7.5x and the third highest paying which only rewards 2x the bet size for 6 symbols. There is a standard wild symbol which only appears on the top row of four symbols, and there is a free spin scatter symbol which can appear on any reel. There is also a mystery symbol, another recurring feature for some Megaways ™ games, which comes in the form of Thor’s hammer.

Whenever a win lands the symbols which make up that win will disappear, temporarily leaving black spaces in the reels before new symbols cascade down from above to fill the empty spaces. If the newly cascaded symbols trigger another win then that will be added to the spins win total and yet more symbols will cascade into their place. Cascading symbols end when they do not help to form another win. 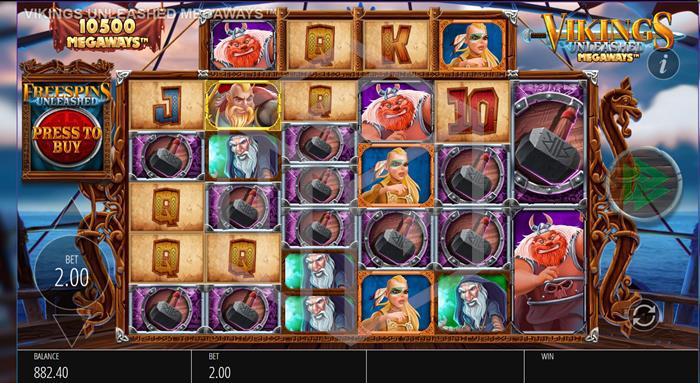 You will occasionally land the mystery symbol, Thor’s hammer. When the mystery symbol appears it never lands in isolation and you will regularly land between 5-10 or more across the board at any one time. After they had landed all mystery symbols flash red before turning all turning into one of the regular symbols (the same one), which often brings in an instant win.

Free spins are triggered by landing 4 or more scatter symbols anywhere on the reels and will reward you with 12 free spins. Land any more than 4 and you’ll receive another 5 free spins for each additional scatter. Once in the feature, you’ll first be taken to a gamble screen where you can gamble both the number of spins and for additional multipliers. You’ll start at a 1x multiplier and to gamble you’ll spin a wheel which is predominantly green with a small section of red. As long as the red section doesn’t end up at the top of the wheel after the spin then you’ll win the gamble. This is the same for both wheels (spins and multipliers). You can gamble up to a starting 10x win multiplier and up to 27 free spins. From our experience the ratio of red/green is accurate, and you’ll certainly win your gambles a lot more often than you’ll lose – although be careful as if you lose then you’re kicked out of the feature, and it takes quite some time to trigger those free spins! 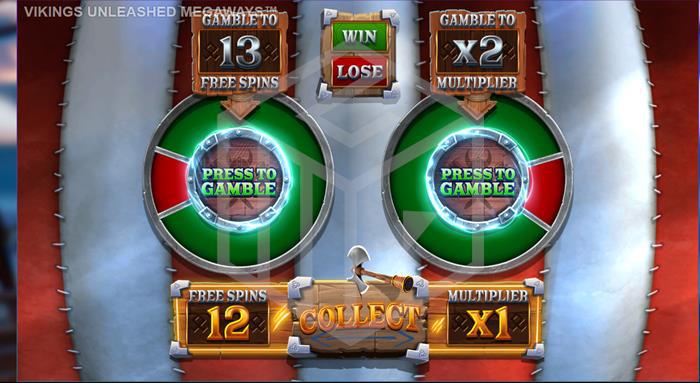 Once in the free spins, you will earn an extra 1x multiplier for each win you land, and once again cascading wins are in effect. These multipliers are unlimited and during our test games, we often rose well above a 20x multiplier which brought in some sizeable wins. 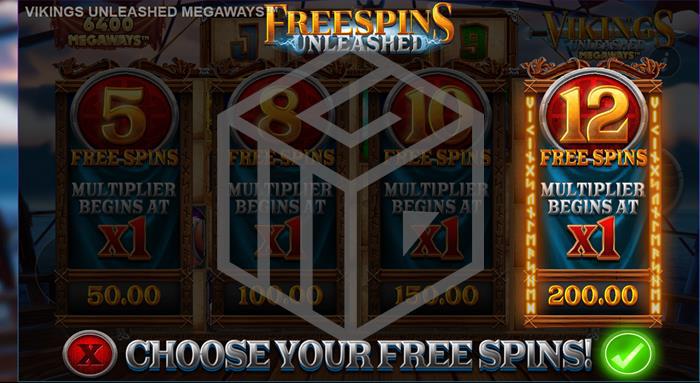 We are always happy to see the inclusion of a buy-a-bonus feature on any game, especially highly volatile games like Vikings Unleashed Megaways™, it gives the hard-core gamblers a chance to get straight into the thick of the action, because let’s face it, the free spins round is what this game is ultimately all about. There are five different prices at which you can buy straight into the free spins unleashed round, and with each jump in the stake, the RTP increases a little. The five options are as follows:

It may seem a little much charging an additional 25x the stake for the final two free spins between 10-12, but it’s worth bearing in mind that the more spins you have, the higher the multiplier is likely to be, and that is where the real money is made. Just as with the regularly triggered free spins, you are able to gamble both the number of free spins and the multiplier.

Our list of the best bonus buy slots have even more games with buy-option, if that's of interest to you.

Our Thoughts on Vikings Unleashed Megaways™

Another superb game from Blueprint, and another great use of the Megaways™ mechanic. Sure there are some similarities with other Megaways™ games and some people might complain about that, but then again how many games have a 5x3 reel set with 20 fixed pay lines? Personally, I believe Blueprint are evolving with every new release and the addition of the gamble feature is a winner as far as I’m concerned. And although it’s not the first Megaways™ slot to offer buy-a-bonus I like the fact that there are several entry points so that perhaps some of the more conservative punters can opt to give it a shot. Add to this the great design and a hugely popular theme and Blueprint can rest easy that this should be yet another successful release.