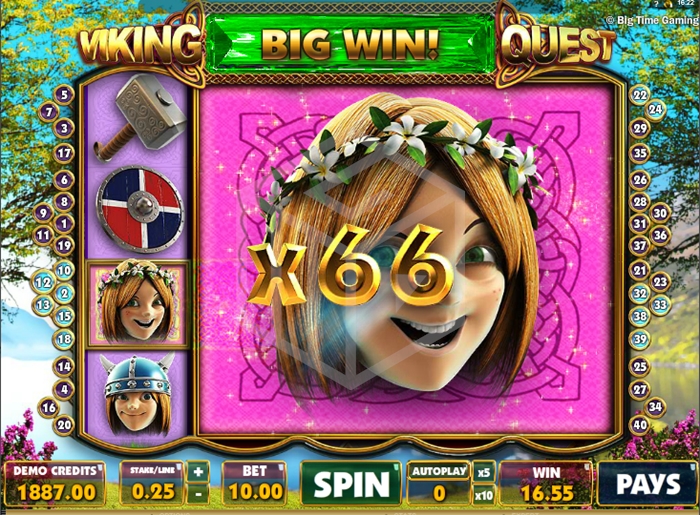 Viking Quest is set in a peaceful meadow with the trees and blossom in full bloom. Birds chirrup away merrily in the background while the action takes place inside a gold framed game board. The symbols sit on a lilac background and include a bunch of happy cartoon characters and Viking apparel. The character artwork brings to mind the central character of NetEnt’s Jack & the Beanstalk rather than the devious or warrior-like characters normally associated with Viking themed slots.

From lowest to highest value the symbols are represented by a boyish looking Viking, a maiden, a shield, a hammer, a green haired troll, and a crazy jester. The jester pays 12.5x the bet size for 5 on a a payline making it the most valuable regular symbol. The wild actually pays higher, awarding 25x the bet size for 5 on a payline. Other symbols trigger features and they include a free spins symbol, a treasure chest, and a salmon.

As well as a highly lucrative free spins round Viking Quest also benefits from several other features. There are Mega Icons in the base game as well as a treasure chest pick bonus and an angling bonus triggered by landing special symbols.

Mega Icons are symbols which cover either 2x2, 3x3, or 4x4 regular symbol positions. All symbols can appear as Mega Icons which can produce some epic wins.

The Mega Scatter Salmon icon triggers this feature when all or part of it lands on the game board. The Salmon can cover up to 16 positions on the board and for each position covered a ‘cast’ of the fishing line is awarded. Cast your line down into the sea to catch a fish. Fish award line bet multipliers and the deeper the fish caught, the more it will be worth. You can win up to 4000x per cast with a maximum of 16 ‘casts’ meaning a win of 64,000x the line bet is possible.

The Mega Scatter Chest icon triggers this feature when it lands on the game board.  For each position taken up by the Mega Icon a chest is awarded. The player must then select a chest which will award a multiplier of between 90x and 20,000x the line bet. 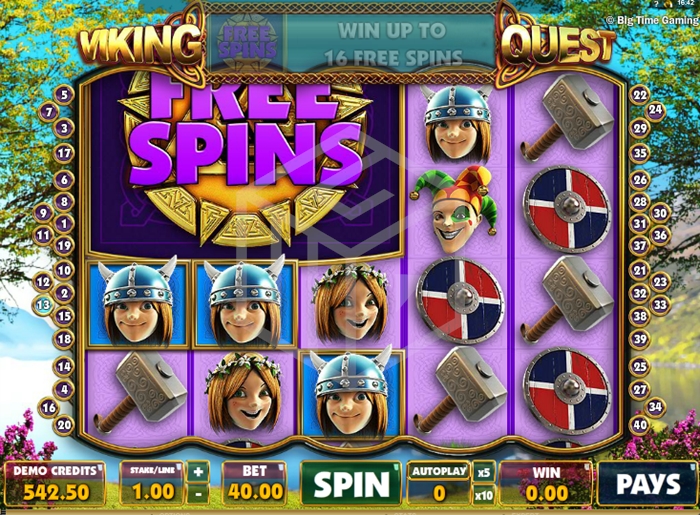 The Free Spins Mega Icon triggers this feature. Up to 16 free spins can be won depending on how much of the Mega Icon lands on the game board. Mega Icon symbols appear between reels 2-5 on every spin, meaning that there is potential for huge wins here.

Our thoughts on Viking Quest

Viking Quest is a very playable slot from Big Time Gaming. A happy Viking game is an amusing break from tradition but one we’re all in favour of. The line wins aren’t huge but the Mega Icons can really make those small wins add up. Also the selection of features makes Viking Quest an interesting slot to play. Both Gone Fishing and Chest of Fortune have fine potential, and Free Spins can produce very nice wins indeed. Perhaps a little bit more volatility would be nice, but to be fair we managed some very healthy wins of several hundred times the total bet size on a few occasions.