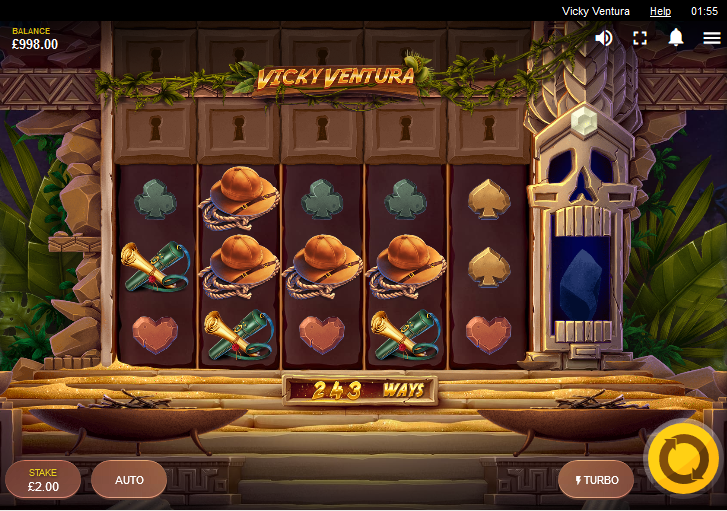 Red Tiger have upped their game a bit on the design front since Lora the Explorer cracked her whip in Golden Temple. The setting, as with more slots than I could mention, is at the entrance of ancient temple in a forgotten forest/jungle. The game board sits at the entrance of the temple. To the right of the game board is a stone pillar carved into a haunting screaming skull. Above the 5x3 reel set are rows of fixed stone symbols with keyholes – ready to be unlocked. Behind and above the temple, lush green vegetation sprouts from the jungle floor.

icky Ventura is the wild, and the scatter simply reads FREE SPINS, framed in gold. There is also a Mystery Totem symbol, a blue crystal with a skull, which activates a base game feature.

Vicky Ventura benefits from the Mystery Totem base game feature and a scatter triggered free spins feature with unlocking reels.

If a pulse hits one of the locked stone symbols on the first row above the regular reel set it will become a wild. This will also open up more ways to win, although once any wins have been counted, the wild disappears. 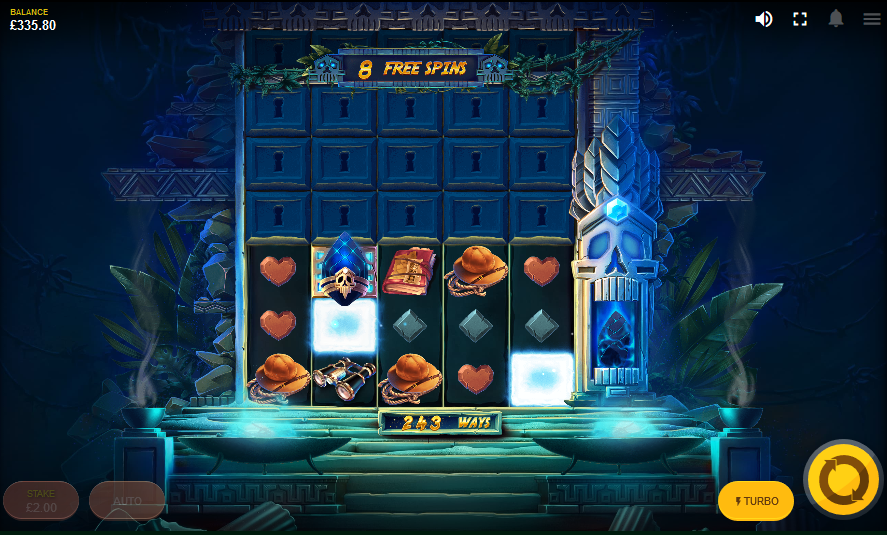 3 scatter activates 10 free spins. During free spins the number of locked rows above the reel set increases to three, and all can be hit during the Mystery Totem feature to reveal a wild symbol. Also, once unlocked, these positions will remain unlocked for the duration of the free spins, although will not remain wild.

This has the effect of significantly increasing the ways to win. Free spins can also be re-triggered, whereupon a fourth additional locked row come into play. Unlock all four reels for a maximum 16,807 ways to pay.

Our Thoughts on Vicky Ventura

Vicky Ventura has great potential and an interesting, if not totally unique, ways-to-win mechanism. Both features complement each other well when working together, and the base game Mystery Totem feature can bring in some tasty wins outside of the bonus round too.

Inevitably, however, it is the bonus free spins round where the real potential lies – and when it pays, it really pays. I would say thought that from admittedly limited experience, that bonus round is pretty hard to trigger, and it does have a habit of awarding some underwhelming wins compared to the effort it takes to get there.

Mind you, in order to pay out those 10,000x wins, there are going to be lean times for others.

This is a relatively minor quibble though. On the whole this is one of the better temple/adventurer slots with good visuals, engaging features, and a fab reel mechanic. Recommended.

Tip: Take our Casino Index for a tour if you’re looking for secure and top-rated places to play at. Click here and check out the filtering options that allow you to sort all the casinos we’ve listed by game providers, payment methods, and much more.