Vampires, which was released in May 2017 by Merkur gaming, is a 5 x 3 reel high volatility slot with a mere 5 fixed pay lines, and an RTP of 96% 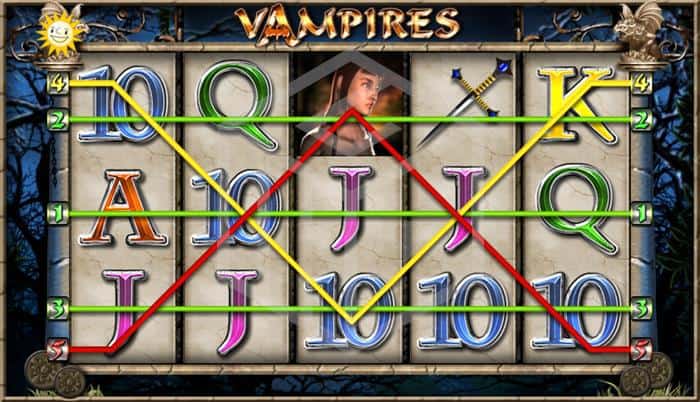 The theme, as you might have guessed from the title, is of a vampire tale with some good-looking young protagonists in the lead roles (wonder where Merkur came up with that idea?). This slot will suit the bankroll of even the most miserly of players with spins starting at just €0.05 and going all the way up to €100 per spin.

To be honest the design of Vampires is relatively basic by today’s standards. The background of a moonlit winter forest is creepy enough, and the game board stands out well, showing the symbols brightly and clearly on stone reels with a stone border, but there isn’t too much else to say about the animation, soundtrack or graphics in Vampires. This isn’t to say that they don’t do the job – but there is very little original thought on display here. 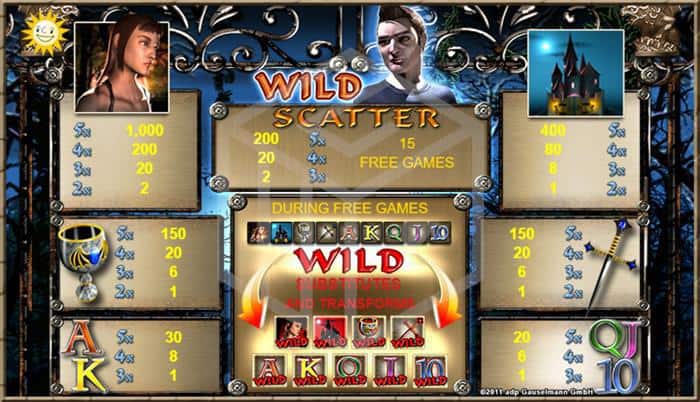 The low value symbols are represented by the standard 10, J, Q, K, and A while the higher value symbols take the form of a dagger, a silver goblet, a moonlit castle, and a young, serious looking woman. The wild and scatter are the same symbol, represented by a young vampire who somewhat resembles Robert Pattinson’s character from Twilight.

There is one main special feature, the free spin round, and a side-feature enabling you to gamble wins made in the base game.

Wins made in the base game can be gambled, either by correctly guessing the colour of a card chosen randomly from a deck, or by gambling up a ladder with increasing cash values. However, as wins can only be gambled up to a maximum of €140 (no idea why?), it’s not much use if you’re a high roller where many of the wins will be too high to even use this feature. 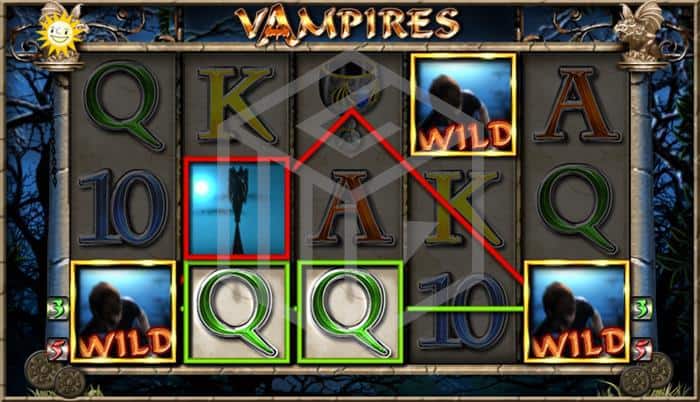 Land three wilds/scatters and you enter the free spin feature where you are rewarded with 15 free spins. This is where Vampires gets interesting. Every time you make a win using a wild symbol, bats will flee that wild symbol and replace the other symbols used to make that win with additional wilds. As the free spins progress you’ll be filling more and more of the reels with wild symbols and before you know it you’ll be collecting some substantial wins. As Vampires is only a 5 pay line slot, every win is relatively good, and five of a kind for any symbol will pay big.

Our Thoughts on Vampires

To be honest, if you’re looking for a well-crafted, innovative, interesting, and well-designed vampire game then we’d suggest giving Vampire a miss and giving good old Immortal Romance a try. However, if you’re all about one big pay-off and don’t mind spending 99% of your session going through the motions in order to get to that free spin bonus, then this game might well be for you. I’m not being sarcastic here either, it genuinely is a thrill to land these free spins and a joy to watch the big wins inevitably rack-up. With a 96% RTP high volatility slot you know you’re always playing for the bonus round, and if you manage to hit it early in your session there is every chance you’ll walk away a big winner.