The animation and graphics for Valkyrie are very impressive, especially coming from a relatively small operation like Elk Studios. The intro clip is suitably thrilling, mystical, and warrior-like (if a little baffling – Norse Mythology can be a tad confusing to me!). The game is set on the battleground of Midgard, and this provides the backdrop to the game board, with the ever watchful Norse Goddess Freya watching the action from the side, ready to leap into action during the bonus rounds. The lowest value symbols are represented by J, Q, K, and A, followed by the Hammer of Thor, the Midgard Serpent, Fenrir the wolf and Golden Gauntlets. The highest value symbols are of the goddesses, Gane, Helena, Andora, and Tyrsa. With the highest value only paying 4x bet size for 5 of a kind, and so many symbols on the board, hitting a big win can be tricky. Other symbols in the base game are the wild, which is a golden shield with the face of Odin, the free spin scatter symbol, and a bonus symbol (a blue circle with some intertwined triangular symbols in the centre and the word ‘Bonus’ at the bottom).

The base game benefits from ‘Epic Symbols’ while three or more bonus symbols trigger one of three base-game ‘Valkyrie features’, and three or more scatters award Valhalla free spins.

As well as appearing both as single squares and as stacked symbols, regular symbols can also appear as ‘Epic Symbols’ of either 2x2, 2x3, or 3x3 in size. These can help land some big wins.

When the game board goes dark and lightning strikes it means you’re about to land 3 or more bonus symbols and will be taken to one of three ‘Valkyrie Features’. The more bonus symbols you land, the more likely the three features detailed below are to pay big:

Our Thoughts on Valkyrie 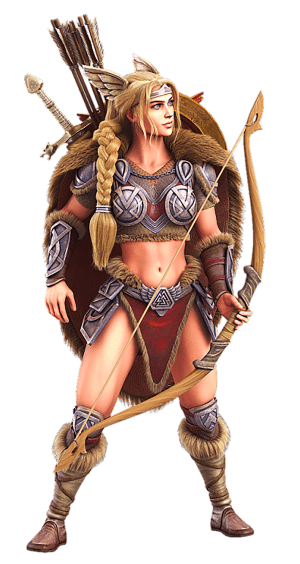 The Norse Mythology theme seems a very popular one at the moment with a glut of Viking and Valkyrie slots already available (our pick would be NetEnt ’s new release, Vikings) so Elk have decided they want in on the party, and to be fair they’ve done a decent job. The design and soundtrack are excellent and there are enough features to keep the feature lovers entertained. Even little touches like the Epic Symbols inject a little bit of excitement into proceedings. That said, the payouts in the base game still tend to be rather small and it can get a little depressing seeing so many wins of just a fraction of the bet size roll-in. We also found the free spins incredibly difficult to hit, and when they did we didn’t exactly hit the jackpot (which, incidentally, if you hit a full screen of the highest paying symbol is over 4,000x the bet size – a very nice amount!). This isn’t necessarily a damning critique, however, as Valkyrie is promoted as a highly volatile game and sometimes you just have to eat a plateful of small or mediocre wins in order to hit that monster win you know is lurking just around the corner.