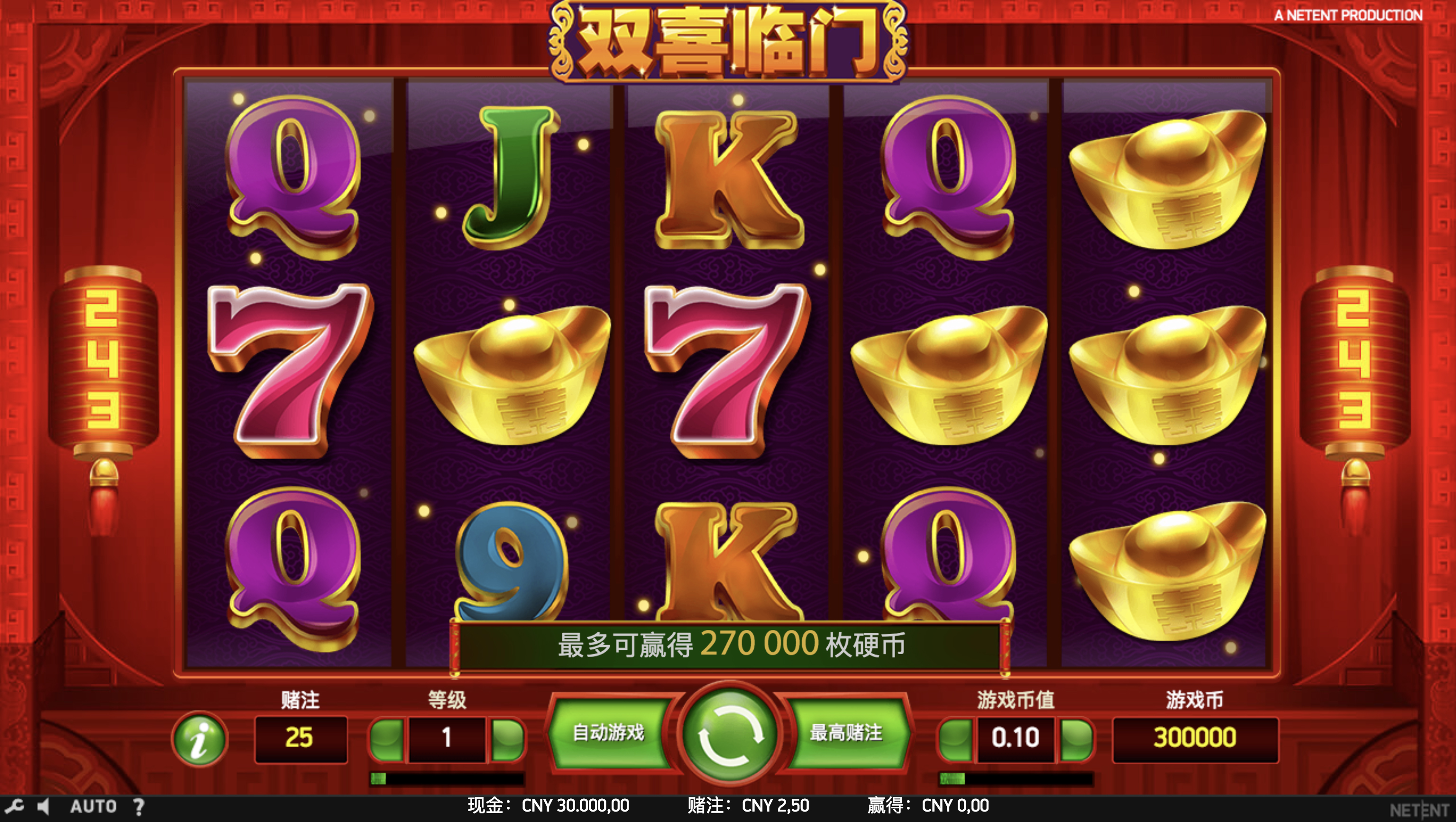 As with the game upon which Twin Happiness is based, the design here is nothing out of the ordinary. That’s not to say it is poorly executed or amateurish, more simple yet perfunctory – much like the game itself. The gameboard sits in front of a red curtain, framed by (presumably) a red window frame with Asian detailing. Either side of the gameboard hang red Chinese lanterns with the numbers 2, 4, and 3 illuminated vertically down the length of the lamps (243, of course, being the number of ways to pay the slot offers). The reels are purple with more Asian detailing, and they twinkle with animated spots of light around the symbols. A typical Chinese instrumental accompanies play.

Low-value symbols are the standard playing card values 9-A. High-value symbols are peaches, lanterns, bars (on a red scroll), red 7s and gold ingots.  Ingots are the highest paying symbols, with 5 across a pay line awarding 40x the bet size. The game has a wild symbol which appears on reels 2-5 but there is no scatter symbol.

As already mentioned, the Twin Happiness slot machine has no scatter triggered bonus rounds (pretty difficult without a scatter symbol), but it does have a feature which is executed on every spin, the “Twin Reel” mechanic. On every spin at least two adjacent reels will spin in harmony or ‘link’ and reveal identical symbols. This is not to say every symbol is identical, but that the three symbols on one reel are replicated on the twin reel. The twin reels can be any two adjacent reels and are chosen randomly on each spin. Furthermore, the linked reels are not limited to just two, this is just the minimum for each spin. Two, three, four, or even all five reels are capable of linking on the same spin. The more linked reels, the more winning combinations are likely.

Twin Happiness is about as simple as a slot you’ll find, in terms of both design gameplay. There’s nothing too challenging going on here. Yet if its inspiration, Twin Spin, is anything to go by, nothing’s going to stop this slot being a smash. If NetEnt knows anything it’s how to make a simple slot with no bonus round and a moderately low maximum win a smash hit (Starburst anyone?).

In all honesty, this isn’t the kind of slot I would personally choose to play, I like something with a little more potential or at least narrative. However, I have to admit that there is something strangely moreish about it. Like a bar of dairy milk chocolate, you know there are more elaborate, exotic, and challenging candy bars out there but more often than not you just want the chocolate. Twin Happiness is neither elaborate or challenging, and for a lot of folks out there, that’s just the way they’re going to like it.