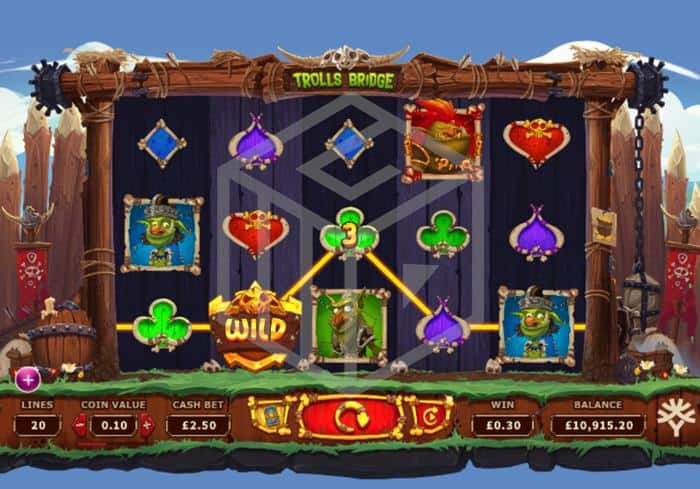 As we’ve come to expect from Yggdrasil, the design work on Trolls Bridge is first class. The scene is set in the opening animation it pans back from a fantastical castle along a winding pathway and back across Trolls Bridge before the bridge is levered upright to form the game board with a tied-together timber frame and a sharpened log fence either side to stop intruders gaining access to the castle in the distance. The ominous soundtrack adds to the feeling of trepidation one might feel upon encountering such an enticing yet scary scene.

The low-value symbols are coloured card suits (blue diamonds, green clubs, purple spades, and red spades with a small skull and crossbones at the top), while the four higher value symbols are different cartoon trolls on coloured backgrounds (again blue, green, purple, and red), with the red troll the most valuable. 5 on a pay line of the red troll are worth 12.5x the bet size. The wild resembles a wooden shield with a WILD sign nailed across the front, and the scatter symbol is a golden skull and crossbones with FREE SPINS across the base. The two other symbols you will encounter in the base game are the Bonus Pot (a cauldron of bubbling green nastiness), and the Bonus Stone (a large rock surrounded by flames).

Trolls Bridge is not short of special features. Both the Bonus Pot and the Bonus stone are activated randomly in the base game while the free spin bonus round is activated by landing 3 or more free spin scatters. Finally, there is something called the ‘Golden Bet’ which you can opt to activate at a cost before you spin. 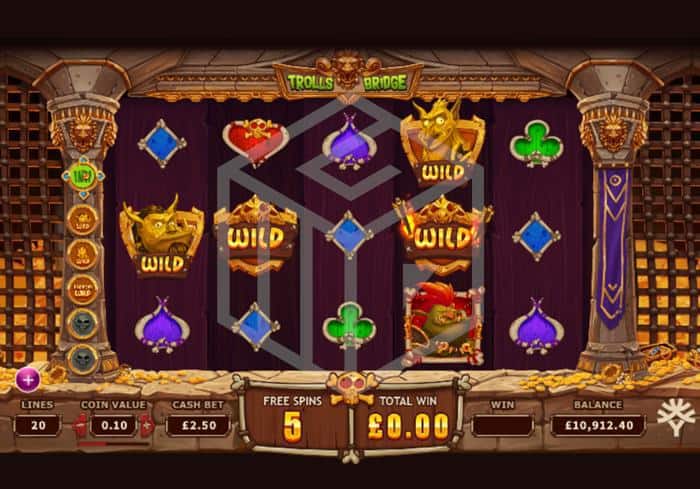 Landing 3 free spin scatters awards 6 free spins + 3 feature picks, landing 4 awards 8 spins + 4 features, and 5 awards 10 spins + 5 features. Although you can’t retrigger the free spins you do get an opportunity to win some more during the feature picks round.

Before the spins commence you are taken over the drawbridge to the castle to select your feature picks from 18 face-down feature cards. Picks include extra free spins, random wilds, sticky wilds, troll symbols becoming wild, super-stacked symbols, or a 2x multiplier on all wins. The plethora of wilds can really enable the wins to stack up during the free spins round.

The Bonus Pot symbol only appears on the 5th reel in the base game and when it does it activates a bonus which rewards you with either a cash prize of between 40-1000 coins (equates to up to 50x bet size) or a number of free spins and feature picks. 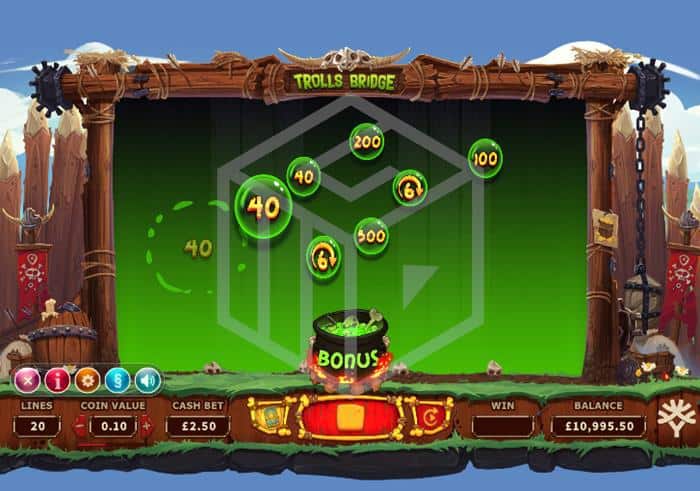 Another base game symbol, the Bonus Stone can appear randomly on any reel and when triggered it rewards a player differently depending on whether or not the symbol has landed on a winning spin or a losing spin. On winning spins it will award up to a 5x multiplier for that win, while on losing spins it pays between 100-1000 coins (equates to 5x – 50x the bet size).

Pay an additional 5 coins (25% of your initial bet size) prior to a spin and if you activate free spins you will be awarded an additional feature pick. Also, the RTP of that game will increase from 96% to 96.3%. Although we have seen other reviews recommending this as an option due to the potential bigger wins it may bring, we’re not so sure the investment is a worthwhile one considering the % likelihood of any single spin activating free spins. Only one for the true gamblers I suspect.

Our Thoughts on Trolls Bridge

Another winner from Yggdrasil, Trolls Bridge combines great graphics and animation with a fitting soundtrack as well as providing plenty of features both in the base game and in the bonus round. The base game wins aren’t exactly life-changing but the prevalence of wilds throughout mean that a win is never too far away. It’s also pleasing that you’re not reliant on just the scatter symbols to enter the free spin round as they can prove difficult to land, and getting to the spins and picks via the Bonus Pot is always a thrill.

Overall we spent a happy couple of hours spinning the reels on Trolls Bridge, an ideal medium variance slot experience with a fun theme, great design, and innovative features.