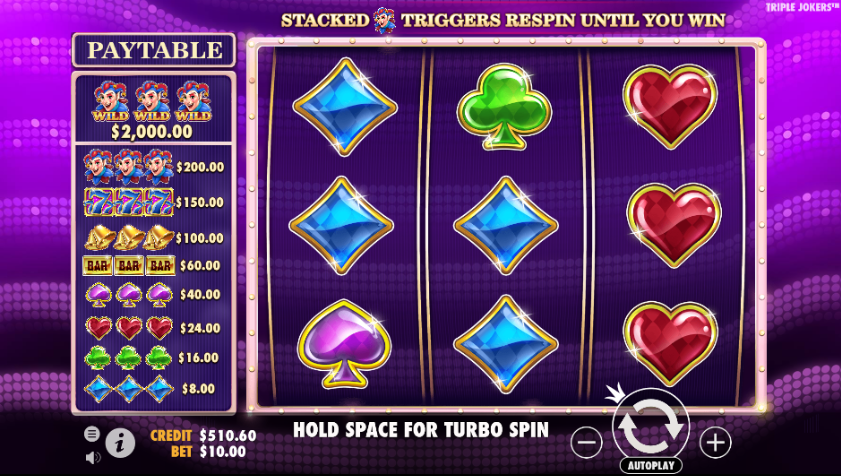 Released in July 2019 by Pragmatic Play, Triple Jokers is about as old school a video slot as you’re likely to see. It’s a no-frills, highly volatile, 3 reel Las Vegas-style fruity. This is the type of slot which will be appreciated by the purists, and probably largely ignored by the more recent batch of fun-seeking online slot fans.

Most of a player’s biggest wins are likely to come from the game’s single feature, the ‘Respin Until You Win’ feature which turns stacked Jokers into sticky wilds.

As previously mentioned, this is a no-frills slot, and that goes for the design as well as the mechanics. It is meant to resemble a Las Vegas casino style 3x3 fruity, and that it does. It has a curved, transparent reel set adorned with traditional fruit machine symbols. To the left of the reel set is the full paytable. Both the reel set and the paytable sit on a shimmering purple background with waves of twinkling lights running horizontally across the screen. The soundtrack is a mildly funky disco affair – think Michael Jackson’s ‘Off the Wall’.

Respin Until You Win

Triple Joker’s sole feature is triggered by landing a full reel of jokers. Upon landing the reel of jokers become Wild Jokers and remain in place while the other two reels spin again. Respins, as the title of the feature suggests, continue until such time as a win lands. It is only during the ‘Respin Until You Win’ feature that the maximum win of 1,000x is possible as all Jokers are wild at this time.

I’ll level with you folks; I’m no fan of 3x3 slots. To me, they are too quick to take your money and don’t offer enough in the way of fun or features to keep me interested. However, I am well aware that there are those who find these kinds of games just the ticket, and frankly, I can understand why.

They know, as we all do, that the house has a few % edges, and that more often than not you’re going to walk away with slightly lighter pockets than you sat down with. But classic 3x3 fans also know that no amount of fancy gameplay, features, or distractions change the fact that a lot of spins will go by before there is a big payday – so why bother with all the fluff?

To this end, Triple Jokers ticks all the boxes. It ain't the most exciting of online slots to play, but if you’re a no-frills, high variance classic slot fan then this will more than likely float your boat.