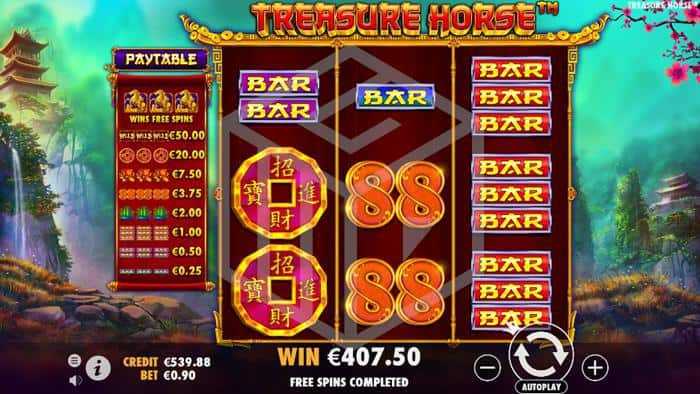 Visually Treasure Horse has a very standard Asian themed design with the expansive background showing multi-level temples high up on richly vegetated mountainsides. Waterfalls flow and cherry blossoms bloom. The game board only occupies around a third of the screen and is a fairly basic affair, appearing as a Chinese scroll. To the left, you’ll find the pay table which quite conveniently changes automatically to show the cash win if you adjust your bet size – none of this showing the win in coins nonsense.  A generic oriental pop melody chimes away throughout gameplay with noises from the forest beyond (birdsong, the sound of the waterfall, howling winds) taking over if you let the game stand idle.

As per the classic 3x3 slot theme, the low-value wins are represented by single, double, and triple bars. Following on from that we see bamboo plants, double 8’s (8 is a lucky number in China), a Chinese purse with coins, a purple and gold inscribed coin, and a wild symbol. The wild is, in fact, the highest paying symbol, worth 55.55 x the bet size. The wins tend to be odd sizes due to the unusual 18 pay lines on offer. The other symbol is the scatter which is the eponymous Treasure Horse. 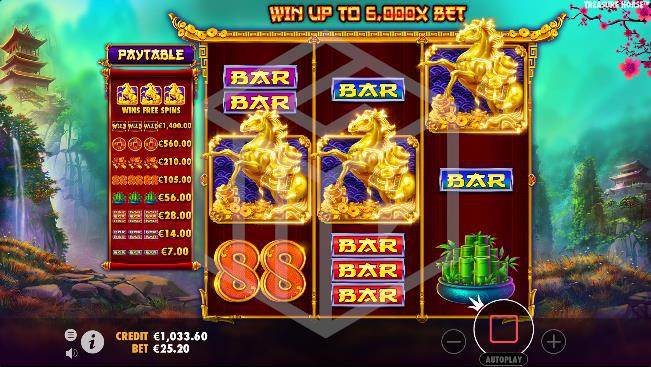 The big feature here is the Treasure Horse free spins, activated by landing 3 Treasure Horses. This will award 8 free spins, an amount which can (and more than likely will) be added to as for every subsequent Treasure Horse which lands on the reels throughout the free spins will award one additional spin. The free spins can be particularly lucrative as during the bonus round a multiplier reel appears to the right of the game board which spins in unison with the main reels, although rather than containing symbols it contains multiplier amounts between 2x and 6x. Whenever you land a win it is then multiplied by the multiplier which has landed on the multiplier reel. Hit a decent win here and you can earn some serious cash. Although you are very likely to hit multiple Treasure Horses to add more free spins during the bonus round it is worth noting that as the Horse has no other value and isn’t a wild symbol, more often than not its appearance also acts as a win blocker due to the small size of the reel set. 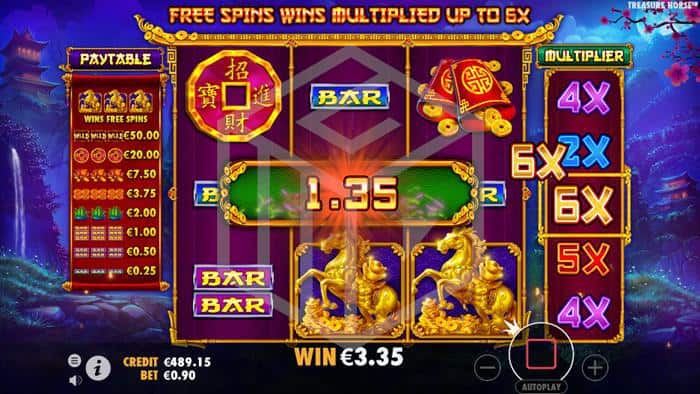 Our Thoughts on Treasure Horse

Anybody who has read a few of my reviews will probably be aware that I’m not a great fan of 3x3 slots. In general, I’m happier to embrace the future than the past and although they can be pretty popular, especially among streamers, my personal opinion is that they tend to be pretty goddam boring! Well for once I am going to step down off my soapbox as I must admit that I thoroughly enjoyed playing Treasure Horse.

Although it certainly isn’t going to win any design awards, it is made infinitely more bearable than most 3x3’s for a couple of reasons. Firstly, most games with such a small reel set tend to have 5 pay lines, 10 at a push. The fact that this game has 18 means that rather than dead spin after dead spin the tedium is relieved considerably in between bonus rounds by the increased number of base game wins. Secondly, the free spin round, while not as lucrative as some high variance bonus rounds, offers plenty of scope for additional spins as well as the multiplier reel offering some very decent win potential. All in all, it’s a very playable game and I’m glad that for once I can heartily recommend a 3x3 slot!