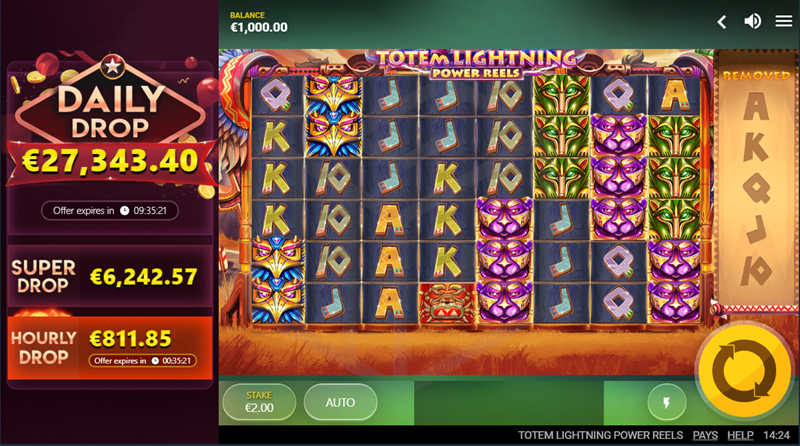 To the right-hand side of the reels, you will find a “Symbol Strike Bar” called “Removed” with slots designated to all the lower paying symbols. This is an important part of the special features in Totem Lightning Power Reels.

The reels are set in the outbacks of America’s open barren land with knee-length grass and native Indian headdresses hanging from the top corners of the reels.

To the left of the reels, you will also find the Daily Drop progressive jackpot amounts, which are continuously rising and increasing, until one lucky player wins the full amount and the balance will start over again.

Albeit lacking in the special feature symbols, Totem Lightning Lightning Reels is not lacking in regards to special features in general. Remember that “Symbol Strike Bar” bar we mentioned briefly earlier? This bar keeps track of your “Removed Symbols” progress for each spin, among other things.

To the right of the reels, you will notice the ‘Removed’ panel which has A, K, Q, J, 10 and 9 carved out of it. This is because, whenever you have a winning combination which is made up of lower paying symbols, they will be completely removed from the reel set.

In addition, new symbols will fall down taking their place, effectively granting a re-spin. The next lower paying symbol win will also disappear, giving you another re-spin.

If you manage to collect all lower paying symbols from the reels, you will be in a really good place indeed. At this stage of the game, you have the highest possible winning potential.

Look out for a sudden outburst of lightning which can strike at any time on the reels or on the symbol strike bar.

Depending on the area the lightning strikes, the effects will vary.

If the lightning hits the reels it has the ability to clone the symbols. Any symbols which made up the winning combination will disappear, making space for new ones to fall down to fill the gap.

If the lightning hits the Symbol Strike Bar you will remove all linked symbols.

Yet again we find a Red Tiger title with a huge winning potential in the “base game”. We love the fact that all the action happens here, and that we don't find tonnes of random symbols triggering the features in the game.

That said, I hit a 10 or 15x win during my demo play today and the game presented a huge animation congratulating me with a “Big Win”.  I would highly recommend that Red tiger show "Big Win" on a bit higher multiplier.

Finally, the pay-line setup in this game was a bit hard to grasp with all these disappearing symbols. Although all lower paying symbols disappear from the reels if you win, the only symbols that actually pay are those who fall on a paying line.