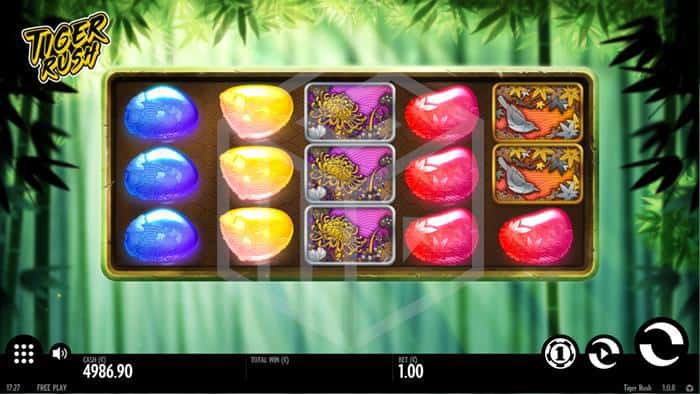 The design of Tiger Rush, is, for the most part, fairly pedestrian. Sure, the background of a dense Indian jungle scene dappled by sunlight making its way through the canopy is decent enough, but the game board and the symbols are largely uninspiring, to say the least. First, off the game board, itself appears a little squashed in the middle resembling an iPhone in portrait mode. Secondly, the symbols themselves (with the exception of the Tiger itself) are very basic and uninspiring, mainly comprising of some jellybean-shaped colored jewels. Things improve a little in the free spin round when the background turns blood-red, the middle reels expand, and the expanding tiger wilds play a more integral role and reveal their full majesty but on the whole, this is a very dated looking slot for late 2018.

The Tiger Wild expands to cover the entire reel upon landing in both the base game and the free spin round. 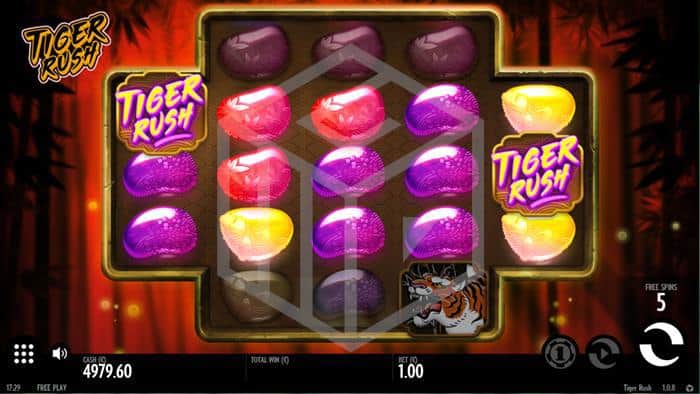 5 Free spins are triggered by either landing 2 scatters or by landing 1 scatter and a wild on adjacent reels. When the spins are triggered the middle three reels expand from 3 to 5 reels opening up extra ‘pay both ways’ winning lines. Any scatters landed during the free spin round will earn the player a further 5 free spins.

Our Thoughts on Tiger Rush

My first impressions didn’t leave me particularly impressed with Tiger Rush. The design and graphics seemed woefully out of date, there is a distinct lack of noteworthy features, and the wins aren’t exactly breathtaking, even in the free spin round. However, for reasons which I’m still trying to exactly figure out, I found myself quite enjoying playing it?

I suspect in part it’s because although I'm loathed to admit it I can be quite partial to a low variance slot where I can enjoy hundreds of spins, bring in plenty of (albeit low value) wins, and get into the main feature on a regular basis – and with symbols stacked throughout and the Starburst-like ‘pays both ways’ format the low value wins come in thick and fast.

Tiger Rush is never going to be a game-changer, but some people don’t necessarily need change to have a good time, and if you’re one of those then there are certainly worse ways to spend a few hundred spins. It’s also a great slot if you have to work off a deposit bonus – you may never win too big but you’re never likely to lose much either.