Thor's Lightning by Red Tiger is a 7-reel & 7-row online slot with winning cluster cluster pay and a 96.08% RTP. Playable on all devices from €0.20 to €40 per spin, Thor's Lightning is a high volatility game with a max win capped at 1800x your stake. 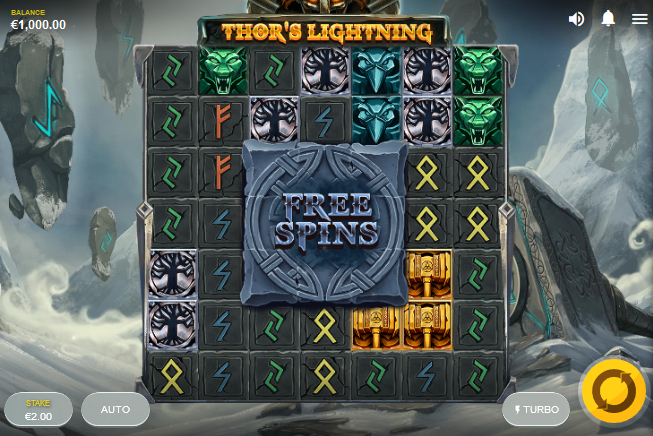 There’s no denying that this is a good looking slot. The grey block play grid is set in the midst of a harsh looking snow-filled mountain range. Howling winds whistle in the background. Thor’s epic hammer can be seen partially buried in the snow behind the gameboard and rocks containing runes hang in the air while the snow rains down. The middle square of the gameboard (a 3x3 block) is taken up by the Free Spins centrepiece while different value symbols cover the rest of the board.

Blue, green, orange, and yellow runes make up the low value symbols. The higher value symbols are stone carvings of a bird, a jaguar, a Yggdrasil, and Thor’s Hammer. The hammer is the highest value symbol worth 25x the stake for landing 40 symbols.

There is no shortage of features to enjoy playing Thor’s Lightning. As well as the cluster pays mechanic, the base game brings with it two random features, Thor’s Lightning and Thor’s Hammer. There are also two different free spin bonus rounds; Valhalla Free Spins and Muspell Free Spins.

Cluster wins of 5 or more symbols will explode after landing to be replaced by symbols from above. If a new win is formed then the cycle will be repeated until no further wins land.

Both of Thor’s Base Game Features appear randomly after a losing spin and feature a large animated Thor appearing centre screen to wreak havoc with the reels.

Thor fires bolts of lightning which may remove low paying symbols or matching symbols (including wilds) may be added.

When Thor swings his mighty hammer 2x2 cluster of symbols may be replaces with premium symbols or random nudges can result in winning combos.

All regular symbols are removed from the grid and instead gold coins continually fall through the 7 reels. Some coins will stick to the grid and at the end of the free spins all remaining coins are awarded a multiplier value. The multiplier figures are added together and multiplier by the original spin stake for your final win.

All low value symbols are removed and the full 7x7 grid is filled with high value symbols only. Two game enhancers may occur during Muspell spins to increase your chances of winning:

Our thoughts on Thor’s Lightning

Thor’s Lightning is a cracking slot with plenty to offer. The design is first class with some superb artwork and animations. It also has plenty to keep you entertained while you grind away for that big win with decent base game and bonus features. The max win is set at 1,800x the stake which isn’t massive but is still well worth aiming for. What this slot lacks in top-end potential, however, it more than makes up for in sheer entertainment value.