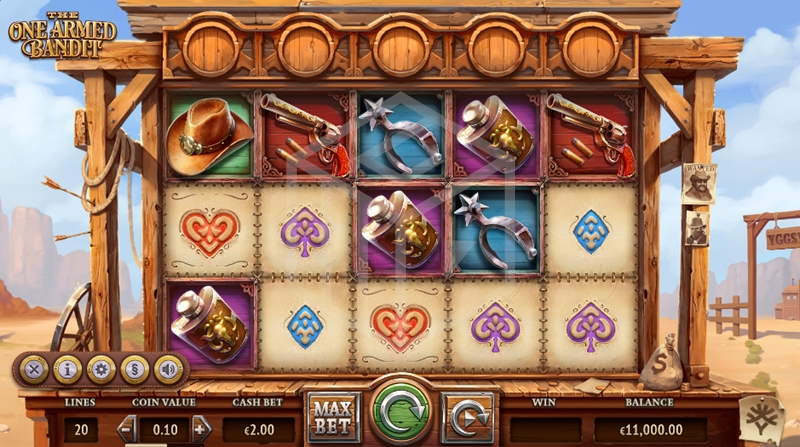 It’s always a joy to check out the design of the latest Yggdrasil game because they are just so damn good at it. Once again the art team delivers with a dusty frontier setting. Rocky outcrops are partially visible in the background as clouds float past. A couple of wood-framed buildings can be seen in the distance, but other than that and the town’s wooden entrance sign, the only distraction from the blistered desert floor is the gameboard which sits front and centre.

The wooden stage and crossbeams, along with the length of rope and the numerous ‘Wanted’ posters of outlaws would suggest that the gameboard is in fact a set of gallows. The reels are designed to resemble patches of sewn together canvas or leather. On the wooden beam above each of the five reels are circular spaces set in the wood which come into play during the game’s special features. The soundtrack is pretty special also, with plenty of good old country instrumentation from twangy guitars to mouth organ, fiddles, horns, and percussion.

The low-value symbols are the card suits, diamonds, clubs, spades, and hearts. The high-value symbols are represented by silver spurs, a cowboy hat, a hip flask, and a revolver. The highest paying symbol is the revolver which pays 80x the stake for 5 across a payline. The scatter symbol is a desperado and the wild symbol is a Sheriff’s badge. There are also cowboy bonus symbols which come into play during the free spins bonus round.

Special Features in The One Armed Bandit 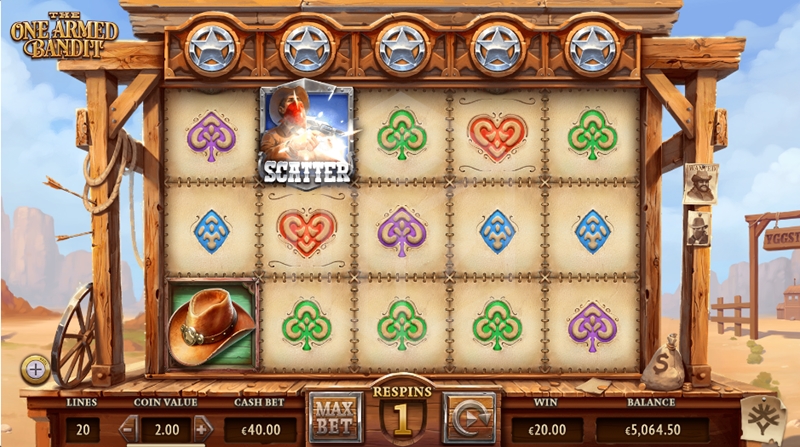 The scatter symbols trigger special features in the base game as well as ultimately activating the free spins round. The wild symbol is also a special feature as when they appear they contain big win multipliers. 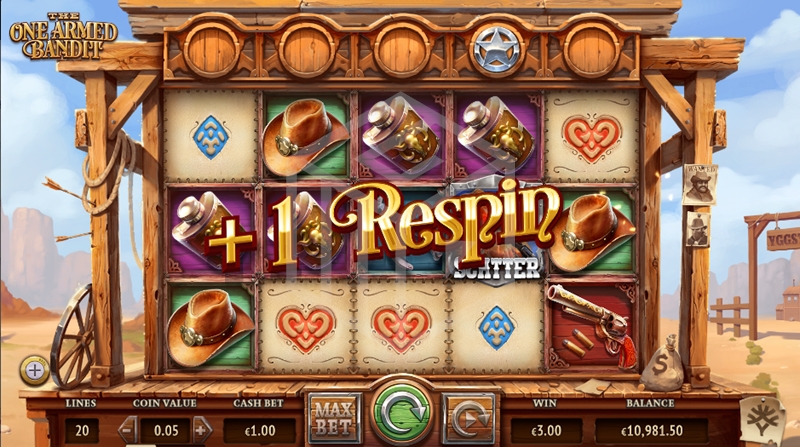 A scatter symbol on any reel triggers a respin. Not only that, but the scatter transforms into a 5x wild multiplier for the respin. A further scatter landing during the respin awards another respin and another reel with a 5x wild multiplier. Respins continue for as long as new scatters land on the board. Each time a scatter lands a marker is placed on the circular space above the reel; according to the story behind the game, each collected desperado scatter represents the Sheriff apprehending an outlaw. 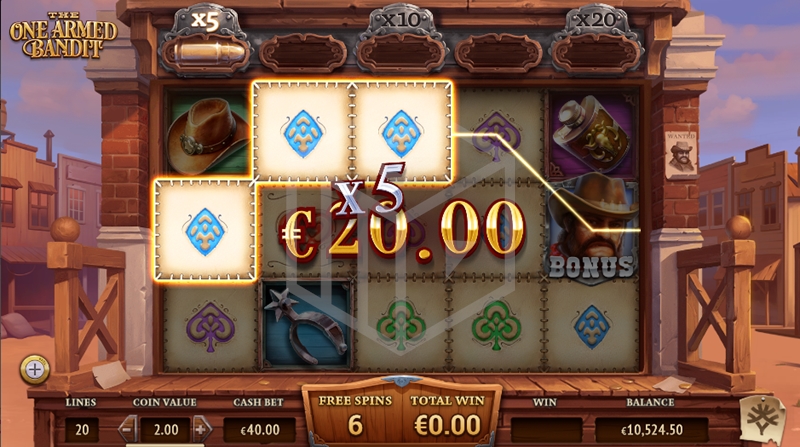 Land a scatter on every reel and you will activate 10 free spins – or as the story goes the “Sheriff versus Outlaw Free Spin showdown”. Free spins can also trigger during Scatter Respins if a scatter lands on all five reels during the course of respins. If any respins are still remaining when the free spins are triggered they will be added to the free spins. Free Spins have a base x5 multiplier and wilds on all reels. Bonus symbols appear on all reels during free spins. Land 2 bonus symbols and the multiplier increase to 10x, a further 2 symbol maxes-out the multiplier at 20x. Wins can be multiplied by up to 100x if a maxed-out 20x multiplier combines with a 5x wild multiplier.

Our Thoughts on The One Armed Bandit

Yggdrasil has come up trumps with One-Armed Bandit. The design, theme, and narrative are compelling while the game itself is simple to follow but with enough going on to keep your attention during the lean times; and believe me, there will be plenty of lean times. This is a highly volatile slot and as such, you can expect to rattle through a lot of spins in order to reach a pay-off. It’s that pay-off, however, which will keep you coming back. With up to 11,800x the maximum stake a possibility, this is a slot where you really can win life-changing money.