Play Temple of Treasure Megaways on

Temple of Treasure uses a fairly standard design for both a Temple slot and a Megaways slot. As tends to be the case in an Aztec temple slot the Temple is set in the jungle. Likewise, as is the norm, the game board sits between two carved stone pillars, obscuring the entrance to the temple.

As with Megaways slots such as Diamond Mine, Bonanza, and Extra Chilli the top row only comprises 4 reels while all those below have 6. In this instance, all the symbols sit on blocks of sandstone. Tribal chanting and distant booming drum beats make up the soundtrack to Blueprint’s latest slot.

The low-value symbols are the standard 9-A followed by a necklace, snake bracelet, brooch, and an Aztec mask. Six of a kind pay from 1x stake to 50x stake for the highest value symbol, the Aztec mask. The wild substitutes for every symbol except the scatter, and the scatter is represented by a temple illuminated by the moonlight.

How To Play The Temple of Treasure Megaways

From cascading wins to mystery symbols and temple free spins, these are the special features you'd like to know before taking the game for a spin.

Temple of Treasure benefits from cascading reels, mystery symbols, and a free spin round with multiple options and unlimited wilds. The game also has an option to buy straight into the bonus round.

Whenever a win lands the symbols which make up that win will disappear, temporarily leaving black spaces in the reels before new symbols cascade down from above to fill the empty spaces. Cascading symbols may trigger another win, causing more winning symbols to disappear. Cascading reels will continue until no new wins are made. 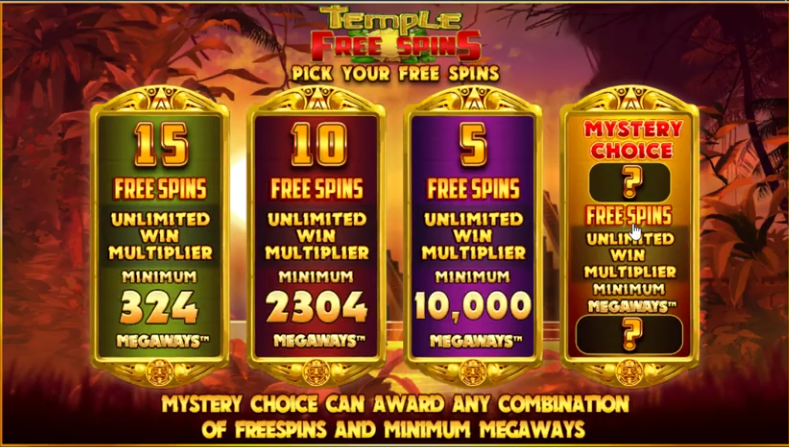 Freespins are awarded if you land 4 scatters during a spin. Once triggered you will be sent to another screen to choose the volatility of your bonus round from the following four options;

Cascading reels also occur during free spins with the added advantage of increasing the win multiplier with every win. Even when a cascade run ends the multiplier earned remains and increases with each new win.

Free spins can be retriggered by landing 3 or 4 scatters on the top row with 3 scatters awarding 5 extra spins and 4 granting 10.

For players who can’t wait to get into the free spins round, there is a ‘Bonus Bet’ button which will take you straight into the feature round. However, it does come at a hefty cost of 100x the bet size.

Temple of Treasures is another quality release from Blueprint although it has to be said that much of what is on offer has been seen many times before in other Megaways releases. That being said, the introduction of guaranteed Megaways during the bonus round is a nice new additional feature. Its little tweaks and innovations like this which keep Megaways games fresh and Blueprint are very adept at finding them.

As ever this Megaways incarnation provides spectacular potential, an exciting free spin round, and plenty of lovely volatility!