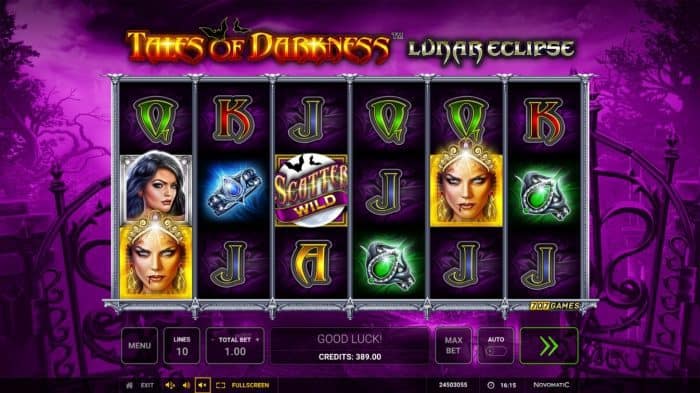 The scary designed background fits so well to this game with a nice purple colour. Non-Premium symbols (9, 10, J, Q, K, A) can remind you from the summer/autumn/winter/spring queen slot series, as they look same, but are still a bit different. In premium symbols, we have two rings which pay the same amounts, a silver lady, and finally a gold lady, which is the best symbol of the game. Music is ’scary’ as in every tales of Darkness games, but we would still keep the sounds on, as it sounds good! The scatter symbol in Lunar Eclipse is a Moon symbol, which doubles as a wild symbol in the game as well. The symbol is easy to spot, as the words “scatter” and “wild” covers the moon in this game.

In this game, we have only one special feature, namely the Lunar Eclipse feature in addition to the normal gamble feature. This is triggered by the scatter symbol, which also doubles as a Wild both during free spins and the base game. 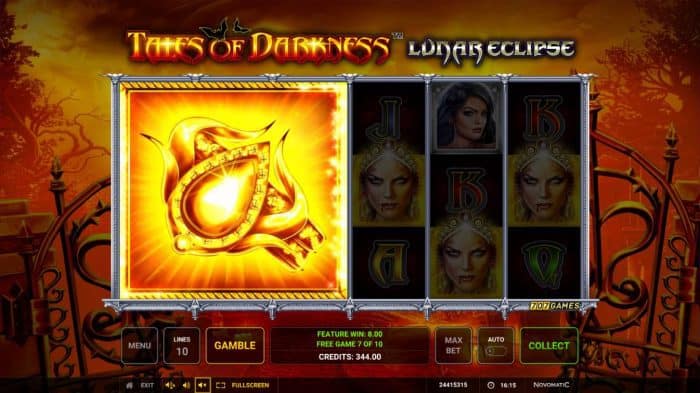 Our thoughts on Lunar Eclipse

We think that Lunar Eclipse has the most potential and is the best game in the Tales of Darkness series. We really like the bonus game, as we haven't seen a feature like that from GreenTube before. We’re looking forward to more similar releases from the provider. , It is great that every new Novomatic release is different than before! The game looks great, it wagers well, and the bonus shouldn't be too hard to hit. We totally recommend this new novomatic release.