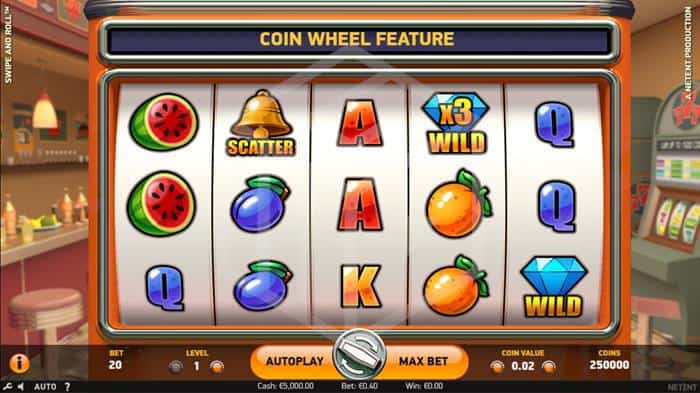 As this is a retro-themed game the design and symbols are nothing to write home about and are necessarily fairly basic. The soundtrack of ’50s and ‘60’s rock ‘n’ roll is nicely themed appropriate, and the symbols are a suitably old school on regular white reels. The frame of the game board is reminiscent of a retro jukebox, set within a typical 1950’s café/bar with neon strip lighting, red leather topped chrome bar stools, dartboard and a row of slots against the wall. There are only 6 regular symbols; the three low-value symbols are the Q, K, and A and the higher value symbols are the plum, orange, and the watermelon. There are 2 blue diamond wilds, one is regular and appears on all 5 reels while the other comes with a 3x multiplier and only appears on reels 2, 3 and 4, meaning that hit the right combo and you could make a 27x win. The scatter symbol is a bell – hit three to enter the bonus round. 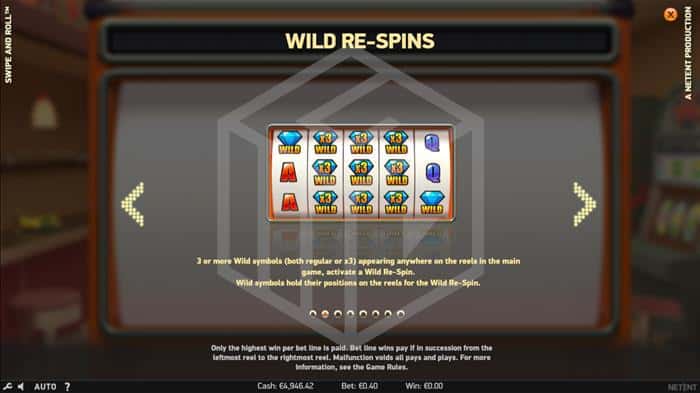 The special features are where you’re going to make your money on Swipe & Roll. There are a couple of base game features with wild re-spins and the randomly triggered Coin Wheel feature as well as a potentially huge money-spinning bonus round activated by the scatter symbols.

If three or more wilds (regular or 3x) appear anywhere on the reels then all wilds become sticky for an additional spin.

This feature is triggered randomly whereby the game board transforms into one large central reel which will spin to award either a coin win, an arrow which will expand the win zone, or a scatter symbol which will send you straight into the main bonus round. If you win less than 5x your bet then the wheel will re-spin until at least that amount is won.

The main bonus game in Swipe & Roll is triggered by landing either 3 bell scatters in the base game, or hitting a scatter symbol during the Coin Wheel feature. When activated the game board once again transforms into a 3 x 3 reel slot and the symbols are replaced by coin values and arrows. You get to spin (or swipe) the reels one by one from left to right and will initially win the coin value landed on the centre row. Hit an arrow rather than a coin value, however, and you’ll expand the winning area to all the symbols on that reel, and you might even raise the height of the reel to five symbols if subsequent arrows come into play once the winning area has been expanded. After swiping all three reels you will win the total of all coin values you have illuminated on the board.

Our Thoughts on Swipe & Roll

At first, I wasn’t especially enamoured by the prospect of playing Swipe & Roll, a high volatility slot with only 6 old school symbols with some very basic graphics and animation. However, as NetEnt seem to do better than most providers, they have an uncanny ability to take a seemingly simple premise and turn it into a strangely addictive game. It’s true that base game wins are unlikely to come thick and fast and that you’re really playing this game for the features. It’s also true that those features aren’t the most interactive or elaborate in terms of player engagement. Despite this, however, they do offer potentially huge wins and they come just about regularly enough to keep the excitement levels up. I really enjoyed Swipe & Roll, and yet all things considered I can’t exactly put my finger on why? Mind you, NetEnt managed to turn Starburst, a game with no bonus features to speak of into the most popular slot around, so I’m not entirely surprised that I’m hooked!