The design is extremely ‘Mario-esque’ for want of a better description. The floating reels packed with cuboid fruit and letters give way to something which would not look in the least bit out of place in a Marioworld type game from the early 2000’s – a lush meadow full of trees with green cubed tree-tops and cubed bushes and plants, while overhead fluffy marshmallow looking cubed clouds float past high above the meadow and the gently flowing river at its edge. The tranquil background music, meanwhile, comes straight from a relaxation CD. 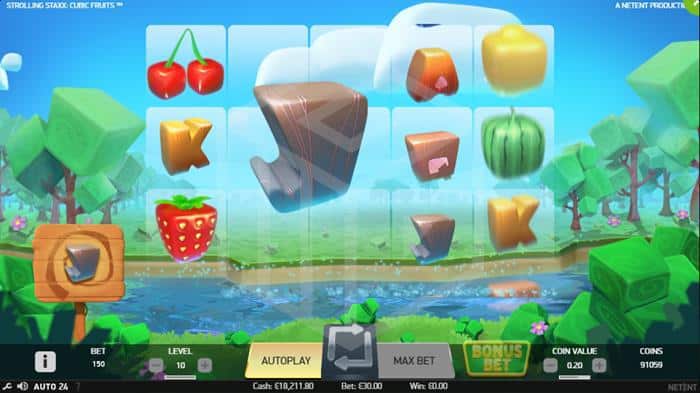 As alluded to a little earlier, the symbols consist of cuboid letters and cuboid wooden fruits. The low-value symbols are the standard royals J-A, while the higher value symbols are represented by cherries, lemons, strawberries, and melons. The wild is a 3D golden W. The melon and wild are the highest value symbols, both paying 50x the stake for 5 on a pay line (unless you are playing with Bonus Bet activated, but again, more of this later). All symbols can appear either as single symbols or as colossal symbols covering 2x3 or 3x3 spaces.

The special features in this game are the Strolling Staxx themselves, and also the Bonus Bet feature which enables the possibility of the Extra Chance feature. 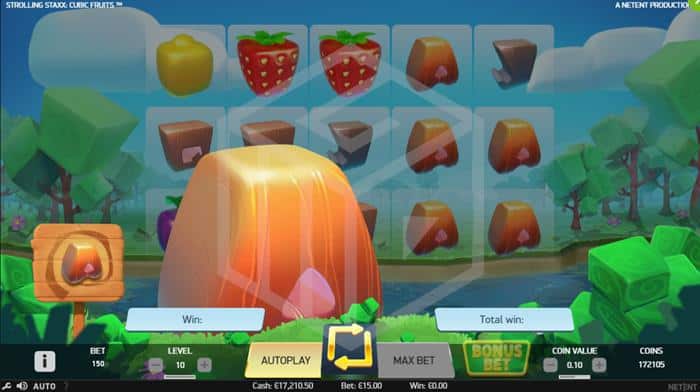 Strolling Staxx Respins If one or more reel is fully covered with the same symbol then the Strolling Staxx Respins are activated. The triggering stack doesn’t need to form part of a win, it can occur anywhere on the reels as long as one full feel is covered. Respins will then start whereby all stacks and connected symbols will move one reel to the left on each spin, while the remainder of the symbols spin. The respins will continue until the final stack (if indeed there is more than one) has left the game board. If during the respins further stacks of the same symbol appear on the reels then the respins will continue until that stack or any further stacks have disappeared from the left reel. Hit the high paying symbols hard and you can potentially walk away from this feature with a win of 5000x your stake. Bonus Bet & Extra Chance 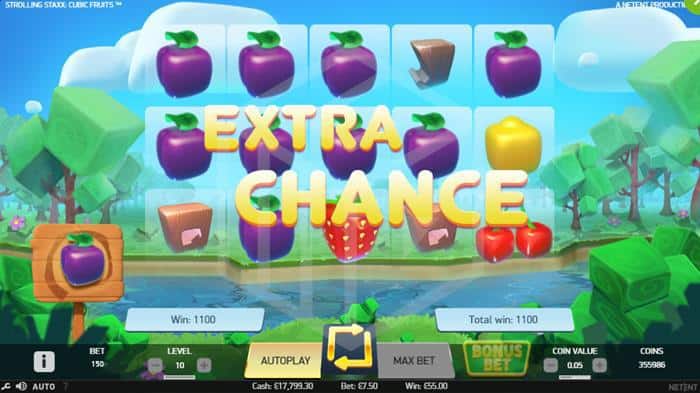 If you choose to activate the Bonus Bet then your price per spin will increase by 50% while the line wins remain the same. Paying that additional levy will mean that the Extra Chance can be activated. The Extra Chance is activated every time you trigger the Strolling Staxx respins without landing a 3x3 symbol. During the Extra Chance, a 3x3 symbol matching the one which has triggered the respins will appear raining down over the static reels and can stop either partially or fully on the reels replacing what was previously underneath, therefore giving you more matching symbols and more chances to win when the respins start.

Our Thoughts on Strolling Staxx

Strolling Staxx is easily my favourite of the Staxx series. The design may not exactly be cutting edge but it’s a lot of fun to look at and a lot of fun to play. I’m a big rolling reels fan anyway, especially ones that come stacked with potential like these ones. Unlike Neon or Butterfly Staxx where a seemingly huge number of stacked symbols can leave you with a quite disappointing win, get stacked reels here and the wins are very nice indeed. Of course, that’s all down to the difference in the number of winning lines available, but I find it so much more satisfying this way. It’s not quite a high volatility slot but it can generate that kind of excitement when you hit the feature hard. Considering it is such a simple game with only the one real feature I was quietly impressed with my time at the reels of Strolling Staxx.