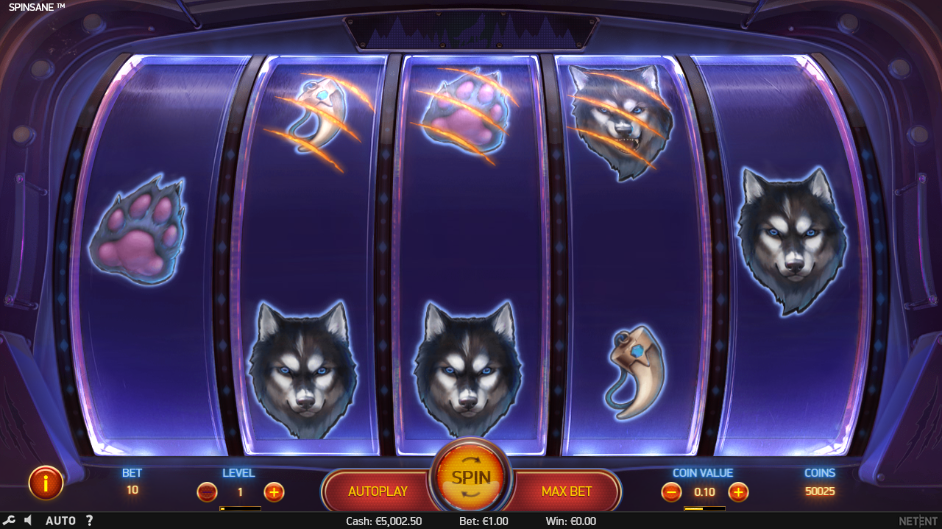 The Spinsane slot released by the Swedish game developer giant, NetEnt, in June 2019 comes with great potential for big wins! It’s a medium/high variance slot machine played on a 5x3 gameboard with 27 pay lines. We can’t be sure of the theme, but there are wolves and wolf claws and paws sporadically covering the reels (although we’re not sure why), so let’s say it has a wolf theme, shall we?

With an RTP of 96.26%, you can play Spinsane from as little as €0.10 up to €500 per spin. You can win up to 5,000x the stake possible from a spin. Super symbols (the same as the regular symbols but on some serious steroids), and free spins round are where you’re most likely to see some of that potential released.

Unusually for NetEnt the design for Spinsane isn’t anything to write home about. In fact, it’s a little confusing. The curved reel set is housed within some kind of casing, and there are rows of lights between the reels. We’re guessing this is supposed to mimic a land-based casino slot. However, as the reel set takes up the entire screen and there is no background to observe it is really hard to say. The background noise is also not especially obvious. It’s not a melody or tune, but just some background noises which vaguely sound like a casino – if it were mostly empty. The reels themselves are odd in so far as not all of the 15 available symbol spaces will contain symbols. Each spin brings in a random number of symbols per reel making the already uninspired design look depressingly sparse.

The low-value symbols are a wolf tooth pendant, a wolf paw, and a wolf head. The high-value Super symbols the same three symbols except that they all have three fiery wolf scratches across them. The difference in value is huge – with 5 of a kind for all three Super Symbols worth 10x their low-value counterparts. The highest value symbol is the Super wolf head which is worth 500x the bet size for 5 on a pay line. The wild, which appears on reels 2-5, is a golden flaming ‘W’ and there is also a howling wolf scatter symbol.

The Super Symbols help out regular symbols for wins and there is also a scatter triggered free spins bonus round.

As previously noted the three Super Symbols are the ones to look out for as they award many times the value of the regular symbols. They also substitute for their regular counterparts if a winning combination is possible. For example, if two regular wolf paws are joined by 3 Super Symbols wolf paws on a payline then a 5 regular wolf paw symbol win is awarded.

You can trigger a free spins bonus round by landing 5 or more howling wolf scatters. Once triggered, 2 free spins are awarded for each scatters visible – guaranteeing you at least 10 free spins. During the bonus round, everyone scatters landed will add one extra free spin. Also, at least one reel will land as a fully stacked wild on every free spin.

Spinsane certainly has decent potential, 5000x as a maximum win is nothing to be sniffed at. However, potential aside this is an odd game, to say the least. The semi blank reels thing really didn’t do it for me, the gameplay is pretty boring, the design seems kind of lazy, and the narrative of the game is weak. NetEnt continues to provide some of the biggest and best slots on the market - unfortunately, this isn’t one of them.

If you're into wolves, and the possibility of winning big, check out Wolf Legend Megaways instead