Released just in time for summer 2016, Quickspin’s Spinions Beach Party took advantage of the seasonal weather by introducing this bright and breezy beach-based slot featuring little yellow characters which look remarkably similar to the characters from the hit family movie “Minions”. Hmm, I wonder where the inspiration for the name Spinions came from?

This is a low variance affair with a 5x3 reel set and 25 fixed pay lines. Pay off come from a sticky wild respins base game feature and a free spin round, again with sticky wilds. Spinions Beach Party comes with an RTP of 96.04% and can be played from €0.25 up to €100 per spin. 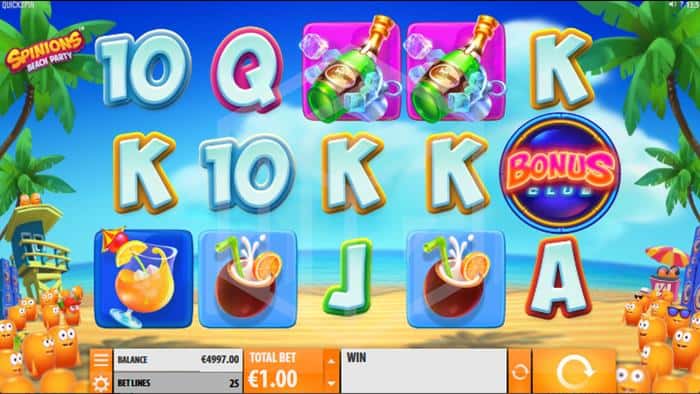 As you might expect from a slot drawing very heavy influence from a cartoon movie the design of Spinions Beach Party has a cartoon design. Also, as you’d expect from the name of the game the setting is a beach with palm trees swaying gently in the breeze while little yellow minions dotted across the beach, some sporting sunglasses or hats, bob along to tunes pumped out of the speaker stacks on either side of the transparent game board. Blue skies above and a clear, calm, aquamarine ocean are visible in the distance. Party music accompanies the spin of the reels.

The low-value symbols are the standard 10, J, Q, K, and A while the higher value symbols are represented by different beach party fruity cocktails; namely a drink in a hollowed out coconut, one in a pineapple, a watermelon drink, an orange drink, and finally a bottle of champagne in a bucket of ice which is the highest value regular symbol paying 8x the bet size for 5 on a pay line. The wild is a Spinion on a red background and is the overall highest paying symbol with 5 on a pay line rewarding 20x the bet size. The scatter is a blue badge with ‘BONUS CLUB’ in neon letters emblazoned across it. The scatters only appear in the base game and only on reels 1, 3, 5.

Spinions Beach Party benefits from a base game feature the sticky wild respin, and a free spin round again with sticky wilds.

If two or more wilds land on a single spin then the Spinions Sticky Wild Respins are triggered. Respins will continue until no new Spinion Wilds appear. 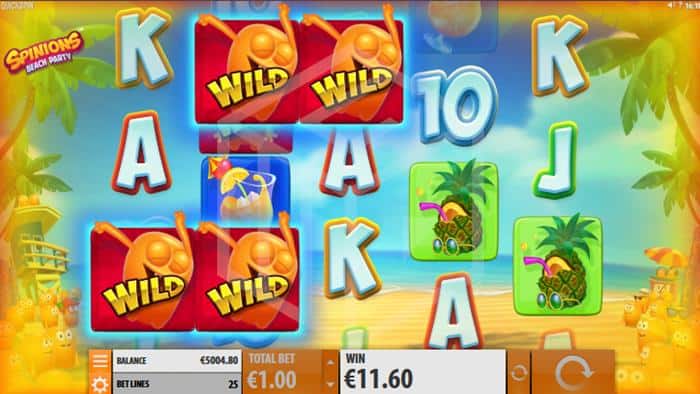 Land 3 scatters and you’ll be awarded 10 free spins with Sticky Wilds. This time the wilds will remain sticky throughout the entire round.

Our Thoughts on Spinions

Spinion Beach Party is a bright, colourful, fun-looking game with a couple of very basic features. The base game respins can prove quite profitable if you get a decent run landing wilds which I did on several occasions. The free spins, however, didn’t yield an awful lot most of the time and even the bigger wins on this game are not exactly awe-inspiring with the highest possible single spin win is just 500x.

I’m guessing this slot is designed purely to attract recreational players as its pretty low variance meaning regular but low wins across the board. Often times keeping it simple can be a smart move, but when the game has so little potential in the first place then perhaps adding a few more features to keep the punters interested might have been a good idea. Even the possibility of retriggering the free spins would have been helpful, but no, 10 is your lot!

No serious player is going to play Spinions Beach Party, certainly not for very long anyway. Probably OK for a very recreational player or someone working off a deposit bonus but it just didn’t do it for me I’m afraid.