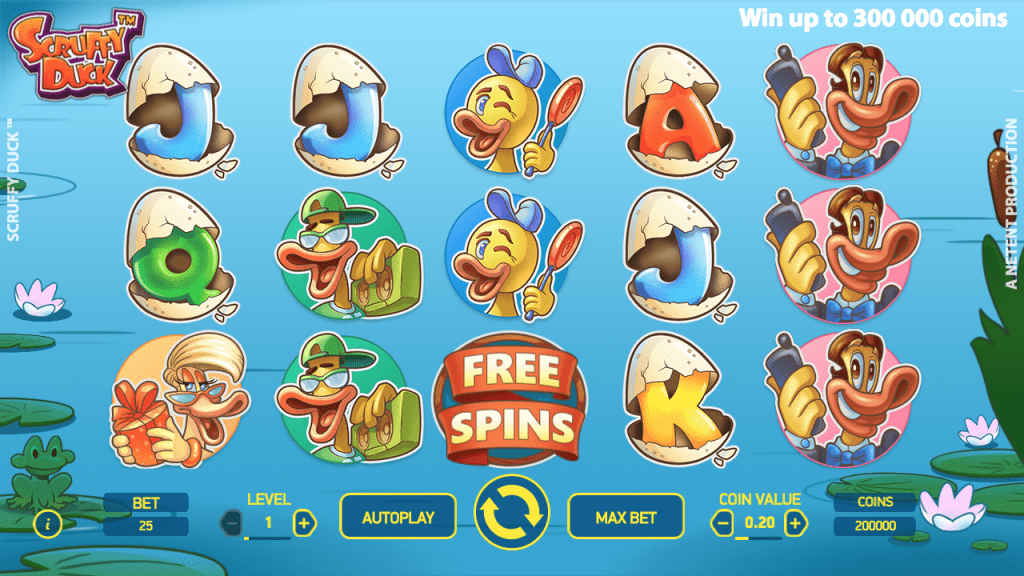 Step into the pond where the ugly duckling and his fellow siblings were supposedly hatched to play the slot game scruffy duck. The high-value symbols on the reels are all theme related and feature members of a duck family. J-A make up the lower values. The scatter symbol has the words “Free Spins” written on it, and it can only land on reels three, four and five. The wild symbol shows a little yellow duckling wearing glasses and it can substitute for all other symbols except the scatter. The wild is an expanding symbol that pops up both during the base game and free spins mode. It expands to cover an entire reel to complete a winning combination. There are also a number of other wilds which only appear during the free spins. As for the music, think of a trumpet tune that goes from a lower pitch to a higher pitch. It is not the best slot background music out there, but it fits right into the fairytale theme of Scruffy Duck.

When it comes to special features in Scruffy Duck, there is only one free spins round available; however, this comes with a bonus game that you get to pick!

The free spins feature is triggered by landing three scatter symbols on reels three, four and five. When triggered, the feature will allow the player to pick from the diving ducks to reveal one of the following free spin modes.

We did like the bonus game aspect of the free spins round; however, we only got to it once and managed to get the multiplier feature. Make sure to record your spins and post them on our forum so all of you can see the other bonus games. We’re particularly curious to see the double feature since you could allegedly win 1200x there! For negatives, many of us will most probably find the symbols, background music and the slot game in general, a bit childish to play.