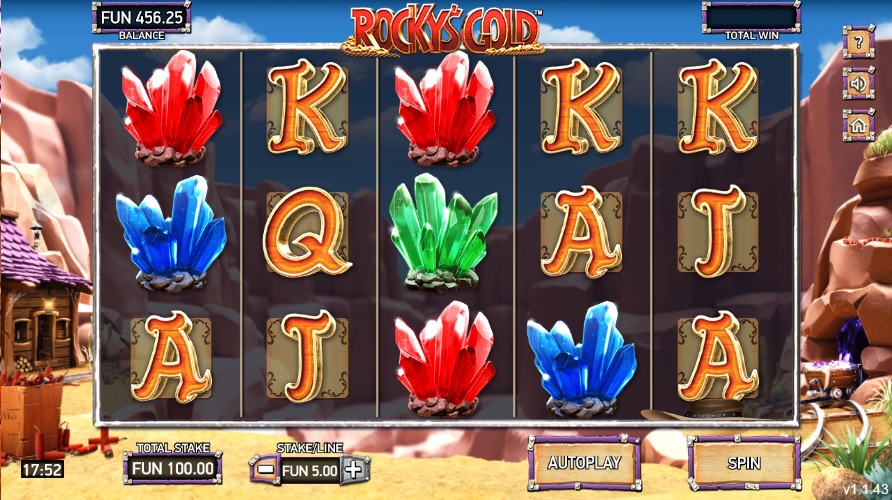 Rocky's Gold has clearly drawn its inspiration from the golden age of, well, the gold rush. Your goal here is to pull out all of the gold, crystals, minerals and anything else of any value from the mine and turn all of them into coins. Of course, you will get plenty of help from Rocky himself who can be seen by the reel set from time to time.

The royals can, as usual, be spotted on the reels as the symbols of lower value. If the J or Q symbols land in place, you will get 5, 25 or 100x times the bet per line. The K and A will get you 10, 50 or 150x your bet. As well as J, Q, K and A you will see three different clusters of crystal shards. These are shown as red, green and blue with the green having the lowest value paying 200x and the red having the highest at 300x your bet and the blue giving you 250x. Finally, we have Rocky's Gold logo which is worth 500x your stake for 5 of a kind.

The TNT Bonus that has been made up of two symbols, a crate of dynamite and a detonator can appear on reels 3 and 4. When they land right next to each other, then the TNT bonus will be triggered. You will get to see Rocky yet again during the Wold Bonus where he throws three different types of dynamite on the reels to turn symbols into wilds. One dynamite will turn one symbol wild while multiple dynamite turns several symbols wild, the big dynamite cluster will turn a whole section on the reels wild. Finally, there is the Pay Dirt Bonus where the amount of scatter symbols will determine how many free spins you get in the Pay Dirt Bonus round that is activated.

There are quite a few special features for you to explore in Rocky's Gold, even though we wish they would be triggered slightly more often than they did in our experience. There is a wild bonus feature, a pay dirt bonus feature giving you both free spins, sticky wilds and multipliers as well as the TNT bonus round where Rocky blows himself up.

When you see a box of explosives land on the reels next to the detonator, Rocky will appear next to the reels and will pick one of the royals. This will turn all of the same royal symbols into a higher value crystal or the RG logo. He will continue doing this with another lower value symbol up until he ends up blowing both himself as well as the TNT up.

This feature will be triggered randomly after a losing spin. When this happens, Rocky will step out onto the screen and start throwing lit dynamite sticks around. One stick of dynamite will be able to replace one symbol with a wild while several dynamite sticks will, of course, replace multiple symbols. The big dynamite will end up blowing up the place and will in return make an entire block of symbols wild. 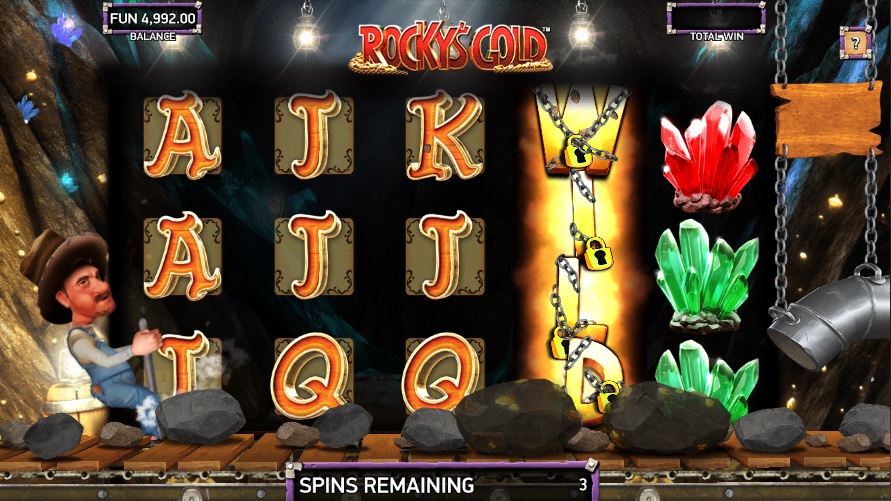 Should you land 2 bonus symbols on the reels you will get a second chance at the «Pick Me» bonus. Here you will either receive a cash prize or an entry into the free spins game. If you instead land 3 or more, then the free spins will be triggered where 3 symbols give you 10 spins, 4 gives you 15 spins and 5 gives you a total of 20 spins.

During these free spin rounds, you will be given more «Pick Me» options that can result in even better and bigger wins. Multipliers will increase the value of every win while the Wilds will turn entire reels wild. You will also see Lock modifiers that have the ability to lock the wild reels in place or take the Multiplier into the next spin.

Our Thoughts on Rocky's Gold

Upon loading Rocky's Gold we certainly got a good feeling about the game, with the scrolling effect leading into the game all done quite well. However, once we started out in the game itself, spinning the reels we quickly started noticing things that didn't impress us too much.

Several elements are simply poorly executed, while the features sound great, they haven't been made as good as they could have been. All this leaves us feeling that the slot is both old fashioned and amateurish. However, the TNT feature with the two symbols working together as well as the Pay Dirt bonus feature are two things that make the slot worthwhile.