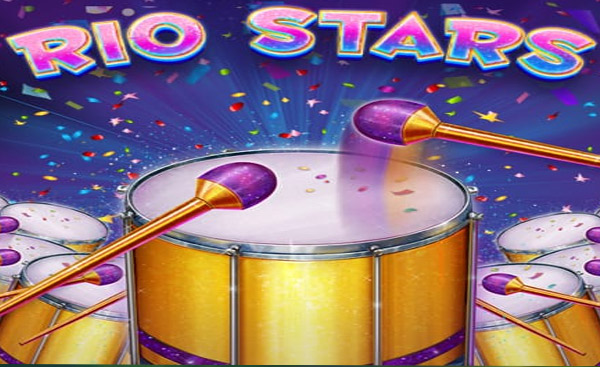 Red Tiger has certainly gone all out and made sure to fill this slot with all of the festive atmospheres as they possibly could. With great visuals, effects and fun features Rio Stars will in all likeliness draw you right in. In the background, you will see feathers and swirling patterns swaying away to the music, almost as though the whole reel set was set upon one of the floats found in the carnival parade. The music in the slot suits the theme perfectly and helps create the carnival atmosphere.

The symbols of the game have been split up in low paying generic card suits and high paying symbols designed accordingly to the theme of the slot. The card suit symbols ranging from 10 to A have a simple design, but have gotten fitting bright colours to suit the theme. Other symbols on the reels include cocktails, parrots, maracas and bowls filled with fruit. Out of these, the parrot is the most valuable where five of a kind will give you 15x your stake.

The wild symbol of the game shows off a samba dancer, of course, surrounded by feathers. She will be able to substitute all other symbols that are mentioned above as well as give you 20x your stake for five of a kind.

This game has several different features which include Carnival Reels, Rio Win Multiplier, a free spins bonus game, 3x3 Mega Wilds, Rio Dancer Wilds. However, it will always be the beating drums that show up in front of the reels you should be hoping to see as they will be the ones to trigger any of these features.

When the drums start going, a multiplier of up to x20 will be added to the game. Along with the multiplier, you will get a couple of fun features. First of all, this multiplier will apply to the next win and not the next spin as in most cases. This means that players will be holding on to the multiplier until a winning combination is created on the reels, meaning you will be guaranteed a boosted win.

The drums can also trigger another multiplier which will be added to the first one should you already have a multiplier activated.

When this feature is triggered, you will see feather fans come swooping over the reels of the game. While doing so, they will be adding a random amount of wild symbols to the reels before the spins continue.

In this feature, you will be seeing a Mega Wild, which simply is a wild symbol that is larger than usual. Taking up 3x3 spaces on the reels it will appear on the reel set to be able to boost your chances of winning.

Here, all of the low paying symbols on the reels will be removed. Which will leave you with only the symbols of higher value?

When this happens you will be awarded a random number of spins all while the Carnival Drums appear during each free spin. This means that you will be able to have your low-value symbols removed from the reels, get the 3x3 Mega Wilds, Extra Wilds and multipliers up to x20.

Our Thoughts on Rio Stars

Starting off on the visual side of the game, Red Tiger has done a great job in creating a lively and colourful carnival atmosphere in Rio Stars. There is lots going on, both in terms of graphics and music but also regarding the different features in the game which seem to be triggered on a regular basis.

However, with other slots out there with a similar theme, we can&#39;t help but compare who has one a better job. Rio Stars is without a doubt the more flashy one, but when it comes to payouts they are slightly disappointing. With a low RTP of 95.73% along with high volatility, there are definitely better options out there. However, those who are simply after an entertaining slot with plenty of features to keep you entertained, then this will certainly tick those boxes.