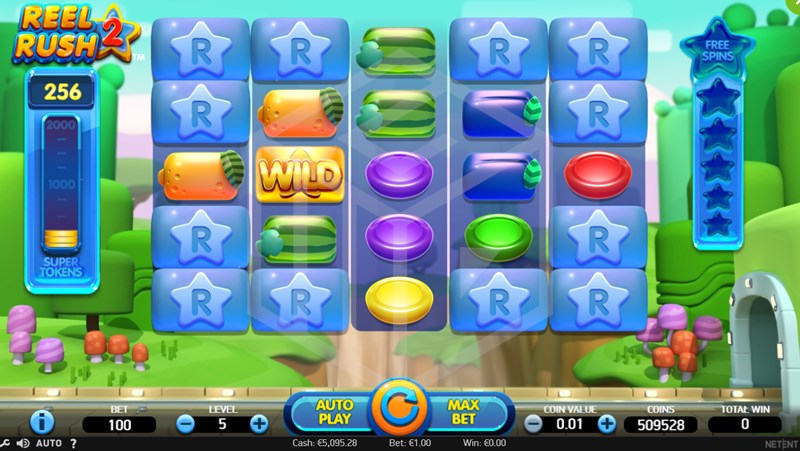 Reel Rush 2 takes place in Mario-esque video game world of blue skies, square treetops, oblong hills and mountains, overgrown toadstools and a smorgasbord of colours. The gameboard has transparent blue reels with colourful round and square fruits and pastilles as symbols.

When not in play certain areas of the board are blocked off with shiny blue transparent blocks, each showing a star with an ‘R’ in the centre. To the left of the board is a ‘Super Tokens’ meter, and to the right of the board is a free spins meter. Beneath the board to the right, you can see a tunnel entrance. During each spin a flatbed train appears from the tunnel formed of three parts, each of which may contain one of the game’s 8 random features.

The wild substitutions are golden blocks containing the word ‘WILD’ and it appears on reels 2-5 in both the base and bonus games. There are also a host of other symbols representing the many random features which we’ll look at in more depth below.

Anyone who has ever played the original will be familiar with this part of the game, but for the uninitiated, read on. As already described, a fresh spin begins with a 1-3-5-3-1 set-up of active symbols across the five reels. Winning combinations result in several of the blue blocks exploding to reveal extra symbols and prompts a respin.

Further wins result in more blocks exploding and more symbols. With each successive win the ways-to-win increase up to a maximum of 3,125 for a full 5x5 grid after the 5th successive win. A winning combo on the 5th respin automatically triggers the free spins bonus round

During every spin, the train appearing from the tunnel stops under the reels with three carriages. Any, all, or none of the carriages may contain 1 of 8 random feature symbols. Hence up to three random features per spin may take effect to modify the reels after they come to rest. The symbols and features are;

For every 2 blocks unlocked the free spins meter to the right of the gameboard goes up by one star. Five stars fill the meter and triggers 8 free spins with 3,125 ways to win.

I have to admit that when I first glanced through the information on Reel Rush 2 and saw just how much there was going (tons of random features, all sorts of meters to fill, 2 different types of free spins, options to purchase or gamble tokens etcetera) I was worried this might all be a bit too much.

Happily, I’m very glad to report that this isn’t the case at all.

My initial concerns over the number of features were that they might slow the game down. As it happens they are all very quickly and smoothly applied immediately after the spin. Not only that but they each provide another element of anticipation and excitement to proceedings.

Also, the Super Spins are a great addition – with NetEnt cleverly taking one of the most popular current features in new slots (progressive win multipliers) and adding it to their existing franchise. With the opportunity to purchase tokens to upgrade the bonus round NetEnt have also built in their own version of ‘Buy a Bonus’ – albeit one you have to qualify to buy.

With an increased max win on the original from 3,800x to 5,000x, the potential here is also fantastic.

The original Reel Rush has been an enduring success with its fast-paced action building up to the crescendo offered by the free spins round. If there’s any justice, Reel Rush 2 should emulate that success and then some. What was already a fast-paced game has now been filled with rocket fuel!