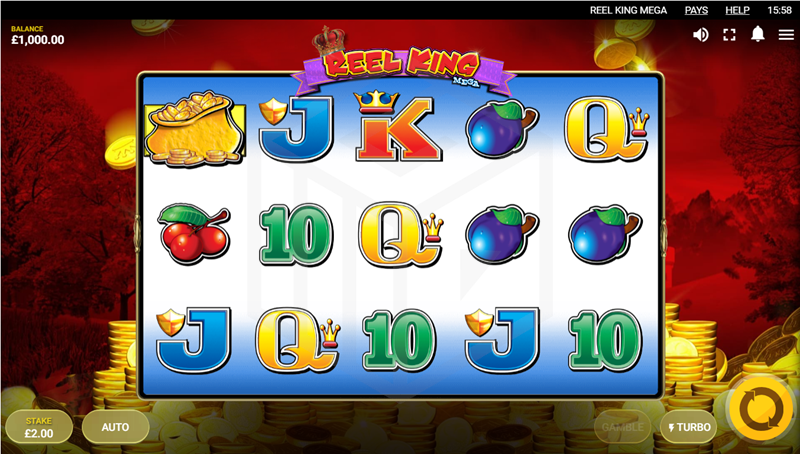 The classic fruit machine style has certainly been preserved in Reel King Mega. This new version has however gotten a little touch of Las Vegas to it. The graphics are very detailed and have gotten some vibrant colours to them. Also, Red Tiger has made sure to add several of the original iconic sound effects that are played while you spin the reels. This slot has a total of 8 symbols, which really isn't that much. Four of the symbols are of low value. They are represented by the letter «J» in a bright blue, the number «10» in green and then two of the classic fruit symbols, cherries and plums. The symbols have kept the same style as the original slot. Also, there are three symbols of higher value which are represented by a yellow «Q», an orange «K» and a golden bag filled with coins. This last symbol is the symbol that pays the most, rewarding you with x50 your stake for five on a payline. Reel King Mega also comes with a wild symbol that has the power to substitute all other symbols. This is represented by a jokers hat with the text «Wild» across it.

In this slot, you will find both special symbols such as the wild symbol that can replace all the other symbols on the reels as well as special features. The main feature of the game is Reel King where you can get multipliers of up to x25 your stake. Also, the King's Crown feature where symbols can be turned into wilds. There is also a Gamble Wheel feature, perfect for those of you who might be feeling extra lucky. According to the paytable, this feature is 100% random and 100% RTP. 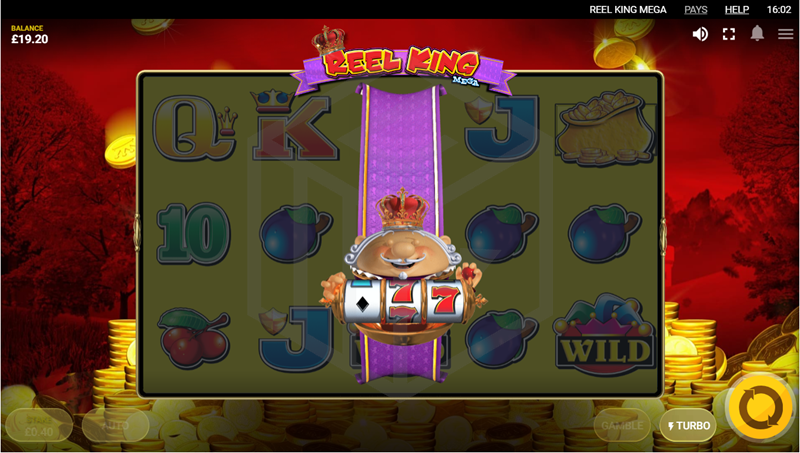 This bonus feature will be triggered when all the reels have been highlighted with a yellow background when they land. When this happens, between one and five Kings can appear on the reels. His Royal Highness will then hold his own slot machine where he will spin the reels for a guaranteed win. He will continue to do so until a losing spin takes place. Should the King get three red sevens on his reels, then you will be the winner of x25 your stake, three yellows give you 10x your stake and three blues will give you x5 your stake. In other words, this is the bonus feature that can end up scoring you some serious winnings. If you get three mixed colour sevens you will also be rewarded, this time with x2 your stake. When all the Kings have finished spinning, then the feature will end.

Each time the reels stop spinning, you will have to opportunity to activate the King's Crown bonus feature. When this feature is activated, the crown will start spinning and will bounce around on the reels. At some point, it will hit one or several random symbols. The symbols that the crown touches will then be turned into Wilds and will give you a greater chance of getting some extra wins.

Our Thoughts on Reel King Mega