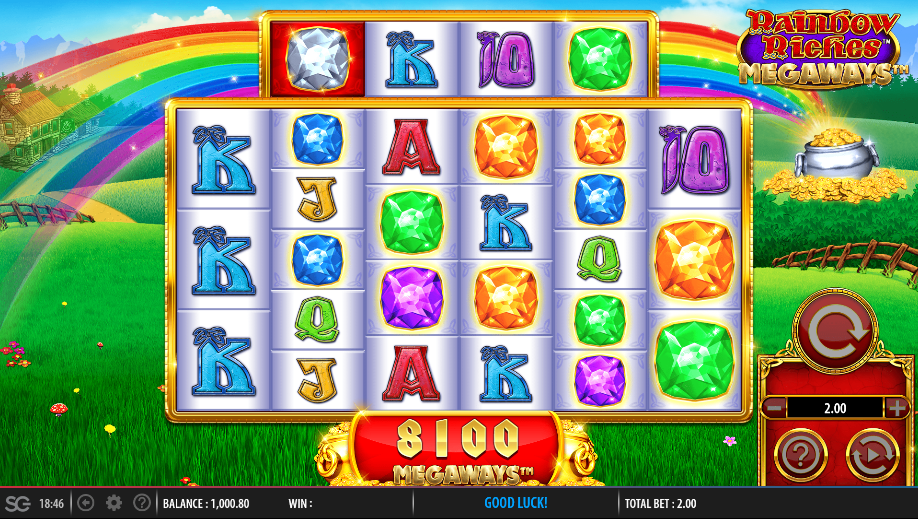 Barcrest has kept true to the original design, always a smart move when upgrading a classic slot. The cartoonish backdrop is of lush, rolling Irish fields with picket fences leading down to a forest, with mountains visible behind and blue skies above. In the distance, you can see a stone farmhouse and outbuilding to the left. To the right is a large sparkling pot of gold coins from which a rainbow is cast right across the fields. The gameboard is a gilt-edged affair and comes with the familiar Megaways™ 6 vertical reel set up with a horizontal ‘bonus’ reel with 4 symbols situated above reels 2-5. Each reel contains between 2-7 symbols on each spin offering a potential maximum of 117,649 ways to win.

Low-value symbols are the standard royals 10, J, Q, K, and A. High-value symbols are represented by different coloured gems. In order of value from lowest to highest they are blue, green, purple, orange, and diamond. Six adjacent diamonds earn 50x the stake. The wild is a lucky horseshoe and the scatter symbol is a pot of gold. There is also a multi-coloured Super Gem which only appears on the horizontal reel and also +1, +2, and +3 symbols which only appear during free spins. The gameplay is accompanied by a familiar Irish pipe led ditty.

Special features include cascading reels in both the base and bonus games, a Super Gem reel modifying feature, free spins with win multipliers, and some buy-a-bonus options.

After a win lands, the winning symbols disappear to be replaced by symbols cascading from above.  Any new win created by this process allows the cycle to repeat. This continues until no new win is created at which point a new spin will begin.

A multi-coloured Super Gem appearing on the top horizontal reel causes all gems on the board to transform into the same random gem.

4 bonus symbols in one spin trigger the free spins bonus round and award 12 free spins. Any further bonus symbols landed add 5 free spins each to the total number of spins. The cascading reels also play out during the bonus round only this time with each wins a win multiplier is added. The multiplier remains even when the cascading win streak ends. Each subsequent win adds to the win multiplier until the free spins are complete. During the bonus, round symbols marked +1, +2, and +3 may appear on the horizontal row which adds either 1, 2, or 3 free spins to the total whenever they land.

There are three ways to enter the bonus round without having to land the scatters during gameplay;

Our Thoughts on Rainbow Riches Megaways

Rainbow Riches is Barcrest most popular franchise which has already spawned half a dozen different variations, so it seemed natural that it be among the first the provider treated to a Megaways™ makeover. The look and feel are totally in keeping with the original which should delight Rainbow and Megaways fans alike.

It’s fair to say that in terms of gameplay and features, there’s not much we haven’t seen before many times. However, this doesn’t detract from it being a great game with awesome potential. In fact, there is some originality with the buy a bonus option, and the Super Gem feature is a nice innovation (if a little similar to the mystery symbol you might have come across in other Megaways incarnations).

So yeah, it’s another Megaways™ slot similar to the likes of Bonanza, Diamond Mine etc, but you can’t beat a classic M-Ways overhaul and this is bound to be a surefire hit for Barcrest.