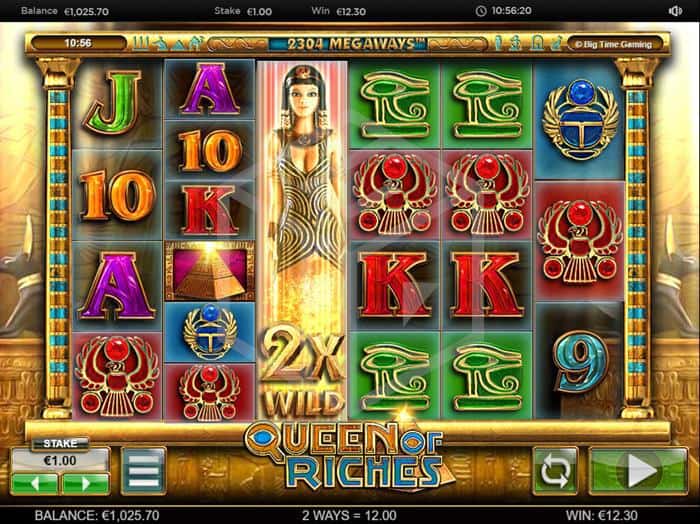 There’s not much that hasn’t been done when it comes to slot designs for the Ancient Egyptian theme so we’re not seeing much new here, although what is there is decent enough. The background is a familiar one, inside a pyramid at the entrance of a tomb with gold, hieroglyphics, pillars and murals. The game board sits centre stage framed by gold and blue pillars with Anubis (the Egyptian god of embalming and the dead which is part-man, part-jackal) guarding either side of the reels.

As per most of the early Megaways™ slots, the reel set is 6 reels wide with up between 2 and 7 rows on each reel. As per the Megaways™ mechanic the number of rows per reel changes with each spin and 3 adjacent identical symbols or more pay both from left to right and right to left.

The lower value symbols are represented by 9, 10, J, Q, K, and A while the higher value symbols comprise the usual Egyptian symbols; the Eye of Horus, the Scarab, the Eagle of Saradin and a golden pyramid. The pyramid is the highest value symbol, paying 30x the bet size for 5 in a row. The wild is a full-length image of a seductively clad Cleopatra, the Queen of Riches herself, who covers the entire reel and can count as up to 7 icons and substitute for any symbol.

There is no bonus round in Queen of Riches but the base game benefits from multiplying full reel wilds and cloned reels. 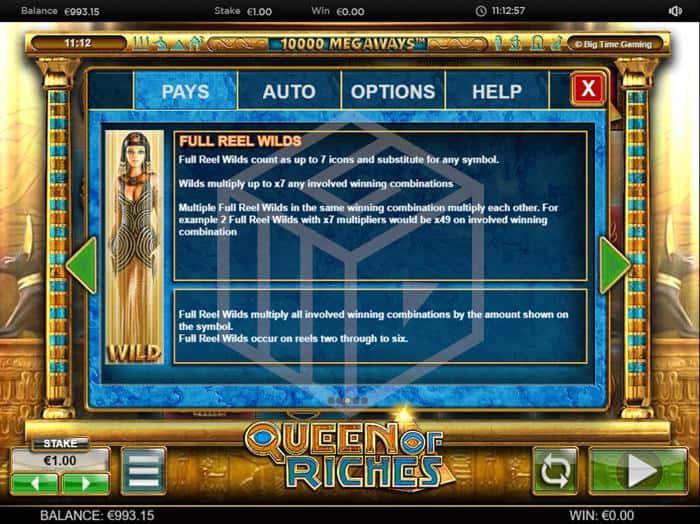 Not only does the Cleopatra wild cover the entire reel but it also multiplies up to 7x any involved winning combination. Furthermore, if more than one wild contributes to a win then the values of each are multiplied. For example, if two wilds with 7x multipliers contribute to a win then that win will be multiplied by 49. 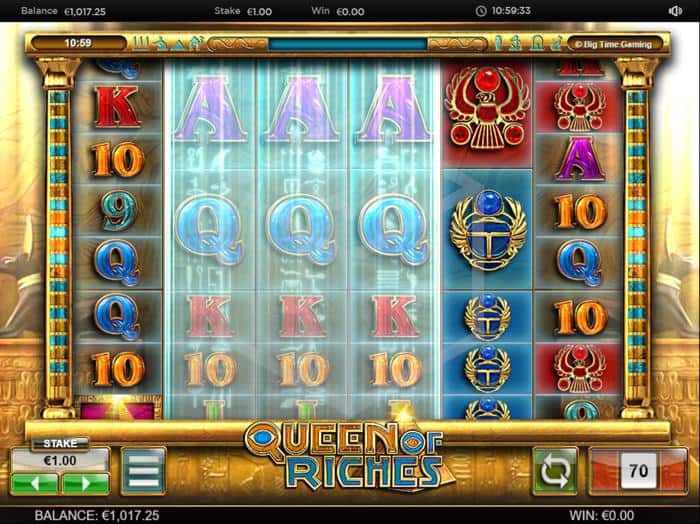 Any fans of games such as Twin Spin will be familiar with the concept of cloned reels i.e. when two or more adjacent reels are guaranteed to spin in identical reels. With every spin of Queen of Riches between 2 and 5 reels will be cloned. The cloned reels in each spin will be highlighted before they land. If you manage to land 5 cloned reels then you’re in for a big win. During our limited time testing the slot we hit 4 cloned reels on numerous occasions but never quite hit the jackpot. Nevertheless, this base game feature has great potential, especially on a Megaways™ slot

Our Thoughts on Queen of Riches

While not up to the standards of later BGT Megaways™ incarnations such as Bonanza, Extra Chilli, and Who Wants to Be a Millionaire?, Queens of Riches is nevertheless a worthy slot, and certainly better than BGT’s other Megaways™ release in 2016, Starquest.

Combining multiplying wilds with cloned reels can lead to some big wins, especially if you hit a couple of good wild multipliers. The game also comes with one of the better RTPs so you’re always guaranteed a decent amount of play if you manage your bankroll right.

Be careful, however, as there can be plenty of lean times in a high volatility slot such as Queen of Riches so be sure to play a stake which you can afford to play on for some time. It would have been nice to see Queens of Riches offer a bonus game outside of the base game, but other than that we found this slot perfectly entertaining and with enough of an opportunity to take home a big win to keep us interested for quite some time.