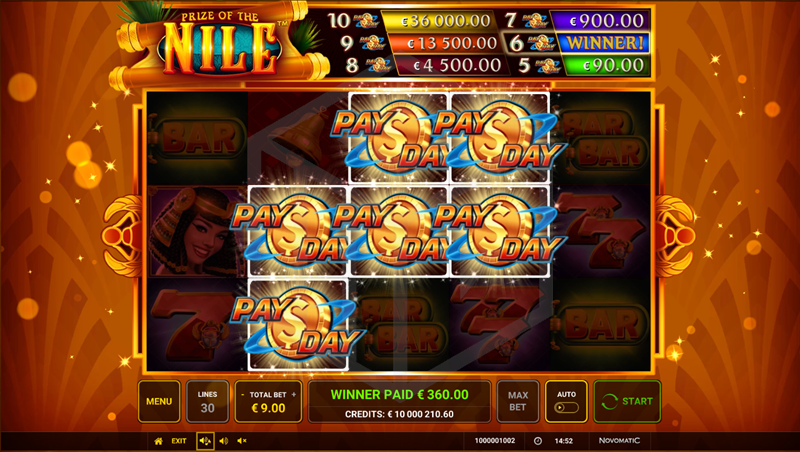 As mentioned above, you will be happy to know that there are some fun features going on in this slot. The wild symbol and the scatter symbol is part of the game, with the scatter being responsible for triggering the free spins feature. During the free spins feature, you will also get multipliers. However, the main feature of the game is the Pay Day prizes, which are the six different fixed jackpots on offer.

The wild symbol is one of the more important symbols of the slot and is represented by Cleopatra herself. Cleopatra will be able to replace all other symbols in the slot whenever it can be of help, in order to create winning combinations. It is also the symbol that will give the highest wins, should you get the reels covered in wild symbols, this could result in wins up to 2 000x your total stake during the base game and even more during the free spins feature.

During the Pyramid Bonus feature, there will also be a re-trigger feature available. This will be triggered should another 3 Golden Pyramids land on the reels again, which will result in you being rewarded with even more free spins. Yet again, you will randomly receive 10, 15 or 20 free spins. The Golden Pyramid scatter symbols can only appear on reel 2, 3 and 4.

Our Thoughts on Prize of the Nile

Prize of the Nile will certainly not top any top lists on our side and there are several reasons for this. Firstly, seeing that the theme of the slot is one that has been used over and over again, they do not get any points for originality, even though they did mix it up by using symbols from a classic fruit slot. Even though the slot does offer some pretty good payouts, it also has a low RTP and high volatility, which isn't great.

On a more positive note, there are some features going on here which make sure the slot is slightly more entertaining. With the free spins feature that can be retriggered and the Pay Day prizes that consist of a total of six different jackpots, there is actually some fun awaiting in Prize of the Nile. So if that is the most important part of a slot for you or if you maybe already liked the slot after trying it at a land-based casino, then it might be worth giving a spin or two.