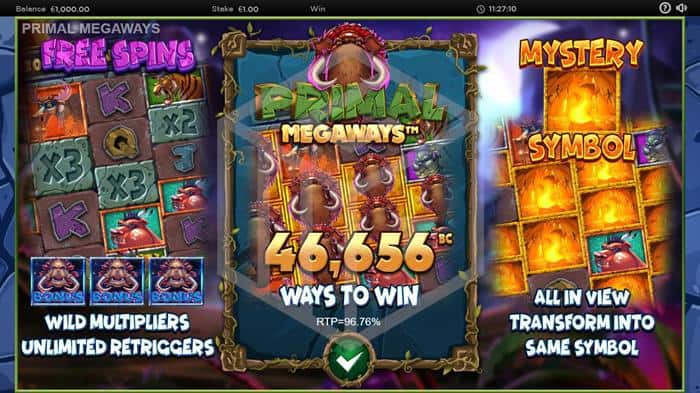 The first thing to say is that Blueprint has done a great job on the design with crisp, cartoon-like graphics and animation, bold, colourful and detailed symbols, and a visually arresting backdrop.

The game board itself sits centre screen framed by a stone border and the symbols are either square pictorial representations of prehistoric animals or card values etched in stone – making the symbols on the reels look a little like those in Gonzo’s Quest. The mean looking animals, however, offer a tad more menace than the jolly conquistador of the NetEnt slot. As with all Megaways™ slots, the number of symbols per reel varies on each spin. For Primal Megaways™ between 2-6 symbols will appear on each reel, slightly less than most slots using the Megaways™ engine, hence the reduction from 117k ways to win to a ‘mere’ 46,656! 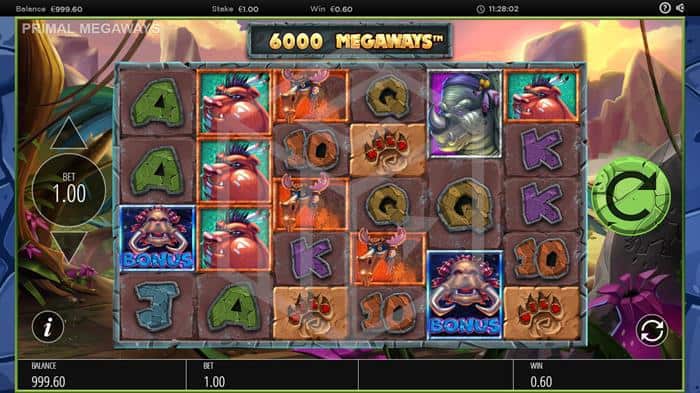 The low-value symbols take the card values 10, J, Q, K, and A, with values slowly rising with the introduction of the rather angry looking yaks, warthogs, rhinos, sabre-toothed tigers, and the woolly mammoth. Hit 6 mammoths in a row and you’re rewarded with 50x bet size, although this is way higher than the next highest paying symbol (the tiger) who only pays 5x bet size for 6 in a row. A paw print is the wild (which only appear on reels 2-6) and there is a mammoth skull bonus symbol. There is also a raging fire symbol which usually land together in abundance and which transform into any other random symbol (except for the wild or bonus) at the end of the spin.

Apart from the already mentioned fire symbol which transforms into a random symbol, the only other special feature is the Primal Megaways™ free spin round. 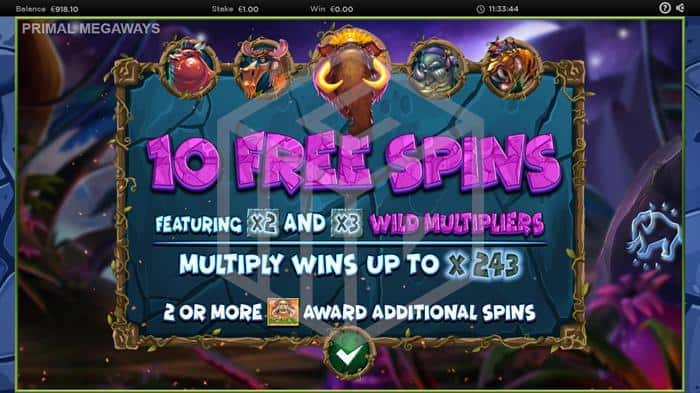 Although the Megaways™ engine is more than capable of delivering some memorable wins in the base game, it is the free spins round which all serious slot aficionados will be playing for, and as Blueprint have added a minimum win of 10x bet size (if you end free spins without earning at least this amount the respins are automatically retriggered in their entirety!) you’re sure to walk away a winner. However, you’ll be hoping for more than 10x your bet size, and thankfully there are plenty of ways to achieve that goal as during the free spin round the wild symbol will also become a win multiplier. What’s more, land more than one wild alongside an accompanying win and those wild multipliers will multiply with one another (ie: a 2x and 3x multiplier both appearing on the board will become a 6x multiplier). Hit the maximum number of possible multipliers and you could end up multiplying your win by a huge 7,776 times. The amount of free spins and multiplier values you can achieve are determined by how many of the mammoth skull bonus symbols you land to enter the bonus round (see below).

Land 3 or more free spin bonus symbols and you’ll be rewarded with the following:

If that wasn’t enough, if you land 2 or more bonus symbols during the free spin round and you will be awarded more free spins. Even better than that, there is no limit as to how many additional free spins you can earn. All in all a pretty stellar feature with massive potential. 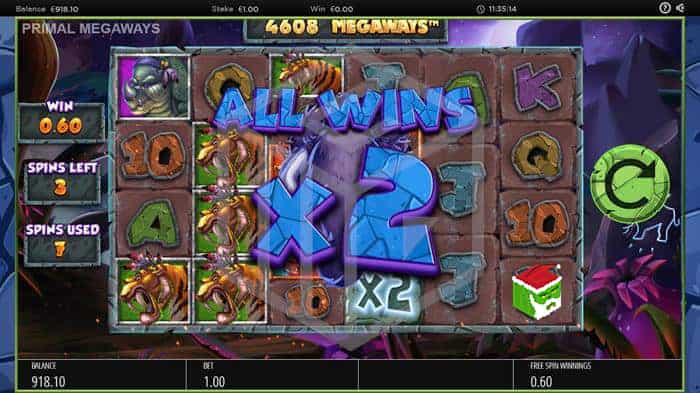 Our Thoughts on Primal Megaways™

Another Megaways™ slot, another winner as far as we’re concerned. The ‘missing’ 70,000 or so ways-to-win are largely irrelevant in this case (it’s not particularly likely that you’ll miss them to be fair, such are the odds of any spin bringing in 117k wins) and the remaining 46k or so suffice just as nicely. The theme, design and graphics are all on point. The symbols are well drawn and the accompanying music is suitably prehistoric, scary, and atmospheric. As with all Megaways™ games, there are plenty of smaller wins up for grabs in the base game, and the fire symbol is a nice extra touch which can help bring in some decent wins. However, it’s the free spins round which steals the show here. We managed to retrigger multiple spins and earn very nicely from the multiplying wilds, and it certainly made the (rather lengthy) wait to hit the scatters worthwhile. We also benefitted from the 10x bet size minimum win rule and ended up with a win well in excess of 150x bet size after the free spins retriggered on this occasion. We can certainly see Primal Megaways™ being a big hit, and deservedly so.