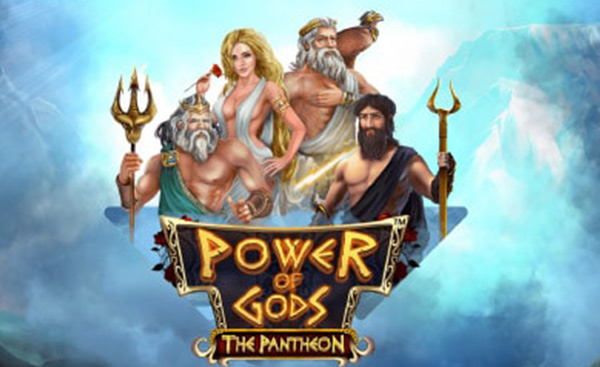 Play Power of Gods on

In this new Wazdan slot you will be meeting four of the most important gods from Ancient Greece. This is certainly not a new theme, but seemingly a theme that is usually welcomed by many. In Power of Gods: The Pantheon, you will be travelling back in time to search for the treasures of the Greek gods featured in the slot.

The reels are set up over a 5x3 grid with 20 standard paylines in total, playing from the left to the right. You will be able to adjust the coin value as well as the number of coins you wish to bet per line, making it possible to bet between 20 and 100 coins per spin. The RTP of the game is at 96.20% and when it comes to the volatility of the game, just like other games from Wazdan, you have the option to set your own level of volatility.

There are several fun features in the game, including wild symbols, scatters, Zeus spins, Kraken free spins with multipliers and moving reels as well as Aphrodite spins which involve cascading reels. The wild symbol will be the one that pays out the best prizes, with up to 2 000x your total stake possible. Power of Gods: The Pantheon is playable on both desktop, tablet and mobile.

The reel set in the game has been set up between two very fitting marble pillars, that have been decorated in golden details. On each side of these two pillars, you will see two of the gods you will get to meet in the game, Zeus and Aphrodite. The remaining two gods are Poseidon and Hades which will be appearing on each their own symbol.

One of the most important symbols in this game is the wild symbol, represented by Zeus. This will, like in most other games replace all other symbols except for the scatter who is represented by Poseidon. The wild will then be able to complete winning combinations, which must consist of 3 or more of the same symbols on adjacent reels. While the scatter can pay out wins of up to 500x your bet, the wild will give you wins of 2000x your total bet.

The two other gods of the slot also offer decent payouts. Hades will be able to pay out 1000x your bet while Aphrodite will pay up to 500x your total bet. Orpheus is the symbol of least value, being able to pay up to 250x your bet. Aside from these icon symbols, you will, as usual, find the standard card symbols with the ace paying up to 200x your bet, and the K, Q and J paying up to 50x.

You will quickly see that there are quite a few symbols and features for you to explore in this slot, the first two which we already have mentioned. Zeus, being the slots wild symbol has the capability of substituting all other symbols in the game, with an exception of other special symbols. Poseidon, being the scatter is responsible for activating the free spins round. During the free spins round, you can receive multipliers, there are also another 2 bonus symbols and several bonus spins rounds.

Should you land 3, 4 or 5 scatter symbols on the reels, you will be rewarded with 10, 15 or 20 Kraken free spins, in that order. The free spins will not be able to be re-triggered. When you get a winning combination on the reels, they will be moved one position to the right, with the final reel disappearing while a new reel will be added on the left side.

After this, you will have triggered a respin, which is a process that continues until you fail to land a win. Every time this happens, a multiplier will then be increased to x2, x3, x5 and finally x7.

You will have to get 6 of the rose symbols to get this feature triggered. When this happens, you will receive 5 free spins, where after every single spin, 8 symbols will then be removed from the reels. This will make space for 8 new symbols to drop down into place. Should you manage to get a winning combination, this process will be repeated and will continue to do so until you have a spin with no winnings. At the same time, just like the Kraken free spins round, multipliers will be increased to x2, x3, x5 and then x7.

In this feature, you will need to collect 6 of the «Lightning Bolt» symbols to be able to trigger this feature. You will be able to keep an eye on how many you have through the Zeus bonus meter. When this happens, you will get 5 free spins. With each spin in this feature, there would be a chance that up to 6 wild overlay symbols could be added to the symbols already on the reels.

Our thoughts on Power of Gods

There is no doubt about the fact that Power of Gods: The Pantheon can be a fun and entertaining slot. A big part of this is due to all the different special symbols and features that can be triggered during the game, making sure there is always something going on. However, this slot is not as complex as some of their previous releases, such as Relic Hunters. But there is still more than enough variety to make sure you remain engaged in the game.