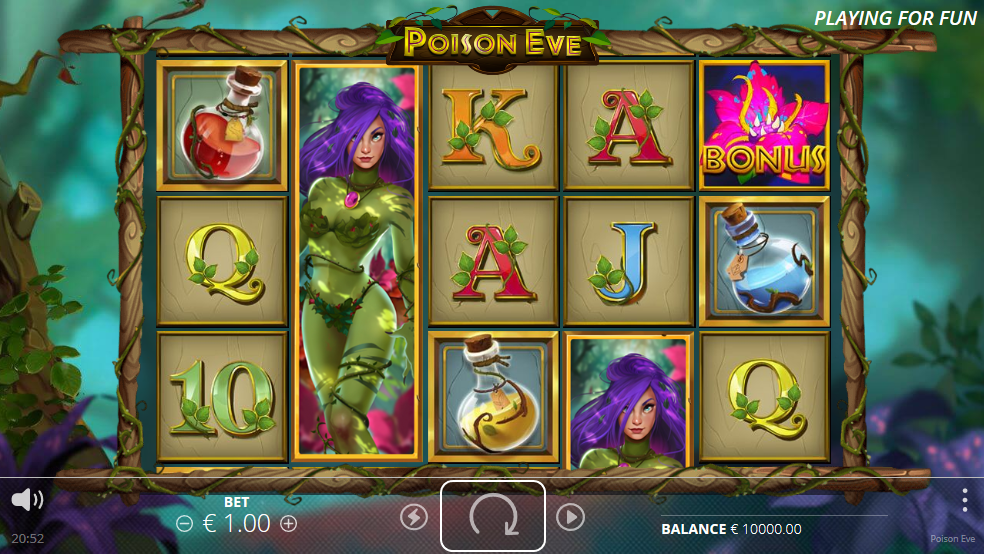 The action takes place in the heart of an enchanted forest with purple plants and craggy trees with creeping Ivy in the foreground, giving way to the spooky, misty darkness behind. Fireflies dart in all directions across the screen. The gameboard sits front and centre, a 5x3 reel set framed by wooden logs connected by twine and ivy.

Low value symbols are the standard playing card values 9-A decorated with leaves. High value symbols are green, blue, yellow, and red potion bottles. The highest value symbol is the reel length title character, the Pixie Poison Eve who is worth 100x the bet size for 5 on a payline. The wild is a vine leaf and there is also a bonus symbol (a pink flower) which only appears on the 5th reel.

The wild symbol, which only appears on reels 2-4, automatically expands to cover the entire reel when it lands.

Land Poison Eve fully on reel 1 and the Liquid Magic feature is triggered. Liquid magic turns all potion symbols into Poison Eve symbols at the end of the spin. If you’re lucky enough to fill reels 2-5 with potion bottles and/or Poison Eve symbols the reward is the maximum single spin win of 2,000x the bet size. 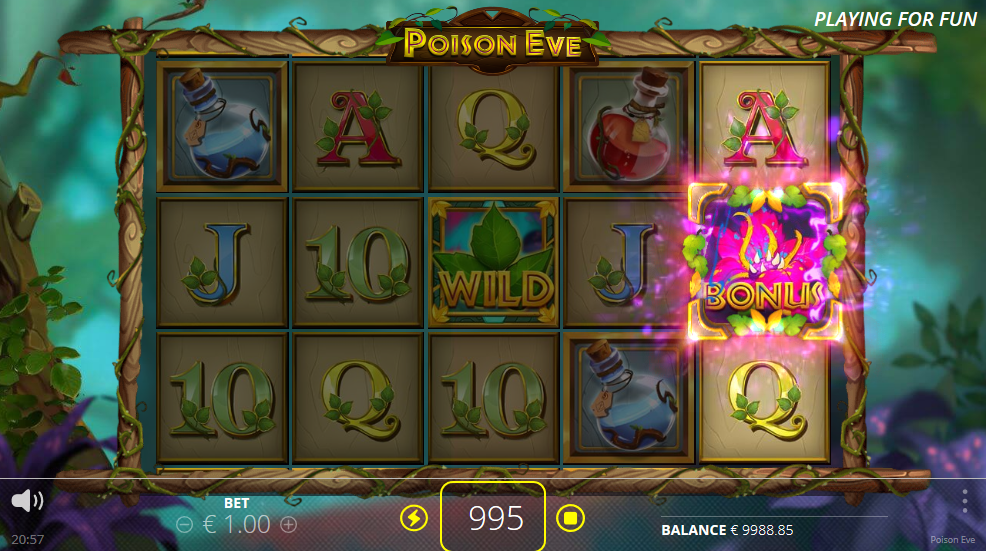 Flower Power is the game’s free spins round. Flower Power is rather more difficult to explain than it is to play. The feature is triggered by landing the bonus flower symbol in the magic ‘portal’ which hovers over the middle symbol on reel 5. After activation between 3 and 12 free spins are randomly awarded. For each spin, the symbol which lands in the ‘portal’ symbol space on reel 5 expands to cover the whole of reel 5 and reel 1. If the same symbol lands on any of the other reels it also expands to cover the entire reel. Much like in the free spins round in the Book of Ra or any of its many clones, the symbols which expand during the Flower Power bonus round work as scatter symbols i.e. they don’t have to appear on adjacent reels to create a winning combination. For example, if the King symbol lands in the portal space on reel 5 and a King also lands anywhere on reel 3 then reels 1, 3 and 5 fill with Kings and payout the same as if reels 1, 2 and 3 were filled with Kings. Sounds complicated but you’ll get it straight away when you play, trust me!

Our Thoughts on Poison Eve

Poison Eve is a very entertaining slot with some innovative features and a bonus round with decent potential. In terms of design, there is nothing outstanding on display, but it possesses a certain charm. Although the biggest wins tend to come from the Flower Power bonus round, both the Liquid Magic and Vine Wild bonuses have the ability to pay well. In fact, during my test spins, I landed Vine Wilds on the three middle reels for a win of several hundred times my bet size.

While I wouldn’t rate Poison Eve as highly as Nolimit City’s December release, Dragon Tribe, it is still another success for Nolimit City who, in my opinion, is going from strength to strength.