Pirates: Smugglers Paradise by Yggdrasil Gaming released on 19.10.2018 is a 5-reel & 5-row online slot with cluster pay and a 96.30% RTP. This is a pirate-themed game offering players a max win of up to 1243x their stake. Pirates: Smugglers Paradise can be played on all devices from €0.2 to €100 per spin and is considered a medium volatility game.

The design of Pirates: Smugglers Paradise is a cartoon-like and ‘fun’ affair rather than a serious or scary pirate tale with the game taking place aboard a pirate ship overlooked by a red pirate crab with a wooden leg, and a hook for a claw. The intro shows the ship sailing into shore with three pirates aboard, with one playing a squeezebox and another wielding a cutlass as the ship’s parrot flaps overhead. Once moored at the pirates’ cove, the game board appears on the ship’s sail with the 5 x 5 symbols flanked on the left by a small board for collecting scatter symbols and on the right by multiplier symbols climbing from top to bottom. There are 12 regular symbols with the four lower value symbols represented by the four card suits. The next four are a hook-hand, a bottle of grog, a cutlass, and a pistol, with the highest value symbols taken by a parrot, a deck-hand, a bearded pirate, and a menacing looking red-haired pirate with an eye-patch. A full board of the red-haired pirate is worth 500 coins. The only other symbol is the scatter symbol which is of a treasure map in a scroll with ‘free spins’ written across it. Throughout the game, some vaguely sinister background music doesn’t quite fit with the cartoon-like design and the occasional whoops of “ah-hah” from the pirate characters. Personally, I’d have thought a jolly sea-shanty would have been more appropriate. 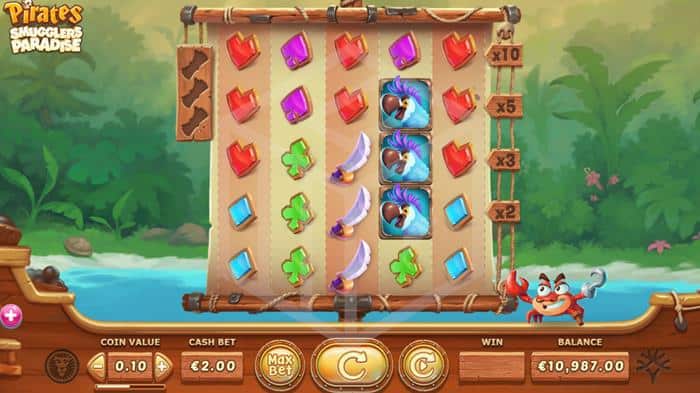 Pirates: Smugglers Paradise free spin round can be a big payer and offers you the chance to pick from three different helpful features before your round starts. All wins during regular gameplay are also boosted by the cascade feature.

As already mentioned, wins on Pirates: Smugglers Paradise are cluster wins which are triggered if you hit 6 or more matching symbols in adjacent reels (note that if two different symbols both make clusters of 6 then the highest symbol pays and the other matching symbols will all change to the higher value symbol). Once you hit a cluster of 6 every other symbol on the board falls away and your winning symbols drop as far down the reels as they can (note that even non-adjacent matching symbols will remain and will now form part of the win). More symbols will now cascade down to fill the empty spaces, and as long as at least one more matching symbol lands, the cascades will continue. Once a full row of 5 horizontal matching symbols is filled the win will have a 1x multiplier applied. The next filled row will be 2 x, then 3x, 5x and ultimately 10x if all 5 rows are filled, meaning a maximum win of 5,000 coins from any regular spin.

3 scatter symbols award 7 free spins in Pirates: Smugglers Paradise, with any additional free spin symbols landed giving the player 10x their stake. Once in the feature, you can choose from three options, each of which helps increase the bonus round winnings 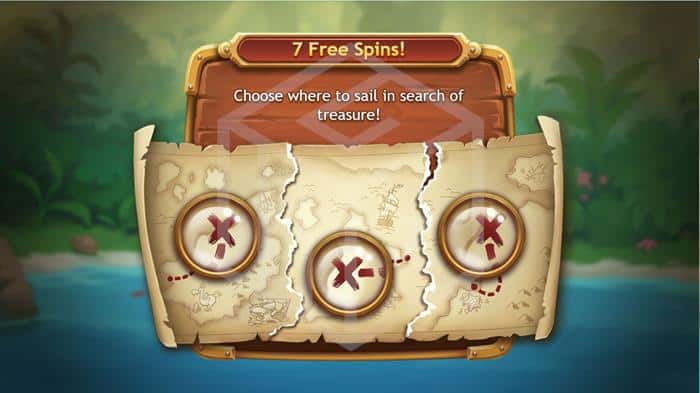 Our Thoughts on Pirates: Smugglers Paradise

Overall we enjoyed playing Pirates: Smugglers Paradise. While the slightly sinister music may be slightly at odds with the cartoon-like design with its happy crabs and jolly looking pirates this is a small criticism. The cluster and cascade wins mean that even a basic base-game win becomes something of an event, and it’s a nice touch having the three options when playing your free spins. Wins are on the low-side but this is to be expected with a low volatility game, and this game will really appeal to the more conservative slot fan as a good, fun, win is never too far away. If you were looking for a more sinister game from Yggdrasil then our advice would be to check out the newly released Dark Vortex.

See all
Gambling Stuff
The reason behind this, is that there are no winning addicts....
4 minutes agoSee more >
4510X on rocket reels
What a result!!! Is there such a thing? Usually they say that beginners get luck...
1 hour agoSee more >
What are the odds for winnings 5000x + in slots?
On this subject I found an interesting article today https://www.americanfoot...
1 hour agoSee more >
Gigantoonz 1100x
Just tried out the new gigantoonz game and got a really nice first 'bonus' 😁✌️...
2 hours agoSee more >