Initially released in September 2019, Pillars of Asgard from NextGen Gaming has an epic Norse theme and comes ram-packed full of features and the potential to unleash a mind-boggling 1,000,000 ways to win.

The standard gameboard on this highly volatile slot comes with a 6x4, 4,096 ways to win reel set. However, it is possible to increase both the number of rows and the number of symbols on each reel to reach those crazy 1m ways to win.

The big wins are most likely to come from the free spins round as this is where those ways to win increase. However, with 10x win multipliers possible during both the base and bonus games there are plenty of opportunities to take home a decent win. Action junkies are also able to bypass the need to trigger free spins through the scatters route with a literal ‘Buy Pass’, where they pay 80x their chosen stake to go straight to the bonus round. Please note the ability to pay for a Buy Pass depends on the jurisdiction in which you’re playing. 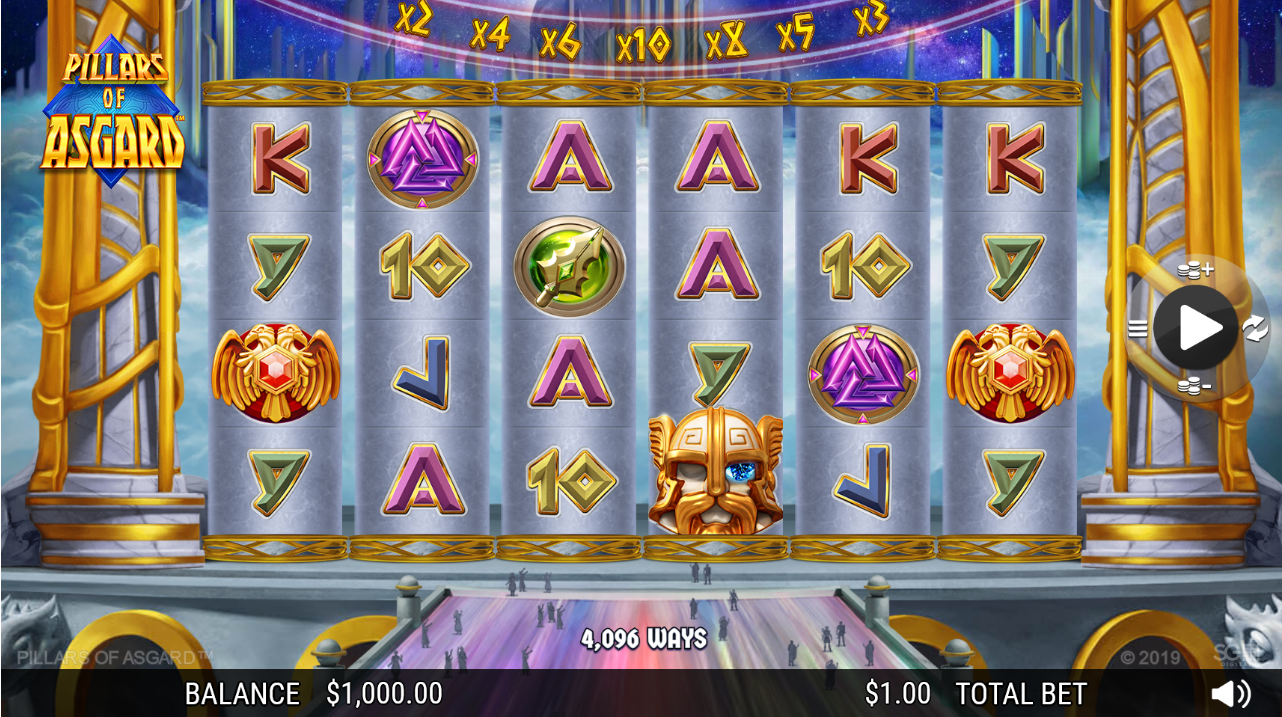 An epic theme needs an epic design and NextGen have come up trumps here. The full vista is only revealed (which you can also see in the intro screen) piece by piece as you increase the number of rows during the bonus game. The gameboard sits on a circular stone stage at the end of a rainbow bridge. That bridge is the mythical ‘Bifrost’ which supposedly connects Asgard (the world of the Aesir tribe of gods) with Midgard (the world of humanity). The reels are guarded on either side by the titular Pillars of Asgard. A curved row of multiplier values sits above the reel set. All around the circular stage stone dragon heads act as fountains. Beyond the stage is a heavenly world of clouds illuminated by the starry sky above. 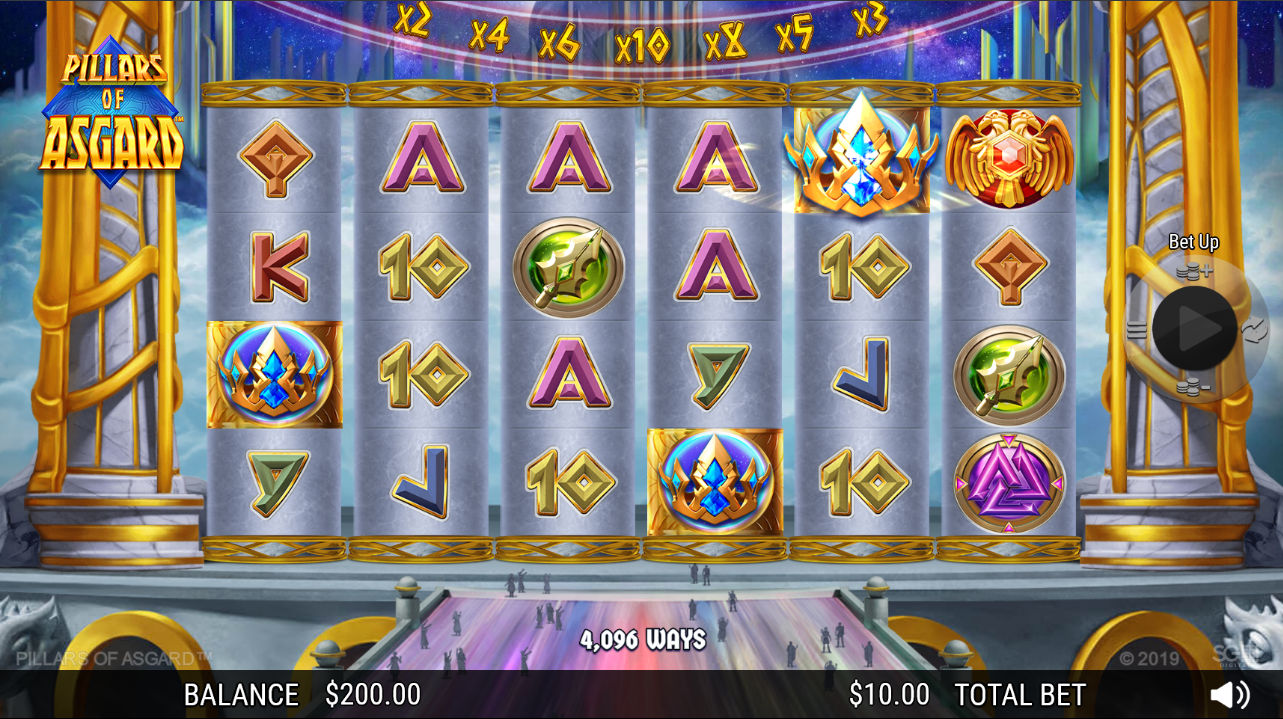 As with the rest of the remainder of the features, Reel Rise is only active during free spins. Every scatters which lands during free spins results in an additional symbol being added to that reel up to a maximum of 10 symbols per row. Only by increasing all 6 reels too 10 symbols can the maximum 1,000,000 ways to win be activated.

A reel reaching 10 symbols in height is rewarded with ‘Odin’s Blessing’, whereupon 5 more free spins are awarded, and future scatters on that reel are transformed into wild symbols.

In the event of all 6 reels reaching their maximum height Rise of Odin is activated. Odin awakens and for every remaining free spin, he will appear as a full reel wild symbol. The full reel Odin wild moves reels with each new spin.

If you fancy buying straight into the bonus round, Pillars of Asgard offers you two routes. Firstly, you can buy straight in, as long as you’re willing to pay 80x your bet size for the privilege. Secondly, you can choose to pay a fraction of that 80x and hope that your gamble pays off. A wheel of fortune is split into green (winning) and red (losing) segments which alter in size depending on your bet. If you choose to bet 25% of the Buy Pass price, then 25% of the wheel will be green and 75% red. Your chances of winning are directly proportional with the % of the asking price you choose to wager.

If you want to check out other slots which are similar and offer a feature buy take a look at our listed feature buy slots.

Our Thoughts Pillars of Asgard

Pillars of Asgard is one hell of an ambitious game from NextGen. They have taken the ‘ways to win’ concept and added a few thousand tons of rocket-fuel to it. The idea of a slot with 1 million ways to win sounds a bit gimmicky, but thankfully the game behind the numbers is engaging enough for it to work. During testing, I was lucky enough to hit some decent wins during the base game, but it has to be said that all the fun here lies in the bonus round. Free spins are where all the truly engaging features lie as they combine to help you on your quest to the magic million pay lines.

This is a very, VERY volatile slot so this must be considered when choosing you stakes, especially if you want to use the Buy Pass feature. While you might walk away very happy indeed, there is every chance you’ll clean out your bankroll if you’re not careful.

For high variance lovers, this game is well worth a punt. It has engaging and innovative features, a solid narrative, and decent potential.