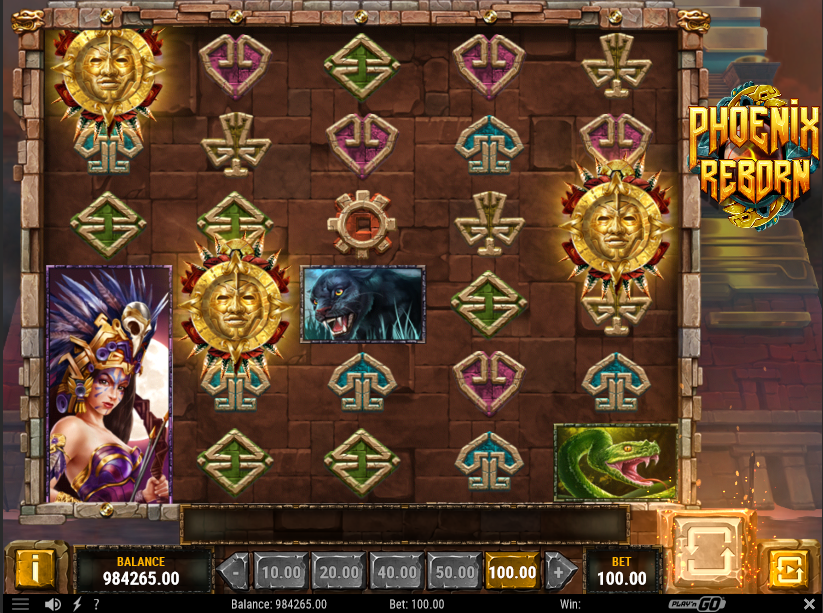 Well it’s a good start from the Swedish provider as once again they have delivered on the visual front – although the scene isn’t exactly original. In fact it’s hard to think of many ancient civilization slots which aren’t set at the foot of a historic temple. This temple, however, is built in a stream – so that’s nice!

The gameboard appears front and centre with the temple visible behind, although it is cloaked in a heady jungle mist. The 5x6 reel set makes for an almost square board framed by mismatching stone tiles. The reels appear to float inside the frame of the gameboard as the ancient stonemasonry which fills the frame and provides a backing to the symbols remains static while the symbols spin on top of them. The artwork for the symbols, the frame, and the brickwork is superbly detailed and visually arresting.

The five low value symbols are stone carvings of the four card suits and a stone carving of the sun. All five have the same value with a max line win of 0.75x stake for 5 on a payline. Mid-ranking symbols are represented by toucans, snakes, and panthers, each paying a max line win of 3.75x the stake. The high value symbols are a male and female warrior, both of whom appear stacked on the reels. The female is the highest value regular symbol, paying 10x the stake for 5 on a payline. The scatter symbol is an Aztec sun symbol and the wild (the most important symbol in this game) appears initially as a glowing sun animation before expanding into an impressive full reel animation of a phoenix surrounded by flames.

Free spins are the only feature present in Phoenix Reborn. They are triggered by landing 3 or more scatters. Landing 3, 4, or 5 scatters across the reels awards 7, 12, or 20 free spins respectively. A further 3, 7, 12, or 20 spins are available for landing between 2-5 scatters during the bonus round. The only noticeable difference between the base game and bonus game is a guaranteed one expanding wild per spin. Needless to say the more wilds in view, the bigger the potential win.

Our Thoughts on Phoenix Reborn

Unfortunately, although Phoenix Reborn is easy on the eye, it’s not so easy to get enthusiastic about as a slot. There just isn’t enough on offer to get us excited. This is especially disappointing given how much we enjoyed Contact - our expectations were simply not met. It’s a shame to be presented with a similarly themed but vastly inferior slot from Play ‘n Go.

Of course, a lack of features isn’t necessarily a bad thing with a highly volatile slot. The problem here is that, certainly in our experience, when you get to that feature it is so very similar to the base game that you can forget you’re in a bonus round. Expanding wilds land regularly in the base game, so a guaranteed wild in free spins doesn’t represented a significant difference.

I’m assuming the RTP during free spins is higher than the base game, but gameplay in both seemed almost identical.

Of course, Play ‘n Go will have tested this ad infinitum and no doubt there are big wins to be had in the bonus round, and with up to 5,000x the stake up for grabs there is no arguing that the game does have potential. Whether anyone will stick around long enough to find out, however, is the real question.