Phoenix Fortune by Greentube released on 21.01.2020 is a 5-reel & 3-row online slot with 50 ways to win and a 95% RTP. This is a asian-themed game offering players a max win of up to 597200x their stake. Phoenix Fortune can be played on all devices from €1 to €10 per spin and is considered a high volatility game.

With the golden coins mounting up around the jackpot amounts, let’s take a look to see what special features are hidden within the Phoenix Fortune. 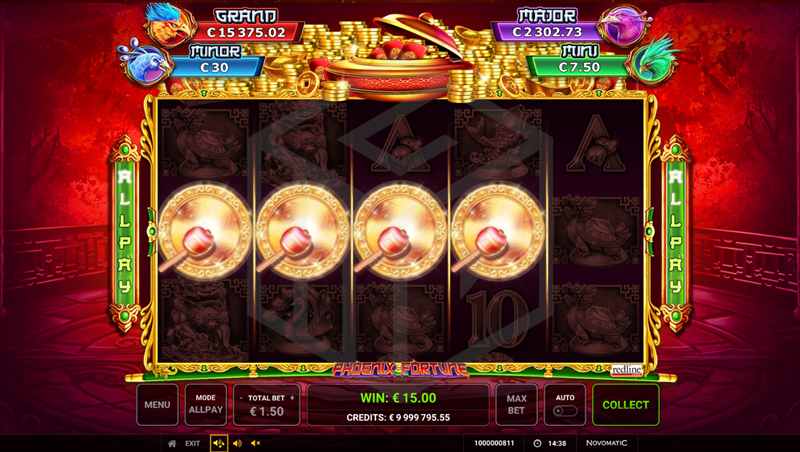 To trigger the free spins round you need to land three or more Gong symbols on the reels. Once the free spins have begun you will have 10 spins to enjoy.

Additional Free Games can be won during this feature.

There are four different levels of the Jackpot - Mini, Minor, Major, Grand. Two of the Jackpots are progressive and will continue to adjust their value throughout gameplay.

To trigger the jackpot you need to land either a Phoenix symbol which is coloured blue or red. Once the feature is activated 12 Medallion coins will appear on the screen. The 12 coins are made up of 4 different coloured birds - Red, Purple, Blue and Green, to represent one of the different jackpots.

To uncover the coins you need to select them. If you manage to match three of the same Medallion coins together will award you with one of the four jackpots. 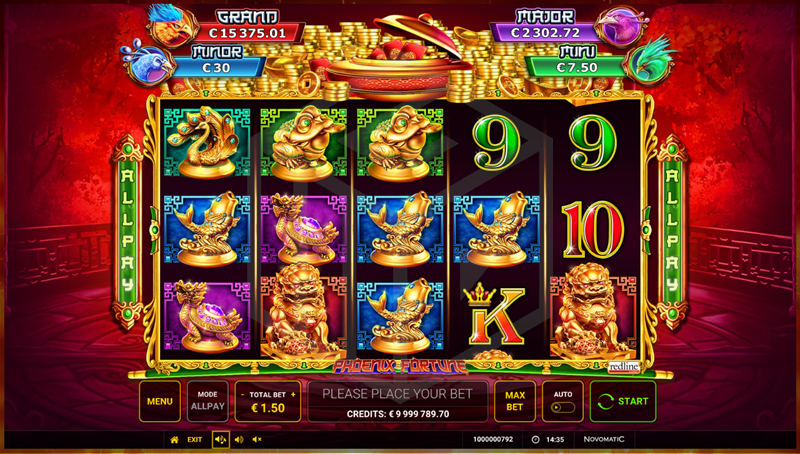 The design and symbols of Phoenix Fortune follow a very Asian theme, set in one of the majestic parks away from the hustle and bustle.

The background track also sounds very authentic, although it is very calming and soothing to listen to, which playing the slot game.

Around the top of the reels, is a pot overflowing with golden coins, which are mounting up around the four Jackpot balances. Seeing the coin there gives you a sense of excitement that you could land one of those jackpots and have all those coins.

The highest paying symbols are denoted by the different animals which represent Asian culture - lion, turtle, frog and koi fish, whereas the lower-paying symbols consist of 9, 10, J, Q, K and A.

With stakes between €1 to €10 per spin, the slot can appeal to all players, although €1 may be a little steep for some players and vice versa.

The Phoenix Fortune has the ability to be a great hit with the players and Greentube should be proud of their new release.