Having been distinctly unimpressed by the design of Merkur’s 2017 horror release, Vampire, it looks like they’ve upped their game a little with Night of the Werewolf with some detailed and unique animation. The backdrop of a wet and windy isolated moor lit only by a full moon sets the scene nicely, with the game board centre-stage offering up some superbly detailed symbols.

The low-value symbols are represented by the card values 10, J, Q, K, and A, and a nice touch here is that the design of these symbols appears almost like slashes across the screen rather than in a standard font. The higher value symbols take the form of a dagger, a crossbow, a smiling thick set guy in a dinner jacket, and a more serious looking man in a regular jacket. The second man is the highest paying symbol and pays 1000x the stake for five in a row. The wild and the scatter are the same symbol, a hugely impressive Werewolf who glows when he lands on a reel while his eyes temporarily shine blood red. 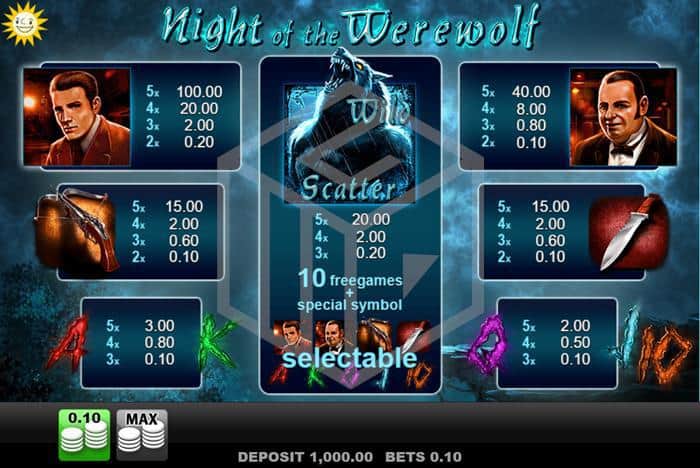 As with the aforementioned ‘Vampire’ slot by Merkur, there is one main special feature, the free spin round, and a side-feature enabling you to gamble wins made in the base game.

Wins made in the base game can be gambled, either by correctly guessing the colour of a card chosen randomly from a deck, or by gambling up a ladder with increasing cash values up to a maximum of €140. As games on Night of the Werewolf are capped at €10 per spin this feature works a lot better than it did on Vampire where high rollers who could wager up to €100 per spin found themselves with no use for a gamble feature with a €140 maximum win. It’s worth pointing out at this stage that unlike previous Merkur slots, Night of the Werewolf pays out for two of a kind for any other the higher value symbols

Land three or more wilds/scatters and you enter the free spin feature where you are rewarded with 10 free spins which can retrigger indefinitely. Prior to starting the spins, you must select one of the symbols to act as your special symbol which will then have the capacity to expand across the entire reel if they land during the free spin round. Hit one on each reel and you can fill the board with your special symbol. For a better chance of hitting a few wins, you can opt for a low-value symbol, but it may well be worth the risk of opting for a high value (but significantly less prevalent) symbol as this is where the big money lies. Fill the board with 5 of the highest value symbols and win up to €50,000 on a single spin. 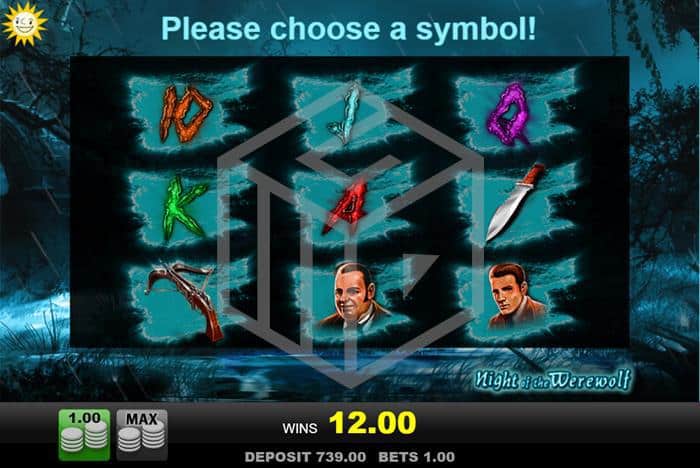 Our Thoughts on Night of the Werewolf

As with other Merkur 5 pay line slots, you know you’re not going to be booking wins every other spin, and you also know you’ll probably have to bed in for a fairly lengthy session if you want to see a few bonus rounds. However, as with Vampires, Night of the Werewolf can pay out big time with just one free spin round if you get the run of the reels. It’s also nice to see some improvements made from Merkur. Awarding wins for two of a kind for the high-value symbols means exponentially more wins to keep you interested than in previous releases. Also, the design and graphics have taken a significant step in the right direction. While this high volatility slot isn’t going to be for everyone, especially special feature junkies, if you’re prepared to put the time in and crave that big pay-off, this might just be the slot for you.