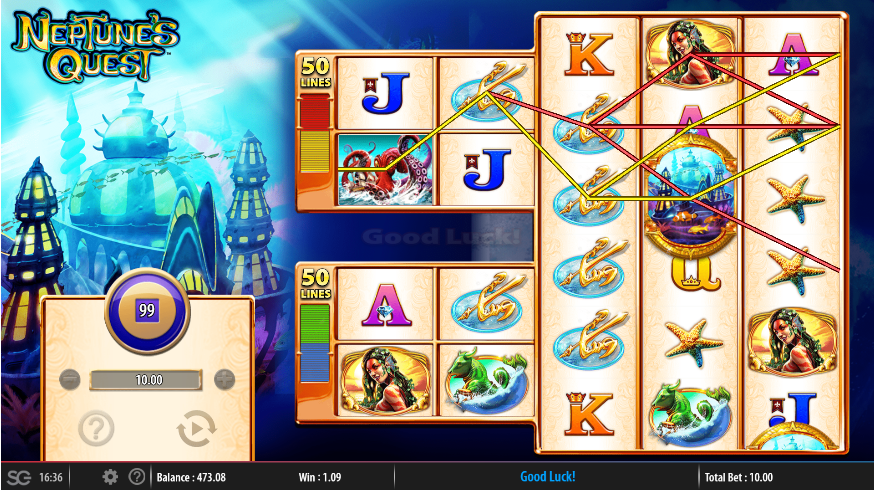 WMS are not renowned for the aesthetic quality of their online slots, with many of them transitioning almost without any design changes from the land-based casino cabinets where they first appeared. Neptune’s Quest is very much of this ilk, although to be fair the artwork isn’t too bad. The first third of the screen shows futuristic underwater buildings, with the gameboard filling much of the remaining screen space. Gameplay is accompanied by the occasional underwater sound effect, and the simulated mechanical clunk of the reels.

The gameboard and reel mechanic has been seen before with WMS games such as Fire Queen and Elvis: The King Lives and it never fails to baffle. The first 4 “reels” are in fact a 2x2 block where each symbol is its own reel. Another 2x2 block sits a little way und6erneath the first contains the next 4 “reels”. Both 2x2 blocks (referred to as reel columns) are attached to a regular 3x6 reel set to their right and between them 100 fixed paylines are created. This is a complicated set-up to say the least.

Free spins are awarded by three different combinations of symbols:

Our thoughts on Neptune’s Quest

Neptune’s Quest is a bit of a damp squib in all honesty. The design and graphics are left wanting, the reel set-up is unnecessarily confusing, there is a distinct lack of features, and the pay-outs are too low.

The base game can be a total drag with hardly any wins even covering the cost of the spin. Occasionally the reel columns will connect with a couple of rows of stacked wilds for a semi-decent win, but mainly you’re playing for the free spins.

Despite the different ways to trigger free spins, it will almost always boil down to the 3 scatters awarding the minimum 5 spins. These can pay well, but that will almost certainly necessitate connecting a win with the extended wild – and quite often that doesn’t even show up. Several of my hard-earned free spins rounds resulted in a win which barely covered the cost of one regular spin.

With a max win of only 500x there just isn’t enough to keep this game interesting for my liking.