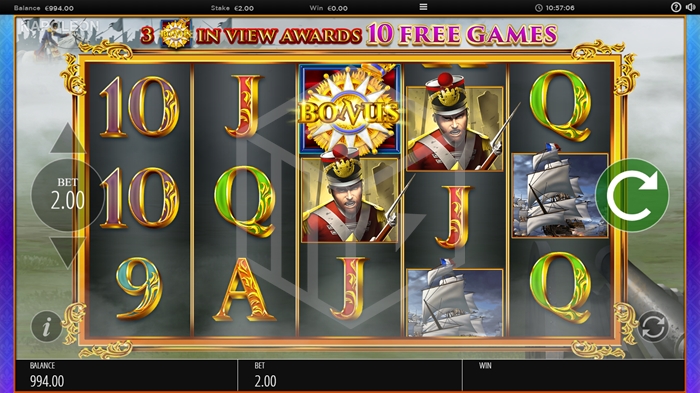 Napoleon has a crisp design with a detailed animation in the back ground of a gloomy battlefield. A cannon fires towards an advancing, silhouetted, cavalry in the distance as the gun smoke drifts across the battlefield.  An officer on a white horse (maybe Napoleon?) can be seen commanding his troops onward through the desolate, misty field.

The golden framed game board dominates the screen and has dark, translucent reels. In keeping with its dramatic theme this slot has a somber, ethereal backing track complete with harrowing, almost operatic chanting vocals.

Card values 9-A represent the lowest symbol values. Cannons, horses, and galleons take up the middle ground, while the highest value symbols are a cavalryman and Napoleon himself. Napoleon, who also doubles as the game’s wild, pays a staggering 5,000x the stake for five of a kind.

The cavalryman is the most valuable standard symbol paying 200x the stake for five on a payline. The scatter is a gold bonus symbol which only appears on reels 2, 3, and 4.

How To Play Napoleon: Rise of An Empire

Learn more about the special features of this video slot before you try it out.

Multiplier wilds increase wins in both the base game and the bonus game. Battle Cry reel modifiers also offer great opportunities in both games, while the free spins round contains a lucrative “Bonaparte Streak”.

The Napoleon wild not only substitutes for all symbols (except for the scatter) but also acts as a win multiplier. Land one wild which helps form a winning combo and it will double the win. If two, three, or four wilds help form a winning combo then that win will be multiplied by 4x, 8x, and 16x respectively. As previous noted, land five wilds on a payline and you’ll hit the jackpot win of 5,000x the stake.

On any random spin the screen may fill with a large animated image of Napoleon roaring a battle cry. This will activate one of two separate reel modifiers: 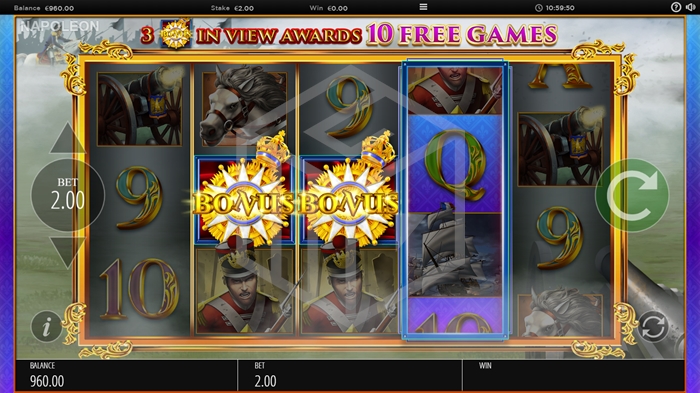 Land 3 scatters and you’ll be awarded 10 free spins. It is possible to retrigger the free spins once by landing 3 scatters on any one free spin. During free spins the Napoleon Streak feature will also be in play. After any free spin win the ‘Napoleon Streak’ will hold all winning symbols in place while a free re-spin is awarded.

Our Thoughts on The Napolean: Rise of An Empire Slot

Napoleon:  Rise of an Empire is an impressive release from Blueprint Gaming. For a medium variance slot there is some great potential with a 5,000x stake jackpot as well as some great features. It’s a fairly simple game to understand and contains fewer features than your average Blueprint slot.

However, that’s not necessarily a bad thing, especially if you’re a serious grinder looking for potential rather than an abundance of features – and the features it does have add great value.

The multiplier wilds can really take your winnings to the next level, and the Napoleon Streak has great potential in the free spins round. It would have been nice to be able to re-trigger the free spins more than once but that’s a small quibble in an otherwise entertaining slot.