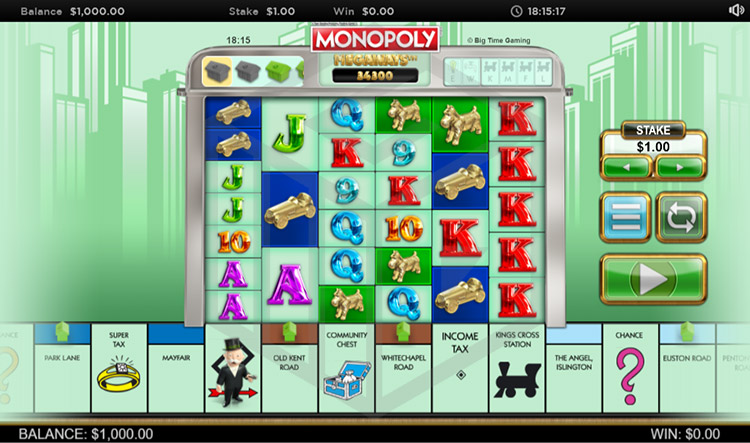 I won't give you any guesses as to the design of this particular slot. Of course, it is based around the characters, streets, and properties of the classic London version of the Monopoly board.

Given the original game was set in New York this makes sense, although as I noted this slot actually uses the London version in the Reel Adventure part of the game.

The Reel Adventure part of the game sits under the gameboard running from the left side of the screen to the right. It contains the active squares on the gameboard with Mr Moneybags progressing along the streets as you play.

Above the reels are meters indicating the number of properties on any given street and the stations & utilities.

The lowest value symbols are the standard playing card values from 9 to A. The higher valued ones? Monopoly's iconic counters; the dog, car, ship and top hat.

The top hat is the most valuable, with 6 across a pay line worth 50x the stake. The wild is a golden "M" on a rainbow coloured square, and there is no scatter symbol.

The Reel Adventure™ part of the game is where you'll find all sorts of modifiers and features to enhance your chances of winning.

Whenever you land a win, Mr. Moneybags strolls around the board. Land on a station or a utility company and you own it.

Landing on a property on your second reaction adds a house to it, with every further response adding a new home.

It's worth noting these additional elements which come into play upon triggering free spins;

During the free spins bonus round further free spins and win multipliers are up for grabs.

They too are arrived at via modifiers during the Reel Adventure™ and are triggered as follows;

Our Thoughts on Monopoly Megaways

Now, if you've come to this review to get a taste for the game without playing it and are a little, let's say, overwhelmed by the amount of information to digest, try not to be. Like the board game itself, you just need a couple of scoots around the board and everything slots into place.

To me, this is the perfect Megaways™ slot, combining great potential with excellent mechanics and a superb video game narrative. Not only does it utilize reaction wins and the unlimited win multiplier mechanics, but it has also found a deserving home for BTG's Reel Adventure™.

While I enjoyed Holy Diver's Reel Adventure™, I found the narrative a little weak and lacking cohesion.

The game of Monopoly suits this format down to the ground, and it works brilliantly.

Perhaps it won't suit the kind of grinder who just wants to spin the reels to hit useful and straightforward features before resuming the grind. – But in my opinion, those guys need to lighten up!