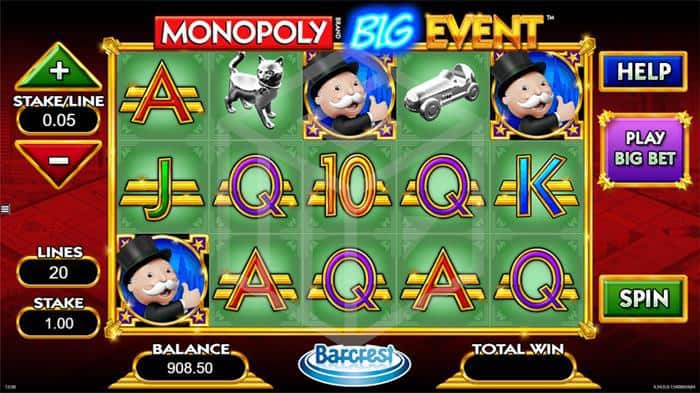 You kind of know what to expect with a Monopoly-themed game, namely an appearance by Mr Monopoly, a monopoly board, and a selection of monopoly characters. The game board is a regular green 5 x 3 board with the slot name above it. In the hazy red background, you can make out a monopoly board. The music accompanying gameplay is an infectious funky electronic looped beat. The low-value symbols are taken up by card values 10, J, Q, K, and A while the higher values are represented by the monopoly dog, cat, car, and ship, with the highest value symbols being Mr Monopoly and the purple wild symbol, both of which award 200x the bet size for 5 of a kind. The other symbols which may appear are the ‘Monopoly Big Event’ scatter symbols which only appear on reels 1, 3, and 5, and the ‘In Jail’ symbol, although this only appears during the bonus round.

Monopoly Big Event benefits not only from a great free spin round with additional features but it is also one of those rare slots to offer a “buy-a-feature” bonus where you can pay a larger than average stake to go straight into the feature which in this instance is called “Big Bet”. 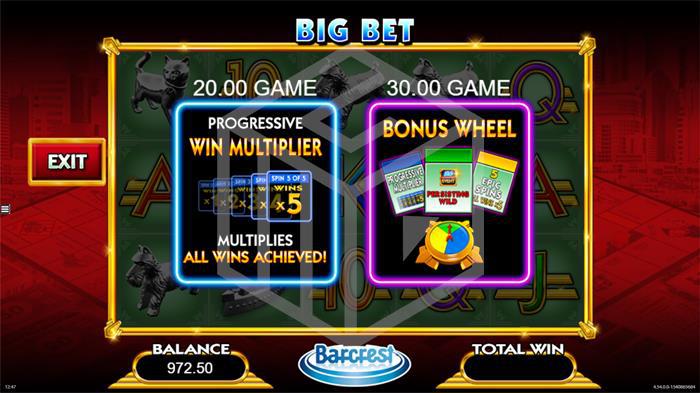 If you’re willing to stump up either €20 or €30 you can choose from one of the two Big Bet options, both of which offer an increased RTP of 99% 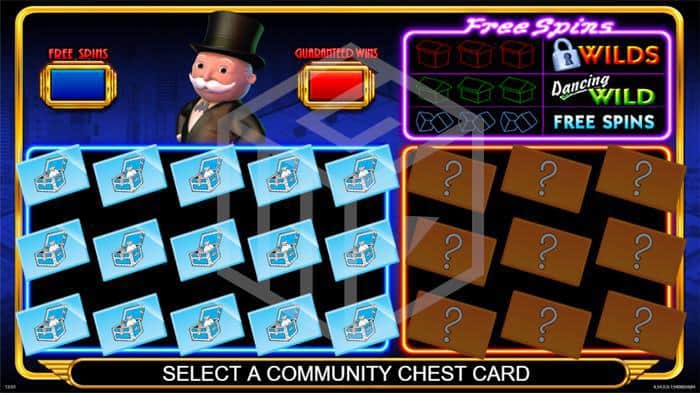 Land 3, 4, or 5 Big Event scatters (although they only appear on 3 of the reels they can be stacked) and you’ll enter the Big Event, which is basically a free spins round with a little bit of admin to do first to determine who many spins and guaranteed wins you’ll be getting. Before spinning you must choose alternately between a batch of community chest cards on the left and a batch of chance cards on the right. The community chest cards reveal either a number of free spins or a number of guaranteed wins, whereas the chance cards reveal either a house, a hotel, or a pair of dice. Once you have picked three matching chance card symbols your spins will begin. If you picked three houses first you will be awarded Dancing Wilds throughout your free spins (during each spin you’re guaranteed for one random reel to become an expanded wild). If you picked three hotels you’ll be awarded Locked Wilds where any wilds landed during your spins will remain in place for the duration of the round. Hit three dice cards first and you’ll just head off to the free spins with regular wilds. If you managed to land 4 scatters to enter the Big Event you’ll get a “House Sneak Preview” whereby you’ll be shown where the house cards are from the chance pack, and if you landed 5 you’ll get a “Hotel Sneak Preview” showing you the positions of the hotel cards. A handy additional extra if you want to guarantee yourself some added value wilds. Every time you land the ‘In Jail’ symbol during your free spins one of the lower value symbols will disappear from the board, giving you a better chance of securing a bigger win. Every time you land a win during your free spins one of the ‘guaranteed wins’ you picked up from the community cards will go. If you manage to end your free spins but still have some guaranteed wins remaining then you’ll play an extra game where you’re guaranteed a good win. The more guaranteed wins you have left at the end of the free spin round, the bigger the guaranteed win, will be.

Our Thoughts on Monopoly Big Event

As Monopoly-themed games go, this is a cracker. The “buy-a-feature” option is great for players with a bit of a bigger bankroll to get a quick fix of some feature action, and with an RTP of 99%, it’s just about the biggest ROI you’ll see for any slot. Also, the main bonus game offers plenty of chances for you to win and is more interactive and engaging than most features, especially those offered by some other Monopoly games.