Play‘n GO’s design is suitably retro with a background comprising of a huge surrounding bank of archaic computers with green pulses shooting across large screens, big flashing buttons and a set up you’d expect to find at mission control at NASA in the late ’60s. The gameboard is a fairly generic affair with grey reels and a blue border. The background music borrows heavily from Mission Impossible. Overall this is a competent design, but Play‘n GO have certainly done better.

Low-value symbols are the standard four playing card suits. High-value symbols are agent’s Green, Purple, Red, and Blue. Agent Blue is the most valuable with 5 on a payline worth 50x the bet size. The game does feature wilds and a scatter symbol (a handgun with a silencer), although these are activated as part of the game’s special features which are explained in detail below.

During every spin, a crosshair moves randomly across the board. Landing the crosshair on certain symbols at the end of a spin triggers the following two features. 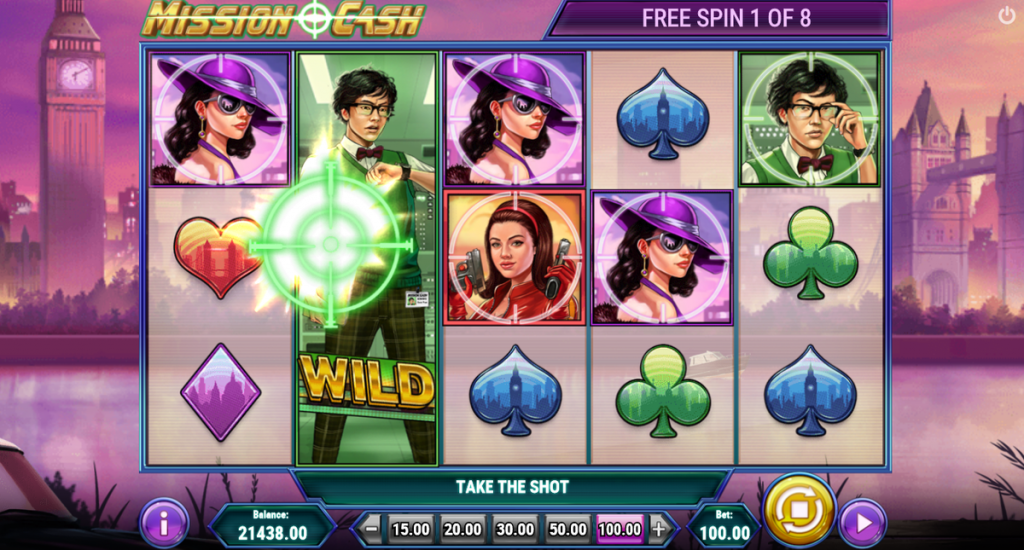 Our Thoughts on Mission Cash

Mission Cash is a competent game from Play ‘n GO. The design is perfunctory but nothing special and it is a little short of features, but the game plays well and the base game feature triggers regularly enough to stop it becoming boring. The game also has some decent potential, and while it’s unlikely to feature on too many “Big Wins” compilations, the variance is high enough to bring rich rewards to those who get lucky.