Compared to the WMS Money Burst games this NextGen incarnation is streets ahead design-wise. The slot’s setting is at night in a magical, mystical forest. Large trees stand either side of the gameboard with crops of magic crystals sprouting from the ground and a couple of swirling balls of electrical light up above. The soundtrack is an eerie collection of chimes, falsetto choir voices, owl sounds and general dark, spooky forest noises. The gameboard has translucent reels and is framed in purple twine.

Superbet is an optional feature which is exclusive to NextGen gaming. Essentially it is a way of increasing your potential win by placing a wager which improves winnings in the event of a win landing which contains a wild symbol. There are five different bet levels to choose from;

Furthermore, using the Superbet feature increases the overall RTP with each new level. The game’s standard RTP of 95.5% increases by 0.25% per level to a maximum of 96.75% for Level 5.

Merlin’s Held Respins is by far the most common feature to trigger in the base game and is activated by landing identical symbols (or identical symbols + wilds) in the first four positions. The four identical symbols stay in place while the rest of the reels respin 5 times. Merlin may appear after a spin and change any symbol wild. If three scatters land during the respins, the feature is fully retriggered. 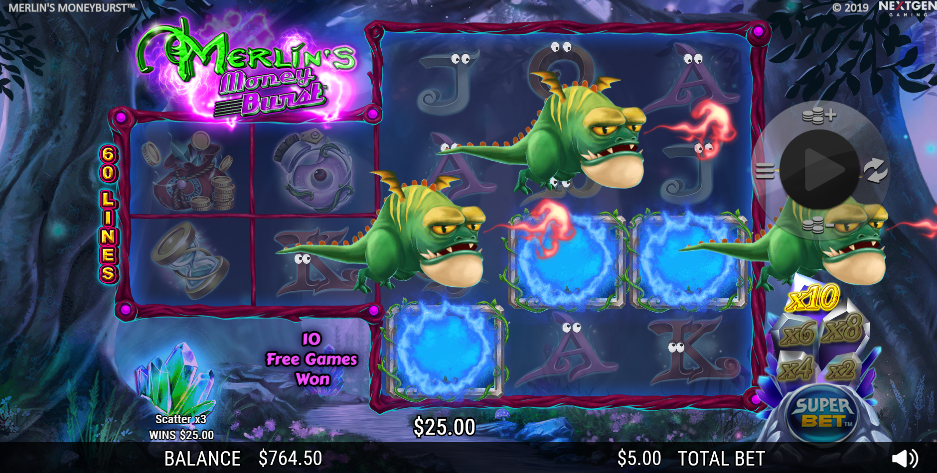 By far the most lucrative feature, 10 Merlin’s Wild Spins are activated by landing identical symbols on the first two reels AND landing three scatters. The first two reels will turn wild throughout the spins and Merlin will appear on every spin to award random scatters across reels 3-5. Once again this feature can be fully retriggered.

Our Thoughts on Merlin’s Money Burst

Merlin’s Money Burst is essentially a reworked (and much better looking) version of the WMS classic Bruce Lee with the same board set-up and features. The addition of NextGen’s Superbet is a nice addition for those who prefer a little volatility in their slots. The free games are a little bland, considering how hard they are to trigger. In fact, I tended to win more from the far easier to acquire Held Respins. It’s the Wild Spins where the real potential is to be found, however. With wilds covering the first two reels and stacked wilds appearing with tremendous regularity on reels 3-5, Merlin’s Wild Spins never fail to please – especially if you’ve opted-in for the Superbet feature.

All in all, this is maybe a clone, but it looks good and it improves on the original.