There are plenty of slots named after this Greek Mythological snake-haired gorgon, but NextGen was the first to release the original Medusa slot in 2012.

Medusa plays on a 5x3 reel set with 25 fixed pay lines and a published RTP of 95.42%. Unusually for an older slot, Medusa players are spoilt for features.  There is a dual-layer free spins round, a base game pick feature, expanding wilds, and also a gamble option. You can play Medusa at participating casinos from €0.25 to €125 a spin. 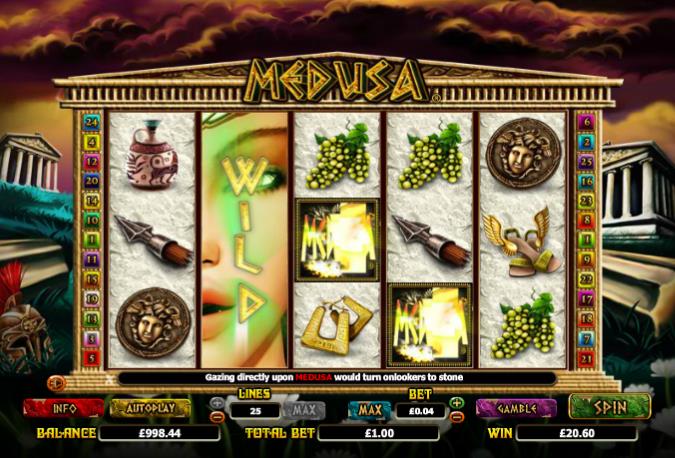 The game board is framed so as to appear inside a Greek Temple. There are more temples in the distance upon grassy hill tops and dark storm clouds overhead. The background artwork is competent but a little simplistic, but about standard for a 2012 slot. The symbols and background within the actual game board, however, are well drawn with nice detailing.

The low-value symbols are represented by a dagger, a bunch or grapes, a clay urn, winged sandals, and gold earrings. High-value symbols are a snake, an ancient coin, a battle scene, and a temple. The temple is the biggest payer rewarding 200x the bet size for 5 on a pay line. Medusa acts as both the wild and a trigger for the ‘turned to stone respins’, while the game’s logo is the scatter symbol. There is also a Pegasus symbol only appearing on reels 2- 4 which can trigger a pick me a bonus. A soldier symbol completes the set but he only appears in the bonus round and only on the third reel. 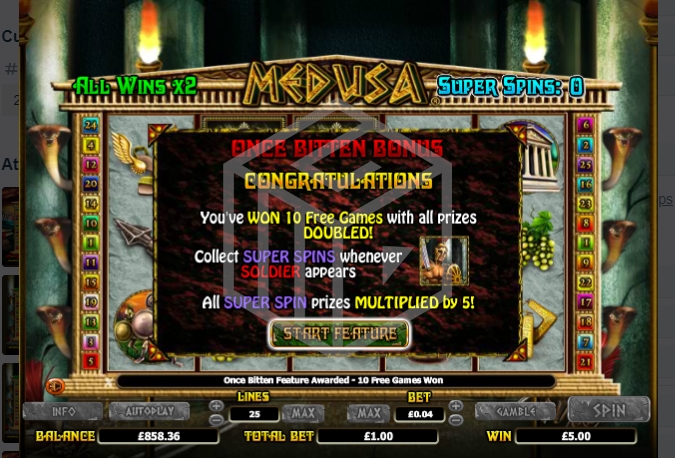 Medusa is rife with specials including a pick bonus, expanding wilds, a free spin round with potential additional super spins, and a gamble feature.

Land 3 Pegasus symbols on reels 2, 3, and 4 to trigger this bonus. Pick one of the three symbols to reveal a cash prize up to 50x your stake. Lucky players might get to pick again or even reveal a ‘Win All’ extra bonus.

Our Thoughts on Medusa

For a 7-year-old slot, the original Medusa isn’t half bad. The design is passable with some nice detailing on the symbols and game board. There are multiple features to keep the player entertained, and there is decent potential in the bonus round. Hit a run on the Super Spins and it is possible to bag a big win. Perhaps not enough potential to keep the high variance players around, but then again there is always the gamble option. Even in today’s competitive marketplace, we believe there’s certainly still plenty of room for Medusa and her head full of snakes.