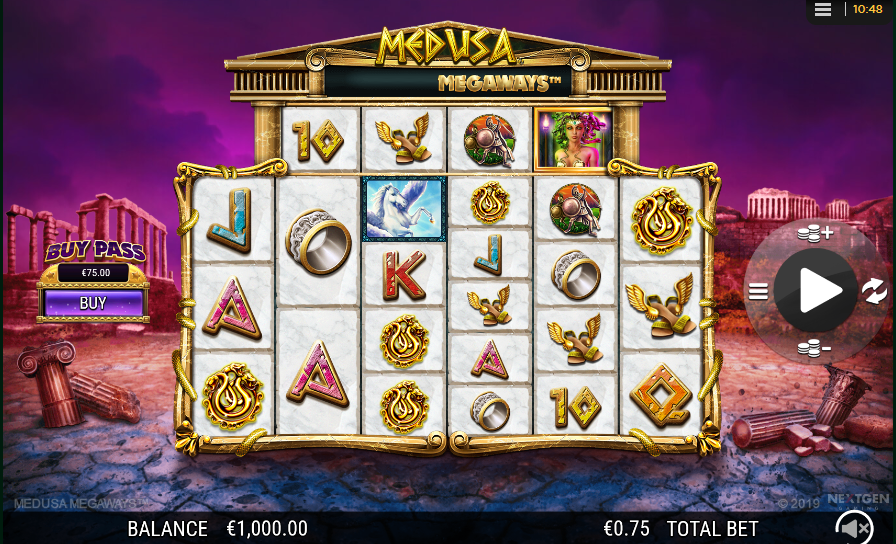 NextGen have stayed true to the original game here with the design, graphics and symbols all mirroring the original game. Sometimes we might lambast developers for using dated visuals, but with a classic such as Medusa it’s like visiting an old friend in a new home – different but still familiar and comfortable.

The gameboard is once again housed inside a temple, with the symbols spinning on blocks of white marble. The reel set up is the same as many other MegaWays slots such as Bonanza, Diamond Mine etc., with 6 reels and a special reel of 4 horizontal symbols added above reels 2-5.

The backdrop shows Greek ruins in the foreground with an ancient temple sitting high on a hill in the background. A brooding purple sky above is intermittently lit up with forks of animated lightning. Even the haunting soundtrack remains the same. I guess, as they say, “If it ain’t broke, don’t fix it”.

The low value symbols are the 10-A royals, with high value symbols represented by sandals, rings, golden snakes, armoured soldiers and Pegasus the mythical winged horse.

Pegasus is the most valuable with 6 in a row worth 30x the stake. The snake-haired Gorgon herself (Medusa) is the wild and the scatter is the game’s logo.

There is also a special soldier symbol which only appears on the top row during the bonus round.

As well as old MegaWays favourites such as cascading reels and unlimited multipliers during free spins this slot also benefits from Medusa’s Gaze, Snake Strike, Buy-a-Bonus, and a Temptation feature

A MegaWays staple, symbols cascade down rather than spin on the reels. Symbols from a winning combo disappear after the win is counted and are replaced with new symbols cascading from above. If a new win is formed the cycle repeats and so on and so forth until no new win lands.

When a Medusa Wild lands in the top row it may expand to cover the entire reel before vanishing and leaving one or more additional wilds in its wake.

3 scatters award 10 free spins, with each additional scatter adding a further 5 free spins. Free spins start with a 2x win multiplier and a 1x win multiplier is added every time a winning combo lands. Win multipliers continue indefinitely throughout the bonus round, only returning to 1x at the completion of the round. 3 more scatters landing during a free spin will re-trigger with another 10 spins

During the free spin round snakes appear either side of the extra reel.  If a special soldier symbol lands on the extra reel then it will be attacked by a snake and transformed. The left snake attack will transform the soldier into a Medusa Wild, whereas the right snake attacked will transform the soldier into a scatter symbol. If the Medusa Wild creates a winning combo Medusa’s Gaze will come into effect, thus creating a larger win.

At the conclusion of the free spins round the Temptation Feature offers the opportunity for the free spin round to be replayed in full. You can choose to take your winnings or take your chances and play the entire round again.

For the thrill seekers among you, it is possible to buy straight into the free spin feature in Medusa MegaWays with the Buy Pass feature. Buying straight in costs 100x the chosen stake and has the benefit of increasing the RTP from 96.28% to 97.63%.

Our Thoughts on Medusa Megaways

This is a smart release from NextGen. MegaWays slots are still very much in vogue and applying the new mechanic to an old classic has the advantage of attracting players across the board. Furthermore, by keeping in place some of the original game’s features Medusa has managed to add still further to the appeal of this Megaways slot.

Some aren’t keen but I’m a big fan of slots which offer a Buy a Bonus feature, especially on high variance games. If you’re a thrill seeker who enjoys a punt then they offer a quick burst of adrenaline and the chance to win big. If you are looking for more feature buy slots, check out our listed feature buy slots. As well as the higher RTP on offer for the ‘Buy Pass’ the Temptation feature is always on hand if your first attempt is a dud.

With a potential max win of 50,000x the stake this is also a slot with immense potential.  What more could you want?