Fantasma describes the gameplay as ‘otherworldly’, and there are some elements of the design which fit with that assessment. Set in an endless desert, the Bedouin tent in which the game is played is lit with hanging lanterns and strings of pearl bulbs lining the billowing roof. Exotic looking cushions of all shapes and sizes are elegantly positioned around a central table. The gameplay is accompanied by a soundtrack you can imagine playing while Lawrence of Arabia and his companions appear over the horizon on camelback. During the free spins round the sides of the tent disappear and it appears, to be replaced by a star-filled night sky – almost as if the entire tent has become a luxury flying carpet. The gameboard is a little less elaborate, relatively small in comparison to most 6x6 grids/reel sets, containing a selection of square or oblong gemstones.

Low value symbols are grey, plum, and green gems. Medium value symbols are blue, purple, and maroon gems. High value symbols are emerald, sapphire, ruby, and black gems. The high value gems are also adorned with gold symbols; a triangle, a crescent moon, a star, and a diamond surrounded by a golden snake. The black gem is the highest paying, awarding 30x the bet size for 6 adjacent symbols. The wild is a multicoloured gem which only appears on reels 2-5. There is no scatter symbol as such, but if a spinning medallion appears in front of the game board and lands on the gold face one of the game’s main features are triggered. These are collectively known as ‘Stone Features’.

A very familiar mechanic for any fans of Megaways™ slots, perhaps more commonly known as cascading symbols, the reels drop in ‘Avalanches’, meaning that winning symbols are removed from the grid after a win and the spaces left are filled by symbols falling from above. Avalanches occur in both the base game and free spins bonus and continue as long as new wins are formed.

Expanding Wilds are one of the ‘Stone Features’. After the Golden Medallion has appeared in front of the gameboard it randomly chooses which of the three stone features to activate, one of which is expanding wilds. While activated, all wild symbols which land expand to cover the entire reel and are allotted a multiplier value of between 2x and 6x.

Void Respin is another stone feature, only possible after the appearance of a Gold Medallion. A green diamond landing on the reels triggers the Void Respin. When the green diamond lands it shoots around the board destroying between 2-10 non-winning symbols (except the wild) which are then filled by an Avalanche.

One active, both Expanding Wilds and Void Respin continue to appear until a spinning medallion lands on the silver face, thus ending one or more stone features. 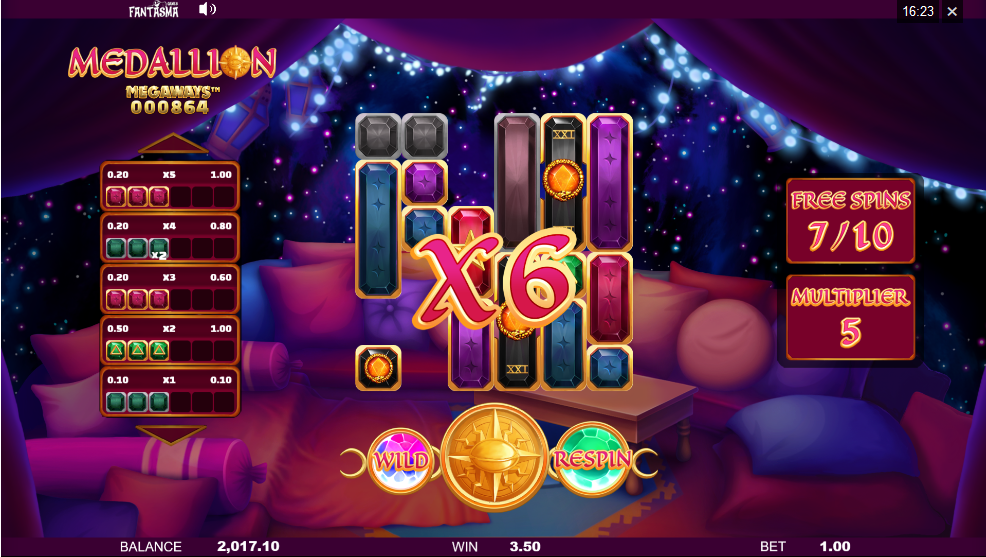 The Gold Medallion also activates free spins, awarding 10 free spins with no retrigger. As already noted, during free spins the increasing win multiplier doesn’t reset after a losing Avalanche, meaning that much higher win multipliers are possible than in the base game. Also, all stone features are active throughout the free spins round. Expanding Wilds and Void Respin remain active after free spins end, only deactivating upon the appearance of a Silver Medallion.

Our Thoughts on Medallion Megaways™

Whether you enjoy Medallion Megaways™ will most likely come down to whether or not you like your slots hugely volatile with big wins or a little more sedate but with plenty of small to medium wins along the way. If you’re in the first camp, then this probably won’t be for you. Based on experience I would put this game on the lower side of medium volatility. Small wins arrive very regularly, and the features are not the hardest to trigger, even the free spins.

Out of the features, I triggered I experienced some enjoyable features wins. However, I also ploughed through a lot of disappointing feature wins, including a fair few from free spins. Compared to Fantasma’s first Megaways™ slot, this is very tame indeed. And while this will make it a lot less attractive to hardcore slot players, I can see it being a hit among the more recreational players, as the wins do come thick and fast, meaning that your bank balance stays fairly robust for some time. It is more than likely that this is the market Fantasma are aiming for here, and if that is the case then it is a job well done.